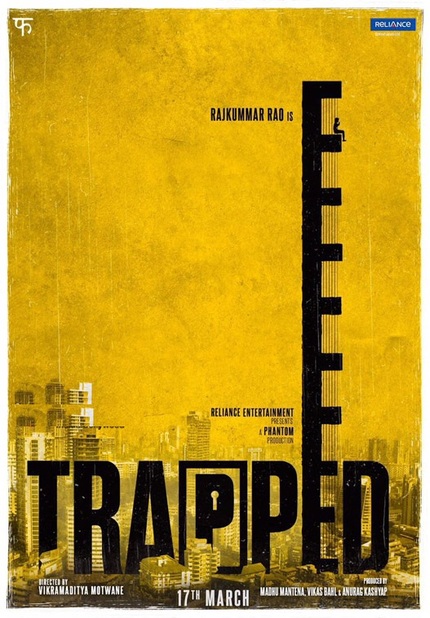 Vikram Motwane's Trapped is the story of a man who becomes locked in his flat hundreds of feet above the bustling metropolis of Mumbai with no one to save him or even miss him. When the story first became apparent through the release of the trailers and other pormotional material, there was an immediate backlash against the seemingly preposterous nature of the plot. How could a man get stuck in his flat and have no one looking for him? Well, more than simply a skyscraper-set rehash of Castaway, Motwane's films explores the nature of loneliness and the fact that it doesn't matter how many people you are surrounded by, you can still disappear very easily.

Rajkummar Rao (Shahid, Aligarh, Kai Po Che) is Shaurya, what the Japanese would call a "salaryman" at a middle of the road Mumbai office. As we first meet him, Shaurya is desparately trying to woo his officemate, Noorire (Geetanjali Thapa, Liar's Dice) over the office phone. While she seems disinterested at first, she becomes intrigued by his general good nature and the two of them strike up a romance. When Shaurya suggests that they marry, he is smacked in the face with the reality that she is already betrothed and her wedding is imminent.

Desparate to cling to the one thing that he feels makes his life special, Shaurya decides with Noorie that they'll move in together and live the life they want. The only problem is that he can't afford the kind of flat that would make him and Noorie happy, even after approaching every broker he can think of. Serendipity strikes as he is leaving what he believes was his last chance and he runs into a man who says he can get him the flat he wants for the price he can afford. There's one little catch, the flat is in a building that hasn't been officially cleared for tenants and has been tied up in court cases for two years, leaving this finished flat legally uninhabitable.

With no other choice, Shaurya takes the deal, hands over his money and quickly moves what little he owns into the flat on the 35th floor in preparation to sweep his lovely Noorie off her feet as he carries her over the threshhold of their new life together. As he is running out the door to stop her from getting on the train that would lead her to her new husband, he forgets something, darts back inside, and the door shuts. With the keys in the lock. On the outside. He is trapped.

Over the course of the next hour and twenty minutes or so we watch as Shaurya tries to first escape, and then merely stay alive in this flat. The dubious nature of the building means that no one else lives there, so there are no neighbors to hear his screams. There is no running water, no electricity, and no food. At first he spends all of his time trying to get himself rescued, shouting from the windows, throwing messages out into the wind in the hopes that someone hundreds of feet below will answer his call. However, when that tact doesn't work, he is reduced to simply finding ways to stay alive, and these are the tests that turn the film into something more than just a one-handed survival thriller.

Trapped is a film about the terrors of urban isolation, how a man standing in the 35th floor flat in the middle of a city of twenty-five million can be completely alone. Shaurya has no one to rely on for help apart from himself, it's a theme that is driven home on numerous occasions through the film. When he exhausts his attempts to contact the outside world, he is forced to look inside to find out who he really is, whether or not he survives this event is entirely up to him, and it forces his to confront not only his own fears, but also to reconsider everything about himself.

Without giving away too much, Trapped is a film about the way that kind of isolation is entirely a matter of mindset rather than simply circumstances. Yes, Shaurya is trapped in this flat, but he learns more about himself and what his life really means to him in that time frame alone than he does working his day to day job on the outside.

Rajkummar Rao obviously has to do a lot of heavy lifting as he is the only onscreen character for a good three quarters of the film, and I can't imagine a whole lot of other actors who would manage that burden quite this well. His performance moves from bashful to bombastic over the course of the film, and unlike Tom Hanks' solid performance in Castaway, Rao's performance is almost entirely silent. There are no imaginary compatriots to keep him company, he is determines to keep his wits about him, and in fact when he does briefly split off into a delirious state, he's quick to regain his faculties and continue the job at hand.

Rao's performance and Motwane's direction, which largely leaves the actor space to do what he thinks is right, combine in this film to create somthing special. There are moments here and there that the film gets a bit liberal with the nuttiness of its premise, and I do wonder if the character's steadfastness might've been a bit overexaggerated, but that's the character the film needs, and it's a great performance from Rao.

Trapped is one of the best Indian films of the year so far, and it defintely wrings more from its premise than I would've expected. Thanks to the bravado performance of Rajkummar Rao, the film exceeds what I would've thought possible with what sounds like a silly and unrealistic premise. However, the writing and direction make everything seem very plausible and very quickly dispel any doubts as to the plausiblity or the situation.