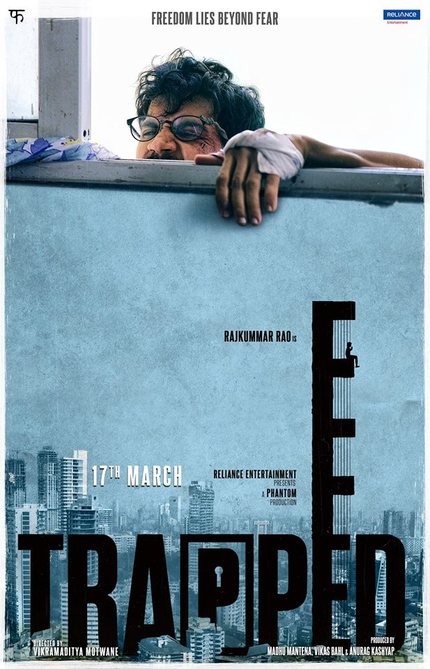 Mumbai is a city of around 25 million people, so it's hard to imagine a person ever being truly alone. However, in director Vikramaditya Motwane's (Lootera) new film Trapped, that's exactly the situation that Rajkummar Rao (Shahid, Aligarh, Kai Po Che) finds himself in after making a simple but tragic miscalculation, which leaves him locked inside his apartment at the top of one of the city's many high-rise apartment blocks.

I was fortunate to see a first cut of this teaser last summer when I was in Mumbai and was more or less sworn to secrecy regarding what I'd seen. I'm glad I can finally share what looks like a terrifying urban version of Castaway with our Screen Anarchy readers. I even tried to program the film for a couple of film festivals, but it didn't quite work out. As of right now I still haven't seen it, but every additional second of footage that appears gets me more excited.

Trapped's star, Rajkummar Rao, is one of the most capable and energetic up-and-coming stars in Bollywood. He's a frequent collaborator with one of India's finest directors, Hansal Mehta, with whom he's made Shahid, the devastating Aligarh, and the upcoming Omerta. It's always nerve wracking to leave the success of a film in the hands of a single performer, but Rao is one of the few in India in whom I have great faith to carry it off well.

Motwane is probably best known as one of the producers behind the artist-run production house Phantom Films, alongside Anurag Kashyap, Vikas Bahl, and Madhu Mantena, however, he has a history of critical success behind the camera as a director with 2010's Udaan and 2013's Lootera. Trapped looks like a bit of a turn away from those two films in terms of theme and content, but Motwane is a director who is known to be able to coax the best performances possible from his actors, and he has a lot to work with in Rajkummar Rao.

Trapped had its world premiere at the JioMAMI Mumbai International Film Festival last October and is scheduled for worldwide release on March 17. Check out the trailer below and let us know what you think.