70s Rewind: ZARDOZ, Much More Than Sean Connery Running Around in a Loincloth 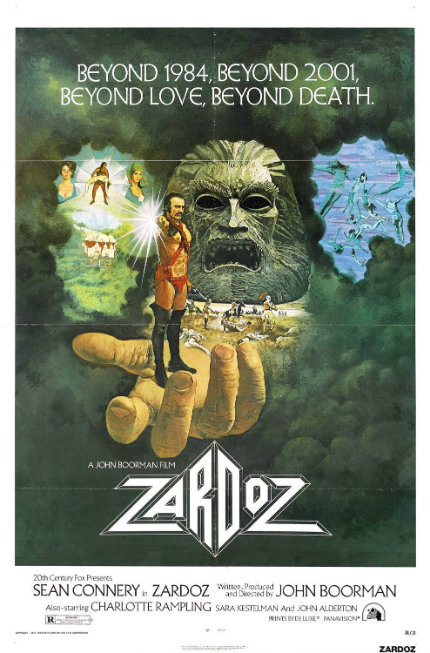 James Bond running around in a loincloth.

That may be the singular image that comes to mind when Zardoz is mentioned. If another image pops, it's likely "giant statue of a head flying through the air." Out of context, the images are simultaneously silly and striking, and even more so in the context of the era in which they were born.

In early 1974, newspaper and television advertising imprinted those images on my mind, though, underage as I was, I wasn't sufficiently daring to sneak out and see the R-rated movie for myself. In the 43 years that have passed, I saw it once or twice on television, but a recent viewing of Twilight Time's Blu-ray release made me wonder, initially: 'What on earth was John Boorman thinking (or smoking or whatever)?'

Writer / director / producer Boorman, just past 40 years of age, had just come off the white-knuckle intensity of Deliverance, which dominated the box office in the summer of 1972. To top that off, it earned Boorman Academy Award nominations for Best Picture and Best Director.

Three years before that, Boorman had been interested in making a movie inspired by King Arthur, but instead was offered a chance by United Artists to adapt The Lord of the Rings for the big screen. By the time he'd completed a script, United Artists no longer had the money for it. (Eventually, he made the quite wonderful Excalibur.) Yet the idea of other worlds evidently continued to intrigue him.

As he notes in an audio commentary available on the Blu-ray (originally recorded for the 2001 DVD release), he wanted to explore a lot of ideas, probably more than was wise for one film, especially on a tight budget. The budget restrictions didn't keep Zardoz from looking absolutely splendid, thanks to ace cinematographer Geoffrey Unsworth (2001: A Space Odyssey, Cabaret), and gorgeous locations in Ireland, all situated within 10 miles of Boorman's home.

Those ideas encompass a broad spectrum of philosophy and religion. Set in 2293, Zardoz imagines a world where a small group of people, known as the Eternals, enjoy the comforts of immortality in a land called the Vortex, which is protected by an invisible shield. 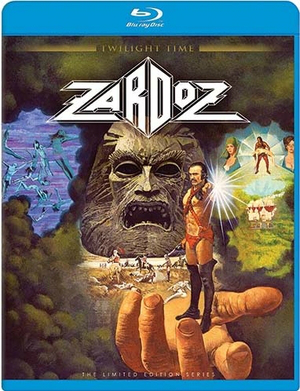 One day, Zed (Sean Connery) disturbs their tranquility. Discovered by May (Sara Kestelman), he is brought before the other Eternals on the same day that an Eternal named Arthur Frayn (Niall Buggy) has, apparently, died. (It's OK, as all Eternals can be rebuilt and brought back to life.) May argues that she be allowed to conduct experiments on Zed, while other Eternals, led by the contentious Consuella (Charlotte Rampling) argue that he be put to death at once.

Zed is allowed to live, temporarily, and as May conducts her experiments, Zed learns about life in the Vortex. He is an Exterminator, part of a group of people called the Brutals who live in the Outlands. Exterminators kill Brutals who are considered 'undesirable' and Zed rapes the women he likes before killing them.

In other words, Zed is not an exemplary hero, and Zardoz is not an ordinary science-fiction picture. As pointed out by one of the film experts in another audio commentary on the disc, science fiction on screen in the early 70s was far different than what we have today, when space battles and superheroes dominate the sphere.

New wave writers in the 1960s endeavored to kick out the pulp jams that had been embedded in science fiction since Hugh Gernsback's Amazing Stories Magazine, launched in 1926. The 1950s wave of sci-fi movies were largely drawn from this pulp magazine tradition, but Stanley Kubrick's 2001 definitely pointed toward new possibilities for creative expression, something that the director later explored with 1971's A Clockwork Orange.

Zardoz belongs more properly, though, to the 70s wave of philosophical science-fiction movies that included Douglas Trumbull's lovely Silent Running (1972). I've watched the more twice more in recent days, and it becomes more appealing with each viewing. It's the kind of movie I can easily imagine (pleasantly) arguing about, because the ideas are ripe for further discussion and exploration.

Sean Connery, by the way, was not Boorman's first choice for the lead role. The director had wanted to reteam with Burt Reynolds after their good experience making Deliverance, but Reynolds was ill and couldn't do it. Richard Harris was also considered by Boorman, but that didn't work out, either, reportedly because Harris was too inebriated to make their planned meeting!

Instead, Connery was willing to do the role, in part because of the difficulty of finding good lead roles after becoming so well-known as James Bond. Watching the movie now, it's difficult to imagine anyone else as Zed; as Boorman points out, Connery always plays himself, in a sense -- it's what made him a movie star -- yet he also becomes convincing as the brutal, questing Zed, who proves to be more than he appears at first blush.

Released in New York and Los Angeles on February 6, 1974, Zardoz faced tough box office competition. The Exorcist was still the #1 attraction. Mel Brooks' Blazing Saddles, released the same weekend, soon rose to the top of the charts and dominated February and March. (It would prove to the top box office draw of 1974.) Mixed critical reviews did not help. Still, since the film was modestly budgeted, it does not appear that it was as big a bomb as some might believe.

Boorman moved on to Exorcist II: The Heretic, another box office disappointment, and then a trio of well-received movies: Excalibur, The Emerald Forest and Hope and Glory and is still active. As for Connery, he costarred in Sidney Lumet's ensemble mystery Murder on the Orient Express later in 1974 and starred in two of my favorite movies in 1975: The Wind and the Lion and The Man Who Would Be King. His last appearance came in 2003's The League of Extraordinary Gentlemen.

Zardoz is definitely a weird experience, but it's the kind of weird that left me wanting more.

70s Rewind is a biweekly column allowing the writer to indulge his love for his favorite decade in film.

Do you feel this content is inappropriate or infringes upon your rights? Click here to report it, or see our DMCA policy.
70s RewindCharlotte RamplingJohn BoormanNiall BuggySara KestelmanSean Connery

I love this movie so much!

Boorman is a director I have loved since I first saw Emerald Forest as a child. My father was a huge Boorman fan and our vhs copy of Excalibur was playing often. I didn't see Zardoz until much later in life. For all its flaws you have to respect the cinematography. There's a shot of Zed jumping down a river bank that has always stuck with me.

I had only seen this film once, decades ago in college, and I remember it being quirky if a little boring. Having revisited the Twilight Time release recently, expecting to be at most bemused, I was surprised at how enjoyable I found it. You've now inspired me to listen to the commentary track for additional insight. Thank you.

You're quite welcome! Yes, watching it again, and then again with John Boorman's commentary really helped me appreciate what I was watching. Then I watched it yet again with the audio commentary w/3 film historians, which rounded it out for me. It really is quite enjoyable; in my case, I had to reset my expectations and appreciate it more from the philosophical and speculative viewpoints.

You mean the one of Zed tumbling down! Reportedly, that was really Sean Connery doing his own stunt! Remarkable. I'd seen a cut version of DELIVERANCE on television, but seeing EXCALIBUR (on a double-bill with THE HOWLING in 1981 in a dollar theater!) really opened my eyes. Watching ZARDOZ has reminded me of all his work that I haven't seen yet.

What surprises me is how much it's grown on me over the just the past week! I only watched it twice more so I could hear the audio commentaries before completing this article, and I realized what I was actually missing out on.

Zardoz is back in theaters, BABY!