As usual for filmmaker Francois Ozon, FRANTZ is a seductive concoction. 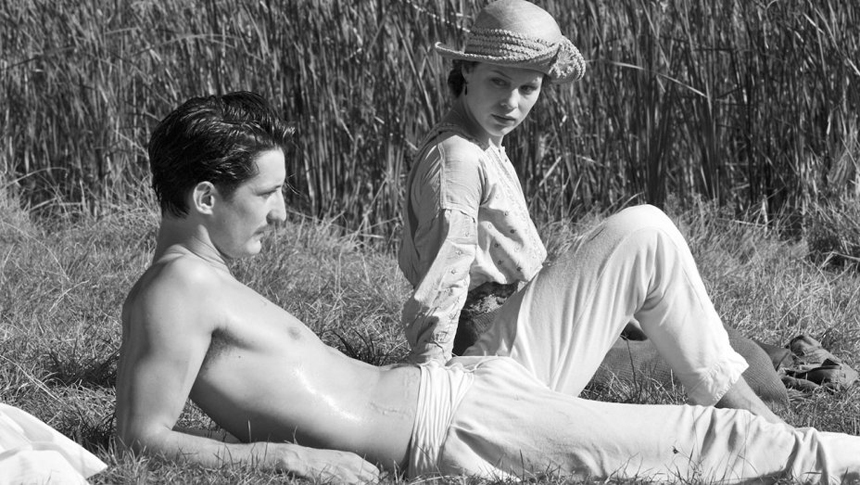 The year is 1918. The Great War has just ended and Germany and France were licking their wounds, hopped up on their respective nationalistic fervor. Anna (Paula Beer), a young German woman who lost her 23-year old fiancé, Frantz in the trenches, is living in a mountainous rural German town with his parents, the Hoffmeisters, out of love and duty. One day she notices a frail looking stranger putting roses on Frantz's grave.

Soon the stranger knocks on the doorstep. His name is Rivoire (Pierre Niney), a French soldier who claims to be a friend of Frantz from their school days in Paris. At first apprehensive with anti-France sentiments around the country - 'any Frenchman could have killed my son', but the Hoffmeisters soon open their arms to the charming, tall and melancholic man. Young Anna too, ignoring other suitors, gets smitten by the long eye-lashed, sexy mustachioed Frenchman.

Rivoire confesses to Anna that it was he, who killed her Frantz and learned about Anna and the Hoffmeisters through a letter in the dead man's pocket- that he lied to them. His intention of coming to Germany was to ask for forgiveness. Heartbroken, Anna takes ill right after Rivoire leaves and doesn't have the hearts to tell the Hoffmeisters the truth.

Ok. The synopsis for the first half of the film sounds very much like an old overblown melodrama. It's based on an old French play, The Man I Killed by Maurice Rostand, which was adapted by Ernst Lubitch in 1932 as Broken Lullaby. But Ozon, the master of a twisty narrative, packs much more interesting development in store in the second half- part detective story, part romance and part reflecting the current climate of the rise of nationalism where the relationship between two old neighbors - France and Germany and Europe as a whole is being tested.

Frantz is as usual for Ozon, a seductive concoction. Disguised as period costumes and sumptuous monochrome cinematography that bursts in to color in pivotal moments, but the film holds some sinister undertones of lost innocence and pain/joy of growing up.

Beer, a young German actress is marvelous here to carry the whole movie on her shoulder. It's perfectly natural to see the film from a female perspective in Ozon's films, and obviously he flirts with sexual attraction and sensuality (albeit very subtly). But Anna being a German lost in unforgiving world of its enemy gives another layer to this delicious concoction.

As a provincial country girl discovering the world in Paris, a bustling, decadent culture capital of the world, heartbroken but wiser and more world weary, Anna is a thoroughly a modern woman. As the last shot suggests that now she is accustomed to the city living, comfortable in her cosmopolitan surroundings. We feel for Anna. But we all know that wouldn’t last long, as we are aware of the world history of what comes next to France and Germany and she doesn’t.

Beautifully nuanced and poignant and still encompassing all the Ozon film characteristics – secrets, sexuality, twisty genre conventions and its searing political undertones, Frantz is Ozon’s most accomplished film to date.

Frantz is scheduled to open in New York on Wednesday, March 15 at Film Forum and Lincoln Plaza Cinema, followed by a national roll out.