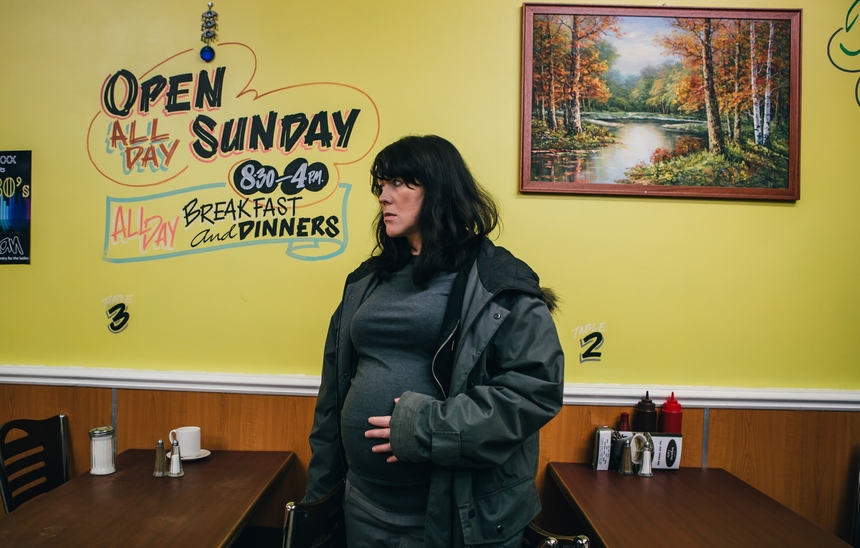 Following a U.S. premiere screening at SXSW this month, Alice Lowe's Prevenge (review) was praised as a chilling slasher with a pitch-black comedic bent. It was written and directed by Lowe who also starred in the film while pregnant with her first child.

Following the screening, I had the opportunity to speak to Lowe about where the idea for Prevenge came from, British realism, and people treating you nice when you're pregnant.

I had many other questions for Lowe but, unfortunately, our time was cut short when caring for her child took priority, as it should.

Prevenge is currentlyavailable to stream on Shudder or rent/purchase on iTunes.

ScreenAnarchy: Where did the idea for PREVENGE strike, and when did you realize it would be a good idea for a feature?

I was six months pregnant and a director friend came to me and said, "If you've got anything, I've got a company with a low budget financing deal and they like you and would you like to make something?" And I was like, "Well I can't, because I'm pregnant."

I was quite cross about it, because why is this happening now? Where have they been for the last ten years? So I went away having turned it down. Then I thought about it some more and realized I was a bit worried about being an unemployed freelancer with no maternity leave. So why don't I write a story for a pregnant character?

I realized it would have to be surprising and kind of out there and I landed on the idea that this character, instead of thinking about the future and sunshine and butterflies and babies, she was thinking about death and destruction and the things that had gone wrong in the past. A revenge narrative seemed like a good idea and as soon as I  coupled it with a pregnant woman, the character sprang to life in my mind.

I feel like there's a very broad, bad American version of this idea and it's interesting how nobody does realism quite like the British.  I don't think Mike Leigh would ever conceive of a slasher film with a pregnant killer at the centre and yet there is a clear aesthetic lineage. What was your inspiration for the aesthetic for the film and why do you think the British and to approach stories this way?

I come from a character-driven comedy background and so the things that make me laugh are nuances and socially satirical ticks that people have and their little pretensions. I did grow up watching Mike Leigh presenting these beautifully horrific characters so I do enjoy that and I enjoy realism.

I think what makes the film hang together for me is: I'm trying to lull you into thinking you're actually in someone's living room. And you're actually becoming implicated in the crazy events that are happening in a seemingly real world.  I wasn't trying to draw on film cliches, but rather try to create a world that feels real and then tear that apart slightly.

Do English audiences embrace this kind of cinema that turns a mirror to the culture?

I don't know. It's really hard to say.  One one hand, films like Notting Hill or Paddington, which I'm in, Paddington, are sort of fantasy representations of England and yet we quite like them. Even though we know the reality is that you've got graffiti all over the side of your council house and that's actually where you live and not some white, wedding cake house that costs millions of pounds.

But every now and then there will be a really good British film that everyone gets behind, like Trainspotting, that just taps into something. But I don't know overall. You'd have to ask  the money people about that .[Laughs.]

When my wife was pregnant I know everyone was opening doors for her and wouldn't let her get up to do anything, what was the sense like on the set when you were making the film with everybody and they knew you were pregnant? Was it business as usual, or were people sensitive to it?

Well, at first, you don't tell anyone, because you're trying to hide it or you'll lose work. So you're really wearing  your fat clothes and all of that stuff. In terms of people being nice to me, that was something that really surprised me when I first started showing.

I was like, "I could be a horrible person and people would still be really nice to me." And some part of that makes you go, "Why aren't you this nice to me all the time? Why can't we all be nicer to each other?" Which is actually an element of the film: everyone was someone's baby once, so why don't we treat them as nicely as we treat babies?

On the other hand, I did find it quite weird that you do kind of get this special attention. In other ways you're kind of invisible - ,just this  pregnant woman, who cares? - but in other ways, you are getting special treatment.

The whole thing is strange. I mean, I didn't do anything special, just got it up the duff. [Laughs.] I don't deserve a medal just because of that!