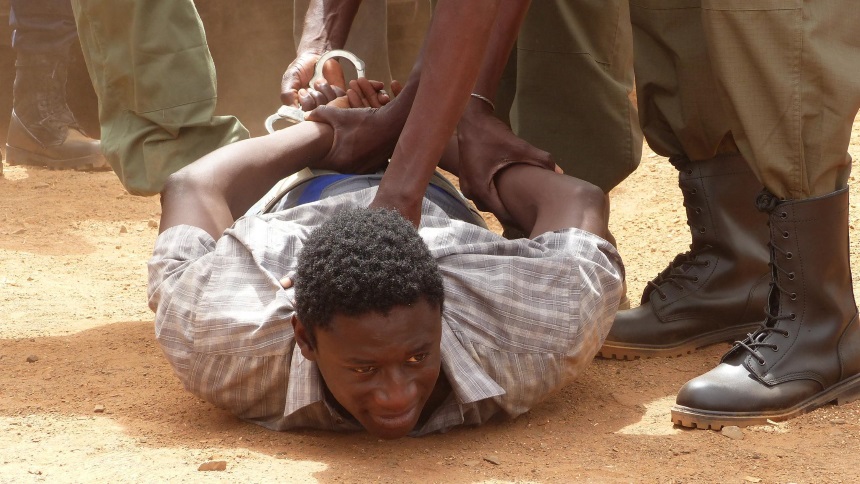 In Malinese director Daouda Coulibaly's crime drama Wùlu, we follow the rise of Ladji, a bus driver in Mali's capital city Bamako, who decides to use his street-savvy for becoming a career criminal. Cheated out of a years-in-the-making promotion because his boss' nephew wants the job, Ladji quits in anger. He needs money for himself and his sister though, especially since she has taken up prostitution to support them both, a situation Ladji is determined to stop as quickly as possible. He decides to call in a few favors from an old acquaintance who has turned smuggler.

Drug smuggling is a booming business in poor Mali. For even though there isn't much of a local market, the cartels in South America have discovered that North Africa offers many alternative (and more secure) routes to ship their produce to the rich Europe.
So Ladji becomes one of many traffickers, moving marijuana one way, cocaine the other way.

On his first smuggling mission Ladji manages to avoid an elaborate trap, and this gets him noticed immediately by the bigger players. Gaining a reputation for being intelligent, diligent and careful, Ladji quickly gets assigned to more difficult shipments, which are far more lucrative but also a lot more dangerous. For the stakeholders in North Africa do not just include other criminals, but also corrupt border patrols and even extremist Al Qaeda armies...

Wùlu is Daouda Coulibaly's debut feature film, shot on a meager budget under difficult circumstances, as Mali suffered a coup d'etat and the debilitating side effects of its vast drug industry. For while it seems great to have money flowing into the country in large volumes, having nearly all of it fall in the hands of criminal organizations is never a good situation.

What production problems were encountered never made it near the front-end of the cameras though. Wùlu looks great, and it is not as dour or violent as you might fear. Coulibaly aims for drama rather than gunning for an action-thriller, and instead of featuring cackling sociopath maniacs toting machine guns, all parties are shown as thoughtful businessmen with different interests. Wits and planning tend to trump weaponry in this film. Mind, the narrative does not shy away from violence, or evil for that matter, but at least people are shown as people, not cardboard cut-outs with bullseyes painted on them.

Wùlu means "dog", but in parts of Mali it is also a term for the stage of adulthood in which you realize what your place in society is. Ladji manages to achieve wealth and status, but the respect he gets is of a kind he'll never be truly happy with. It makes the film a less glamorous, more thoughtful version of the Scarface story.

The International Film Festival Rotterdam showed Wùlu, and even featured an advance premiere of it back in December. I missed it at that time, but as in previous years the advance premieres were Hou Hsiao-Hsien's great The Assassin and David Oelhoffen's excellent Far From Men, I really ought to have known better.

Audiences in Rotterdam rewarded the film with a rating of 4.1 out of 5, a decent average for a very decent and accomplished drama. Daouda Coulibaly can be proud, and Wùlu comes much recommended.