Rotterdam 2017 Review: THE WEDDING RING Allows A Beautiful Peek At A Different Culture 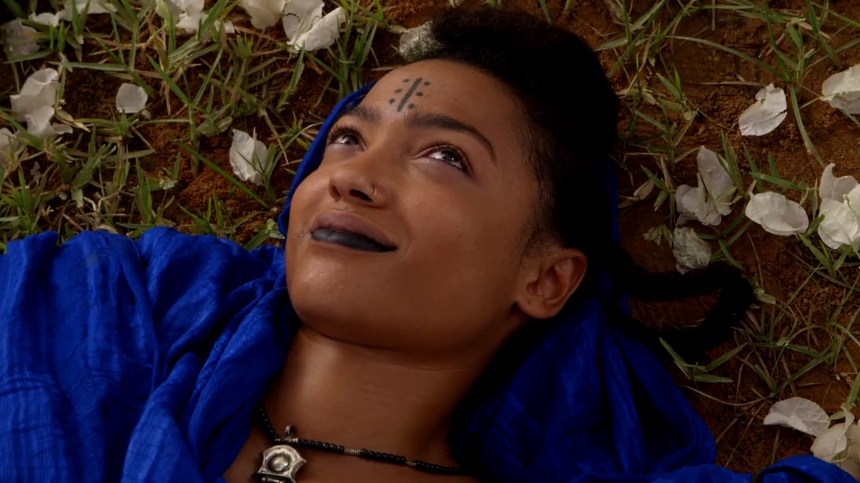 When we in the West think of the North African Sahel region, we tend to conjure up images of deserts, terrorism, war, famine, nauseating abuse of human rights... In short, the harshest environments and the nastiest works us humans are capable of. Less often do we get exposed to images of loveliness, of fairytales, colors, courtesy, grace and elegance.

Yet it's primarily this second set of characteristics which Rahmatou Keïta's shows us in her drama Zin'naariya!, which has The Wedding Ring as its official international title. While her film doesn't shy away from reality, it focuses on a gentle story about love, tradition and fear, and shows the often stunning beauty of the villages in the south of the Republic of Niger.

Magaajyia (Sarah) Silberfeld plays Tiyaa, a beautiful princess from the Songhay region who studies in France. When she returns home to her family, they notice she is somber and downcast. A local wise man says it's love weighing Tiyaa down, and that she aches for a prince she met in Paris. He also states that if Tiyaa will agree to a mystical ritual involving a European-style wedding ring, everything will turn out right...
Tiyaa is initially reluctant to comply, but her friends convince her to participate, saying there is no harm in trying. As they all prepare for the ritual, Tiyaa gets reacquainted with the life in her village, including the customs and taboos.

Will her prince appear to claim her? Has her life in Europe estranged her from her family and friends? Director Keïta never seems to aim for tension in her film, choosing rather to focus on the background of life in the village. We see people practice faith, both of the Muslim and the more local kind. We see the segregation of the sexes, and the different kinds of power both men and women wield. We see a culture which values courtesy above all, and which is very strict against abuse. A community where arguments are solved in a structured way, with witnesses present at every meeting to avoid misunderstandings and violence.

It looks almost too idyllic at times, until you remember that these are the rich aristocrats of the region, and what we're seeing here is a Jane Austen kind of romance story among the nobility. At no point does Rahmatou Keïta condemn either the Western culture or the Sahel way of living, but she does show the differences. And she definitely plays with the preconceptions we have about both, making each mini-story in the village end on a different note than the one you'd expect.

In the end, watching the film feels like taking a small holiday, and seeing new sights. Audiences in Rotterdam rated The Wedding Ring a 4.0 out of 5, a just reward for such a colourful and refreshingly benevolent experience.