Blu-ray Review: WOMEN ON THE VERGE OF A NERVOUS BREAKDOWN and My Life with Pedro Almodóvar 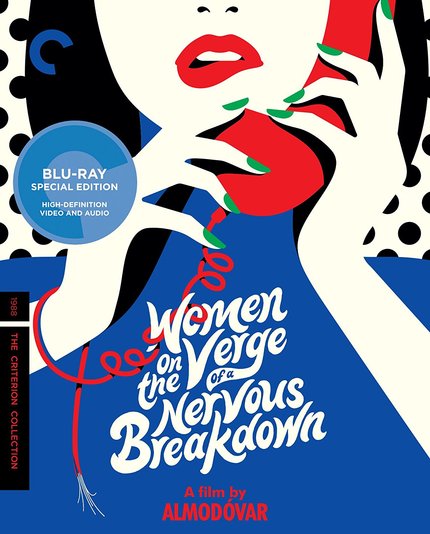 I was introduced to the films of Pedro Almodóvar when I was about twelve years old almost entirely by accident.

I don't remember the year exactly, though 1992 seems like a good guess based on the other memories that have attached themselves to my discovery of the melodramatic comedies of Almodóvar. At the time there seemed to be a wealth of Latin American and Spanish language films making waves internationally, and my father was like a pig in slop trying to keep up with the new arrivals at the video store. Among the piles were titles like Nicolás Echevarría's Cabeza de Vaca and Alfonso Arau's Like Water for Chocolate, but nothing quite stoked my interest like the arresting - pun intended - cover of a film called Tie Me Up! Tie Me Down!

I never watched these films with Dad back in those days, it was most likely a combination of the fact that most were completely inappropriate for a kid my age, and the fact that I wasn't quite a fan of films with subtitles at the time. However, there was something about that cover that drew me in. After Dad went to sleep, I put it into the VCR and I was scarred for life, but in the best possible way.

The images flashing across the screen of Antonio Banderas and Victoria Abril embroiled in a chaotic amour fou were burned a brand upon my psyche that I still feel today. Forget the fact that there was plenty of the usual T & A that a growing boy desires, the images, the humor, and the mountains of dense subtext did something to me that day that has yet to be undone. Of course, I didn't understand most of the material in the film, and I fell prey to the more salacious bits as adolescent boys are wont to do, but I could tell that there was something important about this film, and I needed more.

As I grew older and more of Almodóvar's work became available, I dove into the films headfirst still not completely understanding why I was so drawn to them, but inevitably pulled into his world of candy-colored melodrama and distinctly feminine comedy and sentimentalism. After years of watching these tapes my Dad rented, Kika, The Flower of my Secret, High Heels, Law of Desire, Almodóvar was as much a part of my understanding of what films were as he was about my understanding of who women are.

Pedro Almodóvar made me a romantic in his own fucked up way. As one of the greatest writers of female characters the movie industry has ever seen, he gave me the ability to feel a kind of empathy that I don't think I'd have otherwise known. In Almodóvar's films women are strong, women are frail, women have the power to control, women are destined to be controlled, they are funny, they are fearsome, and they are uniquely humane. Pedro Almodóvar taught me that women are people, they are everything, and at the same time, they are no more or less special than anyone else.

I think that lesson was the most powerful of all. Rather than writing women as foils to lecherous men, Almodóvar placed them at the top of his pyramid of power. They have harnessed the power of their emotions while maintaining their dignity - in most cases - and utilize empathy as the wonderful equalizer it is. One of his most striking and succinct examples of this ability is in his 1987 masterpiece Women on the Verge of a Nervous Breakdown.

Even though I'd been watching Almodóvar's films since I was far too young to understand, it wasn't until Sony Classics re-released them into cinemas in 2006 that I first saw Women on the Verge, and suddenly everything made sense. The glorious outlandish color scheme, the fantastical world of a Madrid in which everything is perfect except the relationships between men and women, the archetypal characters coming together to represent the many faces of women everywhere, it had been there in all of his other films all the time, but it really started here.

Almodóvar's stamp is everywhere, his wonderful eye of artifice and art in the eeryday, his ability to stage melodrama and comedy within the same frame, his unique worldview gets its first real workout in Women on the Verge of a Nervous Breakdown. His thematic obsessions with telephones and missed/mixed messages, philandering men, enabling women, violent revenge, and ultimately the ability to let it all go all make appearances in what is probably still the quintessential Almodóvar work.

The story is a convoluted mixture of revenge, tragedy, comedy, and women looking for their own centers in a world dominated by the lies of one man. In some of his films it takes more than one man, and in some of his films the only way to escape is to abandon men altogether, but in Women on the Verge, the name at the top of everyone's hit-list is Ivan (Fernando Guillen). It's up to the miraculous Pepa (Carmen Maura in a career defining performance) to keep it altogether, wrangling her friends and ersatz family together to protect them against a world torn asunder.

Women on the Verge of a Nervous Breakdown is as close as I'll ever see to a perfect film. It is Almodóvar to a tee, and its influence on me through the films that followed in its wake, is immeasurable.

Women on the Verge of a Nervous Breakdown appears on this new Criterion Blu-ray in a ravishing new 2K restoration supervised by the director and his brother/producer Agustin. The image is breathtaking, taking full advantage of the high definition format in a way that few films can. I watch a lot of discs from this era, and this is among the very best in terms of its ability to recreate Almodóvar's color palette and attention to fine detail. Every frame is sharper than the last, and Almodóvar's unique and crucial framing of every image is picture perfect. An outstanding achievement. The audio, so important in this take of a pair of voice actors at odds with one another, is also crisp and clear with no audible distortions or hissing. Perfect.

Criterion have provided a quartet of exceptional interviews with the film that do an amazing job of placing the film in context as well as illuminating the life and career of Almodóvar. The first is with the director himself, and it is absolutely sublime. Almodóvar talks about the celebration of freedom from fascism that was the '80s and how that celebration translated into his film. He also talks about the layers upon layers of text and subtext in a way that will make you want to watch the film all over again. It's an exceptional interview with a filmmaker who is far more capable than most at talking about his particular art and making it interesting.

The remaining three interviews are also quite solid. Next is an interview with Agustin Almodóvar, Pedro's brother and biggest supporter. In the interview Agustin talks about what it's like to facilitate his brother's art and how out of step it puts him with the rest of the producing community. An interview with Women on the Verge star and iconic Spanish actress Carmen Maura explores her early years working with Almodóvar and the way they were able to communicate and understand one another intrinsically. She briefly addresses their 20 year hiatus and ultimate reunion for her amazing turn in 2006's Volver. The final interview is with film writer and former New York Film Festival programmer Richard Pena who discusses Almodóvar's work and the finding of Women on the Verge for his opening night film back in 1988 and the major international recognition that followed.

Rounding out the bonus content is an essay from Spanish film writer Elvira Lindo that further contextualizes this film and the rest of Almodóvar's early work in the context of a post-Franco Spain and just how important it was for a nation struggling to catch up with a series of cultural revolutions they'd missed.

This is an exceptional package for one of my favorite films and Criterion has done an amazing job. Women on the Verge of a Nervous Breakdown is an easy recommendation. Buy it now!

More about Women on the Verge of a Nervous Breakdown

Dammit J, this is the kind of review which ends up costing me money!

Great column. Thank you for it!