Directed by Tristan Ferland Milewski, the documentary behind the scenes of an exclusively all-gay cruise. 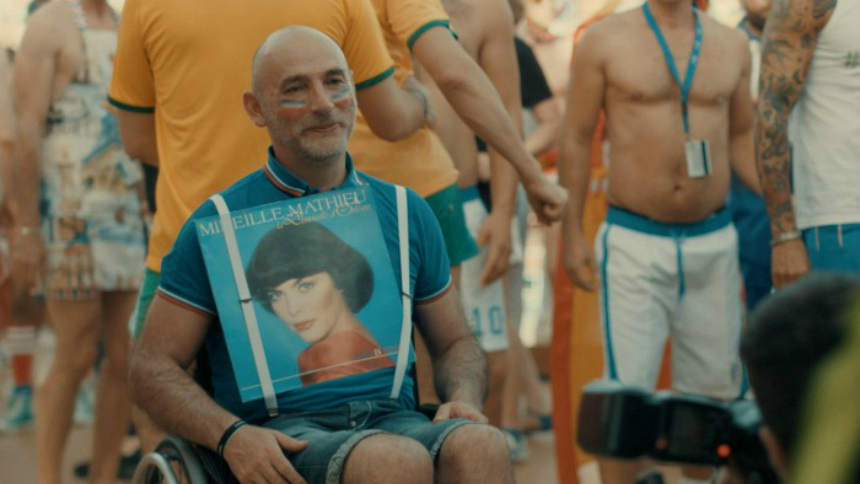 When you think of luxury cruises, you probably picture old couples and families setting off into the sunset - a sort of world tour that never has to forego the comforts of home. Well, Tristan Ferland Milewski's Dream Boat isn't that at all. Moored in the 67th Berlinale's Panorama Dokumente selection, this stylish documentary welcomes you behind the scenes of an exclusively all-gay cruise.

Going at full speed ahead, this testosterone-fuelled movie boldly takes the boys out to sea, and what we see there gives the word "cruising" a whole new meaning. The movie has a real glitzy, Instagram-esque cinematography full of rich filters, and what its protagonists say or do has a real "yolo" joie de vivre to it. But initially Dream Boat all seems rather harmless or pensive. It even draws us in with the innocuous sound of soft xylophone music, while a ship's maid neatly lays out a row of condoms on a cabin bed.

Every scene seems bathed in a golden South American light and everything looks decidedly quaint and dated. But what we are seeing is very much the calm before the storm. Soon an entire cast of strapping sailors descends on the boat, and they all begin settling into their new lodgings. We hone in on five very different men, who each tell us about themselves and what they hope to get from the cruise.

First you have Marek, a Polish migrant to the UK who is searching for a less skin-deep relationship. Then you have innocents like Dipankar, a 32-year-old Indian singleton who has moved to Dubai to work in finance and has never been in a relationship. And there's Palestinian refugee Ramzi, who's happily settled with his new Belgian boyfriend, and a German man called Martin who has learned to live with being HIV positive. The group is completed by Phillipe from France, who has had to adjust to life in a wheelchair after an attack of meningitis.

Before long this motley crew launches into an armada of parties. The first of which happens to be a flag party - essentially where you wear anything that represents your country as a sort of ice-breaker. Dipankar even rather amusingly explains what being gay in India means to him based on the way his buttocks are displayed in bright, tight, white thong. In these party scenes, Dream Boat well and truly sails into its second mode: the gyrating music video.

Rows of coquettish bodies line up, and biceps and abs dance and flex in front of the camera to thumping music. For all the world, what we see can only be described as the simplest of male courting rituals. And the flotsam of used condoms which these drag and fancy dress parties leave behind definitely makes perfectly clear how free the sex culture that partly propels these cruises is.

But Dream Boat is rarely ever confrontational or full frontal. Instead, the documentary's static gaze unashamedly captures its subjects in a variety of states of arousal, from a very lusty full mast to a more emotionally fragile half mast. During the process, each man very much experiences his own form of cabin fever, but rarely are these purely caused by his sexual impulses.

It becomes clear very early on in this documentary that Milewski has honed in on five particularly well-natured men. Individuals who would definitely be good role models to others. However, the diversity within this group also allows the director to discuss a great number of issues that speak both to gay and universal problems.

They are five well-versed travellers who are all able to openly discuss very personal topics, like how they perceive their own bodies or how they court certain types of masculinity. Likewise they talk about how they strive to make the most of life in the moment or struggle to envision a future that has the security they see in the relationships they see around them. It's also incredibly striking to see how much each of these individuals has had to relocate or bravely carve out a space for themselves to celebrate their own choices.

But Dream Boat's philosophical discussions are always rather amusing, given that the men are almost always about to head into something rather antithetical, like a black leather bondage rave, for example. There's also a series of wonderfully amusing reveals whereby the ship's elevators open to reveal a crowd of rowdy men all closely huddled together in a collection of funny matching costumes.

Also on a purely visual level, another thing that sticks out is a sense of how frighteningly predominant a certain muscle-bound body type is. Almost all the men in the film conform to it or aspire to achieve it, and some even smuggle protein powders and creatin shakes below deck with them. Nevertheless, there is a real mix of ages, cultures and body types, so it does almost feel like the many different faces of the gay community are all represented in Dream Boat.

Another thing that's really nice about this documentary is the impression you get that all the men participating in it have had their lives enriched somehow by this opportunity to reflect on how they feel and how far they have come. For that reason in particular, Dream Boat is a really uplifting and thought-provoking film that restores your faith in cinema. Let us hope that these men can cruise with pride for many years to come.

Do you feel this content is inappropriate or infringes upon your rights? Click here to report it, or see our DMCA policy.
Berlinale 2017documentaryGermanyTristan Ferland Milewski