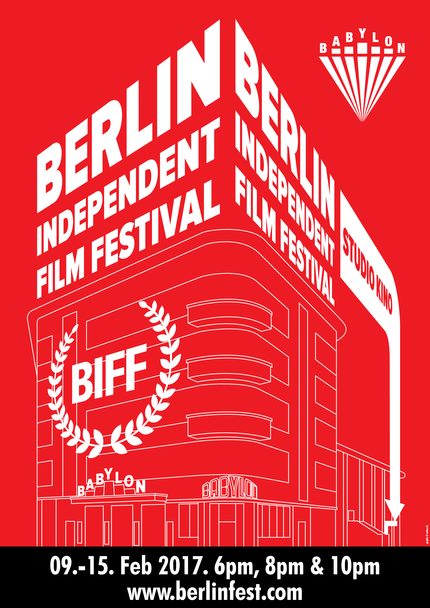 Another year, another BIFF. 2017's edition no. 8 afforded Director Jim Devaux & Deputy Director Claudine Biswas-MacKenzie the opportunity to exhibit boundary crossing short films, innovative feature presentations alongside music videos and courageous documentary filmmaking from around the globe. Berlin Independent Film Festival is an international filmmaking shindig which takes place annually at the Babylon. It has steadily grown into a respected screenwriting and filmmaking competition in central Berlin each February.

BIFF is above all a place to exhibit genre-busting work to an international audience, who flock to Berlin for the Berlinale and its European Film Market. The two film festivals remain entirely unconnected. English and German language films play in original versions, whereas foreign language films are subtitled. The popular short film blocks bring film fans in their droves, attracted by the eclecticism of this event. Awards are bestowed in many film & screenplay categories such as Best Feature (over $100k), Best Micro-Budget Feature (under $100k) & Best Female Director Feature.

Arthouse narrative drama in the fearlessly experimental vein was championed in the long-form categories of Best Feature Film with the Glaswegian 'Seat in Shadow' by Henry Coombes, and Hong Kong mystery 'Jasmine' by Dax Phelan. Both films demonstrate the endless versatility of the septième art form up against the constrictions of low-budget filmmaking. The short 'Krampus', a Bavarian 'Bad Santa' richly deserves its Best Short Film prize. On a more serious note, Canadian Lloyd Frost presented his music film on the dangers of free speech in Cuba, 'In Everyone's Eyes', and received the accolade of Best Music Video.

Like more and more producers in Berlin for the top-ranking EFM / Berlinale filmmaker networking events, Parisian exec producer, Gil Aglaure stopped by the Babylon in the historic centre of Mitte to present his movie at BIFF. 'Virtual Revolution' by G.-R. Duvert is a paean to the sci-fi genre and cost just over 3 mio. It was the worthy recipient of the coveted Best Sci-Fi / Horror Feature prize.

BIFF showcases hard-hitting documentaries which year after year have become the forte of this alternative festival. Showcasing the most uncompromising docs has become a staple of the Berlin Independent Film Festival. This year, 'The Uncertainty Has Settled' a film by experienced Dutch documentarist, Marijn Poels won Best Feature Doc at BIFF for his anti-dogmatic stance in raising questions on sustainability in the realm of environmentalism. Emerging from Down Under, crossover experimental documentary, 'The Drover's Boy' pays its respects to Australia's troubled national heritage thanks to Margaret McHugh's daring exploration of the documentary genre. It joins the 8th BIFF award winners with Best Documentary Short at this prestigious festival.

Prof. Ira Schneider presented his experimental short 'More or Less Related Events in Recent History' which contained rarities such as his footage of the ill-fated Altamont Free Concert of 1969. A BIFF habitué, the Berlin-based New Yorker is a veteran curator, artist and videographer and should be credited as being the founding father of video art, even before his more popular colleagues, Bill Viola and Nam June Paik tried their hand at it. He is a prolific filmmaker who espouses continuous formal experimentation on diverse film stock with rough and ready re-edits of old material, spliced with his own original footage featuring key events juxtaposed with dadaist material and shots of intellectual heavyweights from the past.

The anonymous jury is composed of carefully selected industry professionals from around the world. Low budget films may be submitted to the next edition of BIFF in a timely fashion. Once films have been submitted they are considered for inclusion in the next year's festival programme. Read the BIFF submission guidelines here: http://www.berlinfest.com/film-submission/