70s Rewind: COMES A HORSEMAN, James Caan and Jane Fonda in a Western 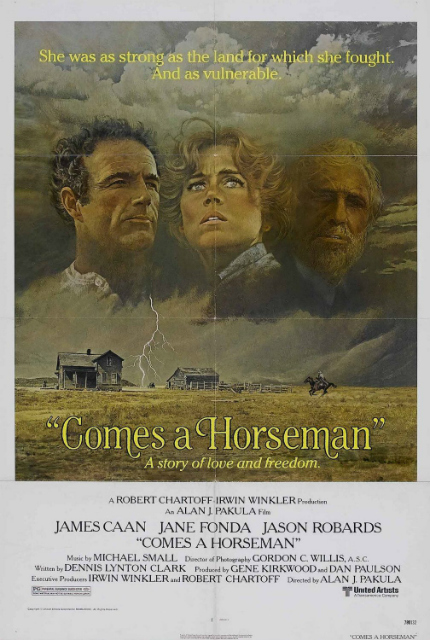 Who would follow up a tense, real-life political drama with a relaxed Western set in the 1940s?

Alan J. Pakula, that's who. Pakula directed All the President's Men, which was released in April 1976, in the thick of the Watergate scandal. The movie received eight Academy Award nominations and won four, including Jason Robards for best supporting actor and William Goldman for best adapted screenplay.

Released in October 1978, Comes a Horseman starred James Caan (?!), Jane Fonda and Jason Robards as ranchers in a gorgeous yet unidentified area of the western United States.

Circa 1945, Frank 'Butch' Athearn (Caan) and Billy Joe Meynert (Mark Harmon, in the first film role for the former U.S. football player), are military veterans who have bought a small cattle ranch. Before the day is done, they have been ambushed by strangers and Billy Joe is dead.

Butch is discovered by Dodger (Richard Farnsworth) and brought to safety on the large cattle ranch where he works with Ella Connors (Fonda). Ella sold the land to Butch and Billy Joe, but she is not willing to extend more than the minimum expected hospitality to the wounded Butch.

As the story unfolds, it becomes clear that Ella is the lone holdout in the valley from the ambitious clutches of cattle baron Jacob 'J.W.' Ewing (Robards), and they have history between them. J.W. thinks their relationship, some years in the past, is a good thing; Ella thinks of it as a disastrous, youthful mistake that quickly turned into tragedy because of J.W.'s evil maneuverings.

Eventually, the hard-edged Ella and the determined Butch team up, more out of a refusal to give up than anything else. If they work together and round up enough cattle, which have been scattered to the wild, they can then take them to market and survive another year without going bankrupt. That's the one thing J.W. does not want -- and he will do anything to keep his cattle empire under his complete control.

James Caan made such a forcible impression as Sonny Corleone that he seems an unlikely cowboy, until one remembers that he appeared in Howard Hawks' Western El Dorado (1967). Indeed, after his profile was raised in The Godfather, he tackled an admirably diverse range of roles, from an ex-con in the goofy comedy-drama Slither to a Navy man who falls for a prostitute in the romantic drama Cinderella Liberty to a compulsive professor in The Gambler to a cop in the anarchic comedy Freebie and the Bean to showman Billy Rose in Funny Lady to a futuristic athlete in Rollerball and on and on.

Caan underplays his role as Buck here. Buck rejected the idea of re-enlisting in the military and relishes the open air of cattle country. He surprises Ella with his skills; he is almost as laconic as she is, resistant to any open expression of emotions. Fonda looks weathered and that's also how she acts. She is tough and more than competent at ranch work. She trusts the aging Dodger, who is her father figure.

Farnsworth earned his first Academy Award nomination for his performance. His career as a stuntman and bit player dated back to the 1930s, but his well-deserved nomination gave him entree to larger acting roles in movies like The Grey Fox and more notable supporting work in movies such as Misery. He capped his career with a distinguished lead performance in David Lynch's The Straight Story, which earned him another Academy Award performance. 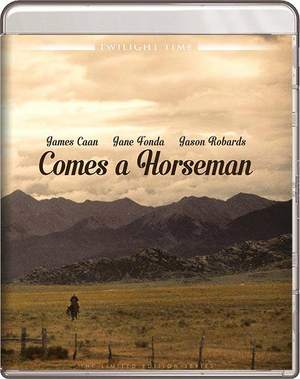 Watching the movie for the first time on the recently-released Twilight Time Blu-ray *, I was struck by Dennis Lynton Clark's original screenplay, which strikes a lovely balance between big ideas and delicate characterizations. Clark has few credits on IMDb, but if accurate, he began as a production / costume designer and art director; this was his first produced script. His next writing credits came in the 1990s, which suggests he either worked steadily in other fields or wrote scripts without any being produced.

As for Pakula, he began as a producer in the late 1950s before moving into the director's chair with The Sterile Cuckoo (1969). He directed Jane Fonda in her Academy Award-winning performance in Klute (1971). Before All the President's Men, he teamed with Warren Beatty for the on-target, extremely unnerving The Parallax View (1974). After Comes a Horseman, he made 10 more movies of variable quality and success, most notably (in my mind) Sophie's Choice before being killed in a most unusual traffic accident.

Cinematographer Gordon Willis had already worked with Pakula on Klute, The Parallax View and All the President's Men. His previous Western, Bad Company, gave the movie a darker edge, which fit the material. For Comes a Horseman, he varies the lighting to reflect the shifting moods. Initially, for example, Fonda's face looks angular, her eyes hooded; later, when she and Caan become romantic, the lighting is more complementary, which enhances the brighter shading that the actress is expressing. It's beautiful work by all involved.

Comes a Horseman resonates well for its thematic exploration of the strong and powerful, and how those in their shadow can fight back. It's not the most forceful movie, and it occasionally gives into stereotypes, especially in the finale, yet it also pushes against expectations. As a modest Western, it's quite satisfying.

* Twilight Time notes: "We recognize it has not survived in the greatest of shape. We hope that those of you who care enough to buy a copy will forgive the unusually high (for a TT release) level of 'speckling' (minus density) and general debris that mar the work of master cinematographer, Gordon Willis." Thus, the disk is offered at a reduced price.

My personal home video system is quite modest, comprised of a 32-inch HD television and a Blu-ray player, and I was not overly distracted, though the speckling and debris are noticeable.

70s Rewind is a column that focuses on the writer's favorite film decade.

Do you feel this content is inappropriate or infringes upon your rights? Click here to report it, or see our DMCA policy.
70s RewindAlan PakulaBlu-rayJames CaanJane FondaJason Robards