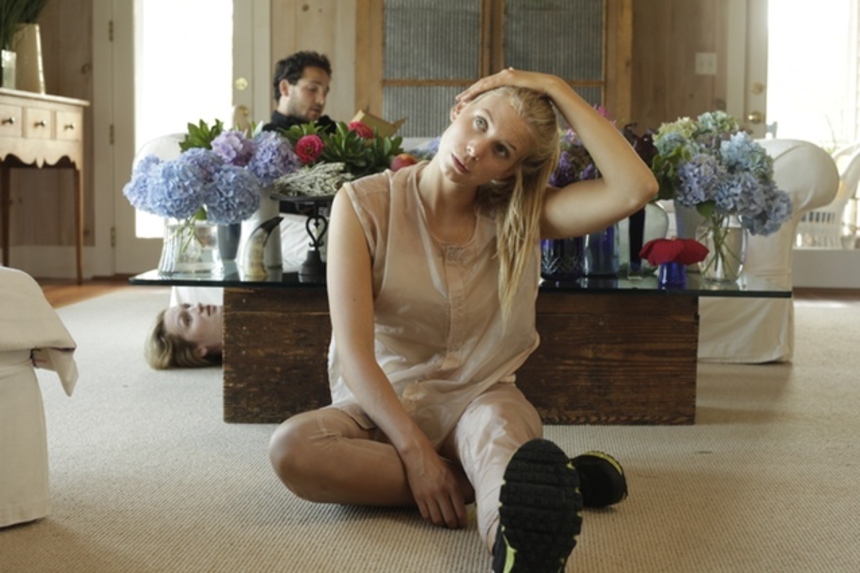 After his satire on the utopia of Gen Y, The Woods, Matthew Lessner returns with a new feature, Automatic at Sea, a psychedelic chamber piece with flair.

A boy meets a girl. The boy invites the girl to his family´s private island. He, Peter (David Henry Gerson), is a charismatic wealthy heir. She, Eve (Livia Hiselius), is a not so naive Swedish traveler. After witnessing these first couple of minutes, alarms may ring loudly in your mind to this scenario being a rom-com, or a coming-of-age story, or a mash-up of both. Lessner serves this as an hors d´oeuvre to a big fat red herring.

The duo land on the island, with the pretense that a party is going to explode once all the guests arrive. At least, it seems like it. Eve and Peter spend time together settling into the house. Eve wanders around the island. At this point, It is not certain what Peter does, although Eve has a hunch based on some awkward observations.

Eve, as the story´s (unreliable) narrator, opens her mind to viewers in deep-cut monologues and musings on her daily proceedings. The whole situation on the island becomes more obscure each passing day. Soon, the protagonist is caught in a downward spiral of doubts and delusions, a twist of events rendering innocent Eve a paranoiac and charming Peter a creep.

As the situation becomes stranger, Lessner returns the idyllic mode of rom-com into a psychological play of cat-and-mouse. As Eve turns ever more into a voyeur, inquiring about Peter´s activities Automatic at Sea morphs into a paranoid thriller. After Grace (Breeda Wool) materializes on the island, where we are unclear whether she is a real human or some sort of mind mirage, Eve´s sojourn shifts into an dreamy island take on The Cabinet of Dr. Caligari.

Lessner and his crew manage to shoot this psychedelic story without expressionist décors. We are given virgin island nature (shot on Martha´s Vineyard), a house, a tool shed and mysterious soda, with the film´s bag of tricks extends into the post-production. Reality-distorting editing, eerie slow zooms, manipulative image juxtaposition perched on the edge of the authentic world, feverish dreams and hallucinations threaten to shred Eve's perception.

Lessner´s oeuvre does not slide into a pit of genre clichés though. This is partly due to the film's employed irony where Eve, in her inner dialog, attempts to explain various strange occurrences (such as why the relationship with Peter is kept exclusively on a platonic level). The director yields an enigmatic aura over scenes and visions, which are equivocality the beating heart of the paranoid thriller. This is done not only through cryptic lines served in sermonic monologues but also with the appearance of opaque apparitions. Particularly memorable is a tree of naked women, a seeming reference to a nonexistent Goya painting... though less macabre. Images such as this leave viewers to decipher the film's symbolism... the tree of women doubles as an ominous omen as well as a sort of female empowerment archetype.

Lessner pushes the delusion to a crescendo, the mind-bending over-drive fully erupting in the third act and only occasionally toning down the pace as Eve´s mind attempts to process the bigger picture. Eventually, he delivers yet another hot twist carrying the final fragment of the jigsaw, thus offering a satisfying denouement which viewers can put together in hindsight as is the custom of puzzle films.

Automatic at Sea is a small albeit ambitious offering. Despite being a hallucinogenic descent to the point where subjective perspective divorces reality, the film eschews being frustrating, an offense usually committed by over motivated debutants. Lessner approaches the irreal plane of the film cautiously, never oversaturating the screen either in plot or inconsistencies. In the course of dealing with fabrications and phantasms injected into reality, the filmmaker manages to pay homage to fantastical French cinema.

Lessner accomplishes this hypnotic voyage through a mindscape that is wondering strictly philosophical questions such as “Am I really me?, Do I actually exist?, Can you ever really know anyone?”. Relieved of over-complication and baroque contemplation, Automatic at Sea proves to be smooth sailing on the tides of postmodern man´s anxiety. The film is ultimately less of a horror and more of a playful and hallucinogenic narrative speculation. The filmmaker successfully espouses complicated existential and cosmic questions in fun and intelligible forms without ever lowering his standards.

Do you feel this content is inappropriate or infringes upon your rights? Click here to report it, or see our DMCA policy.
automatic at seabreeda wooldavid henry gersonlivia hiseliusmatthew lessnerslamdance 2017