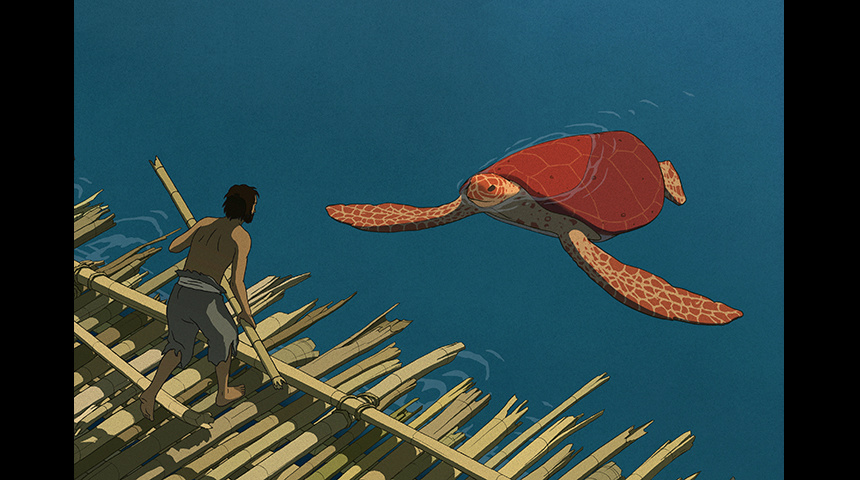 Human emotions can be fragile, unpredictable things. However, they can sometimes also be pretty damned predictable. Show someone a kitten and they'll feel an emotional pang. Show a human going through the stages of life from youth to life's logical conclusion and they're bound to well up with complicated emotions. Do that in an incredibly identifiable and beautiful way and they'll be left a messy puddle of emotions on the floor.

It might be time to get a mop for all those puddles, as just about anyone who watches Michael Dudok de Wit's Studio Ghibli co-production The Red Turtle is in for a seriously emotional experience. Through gorgeous visuals, a stirring score, and just the right amount of levity, this animated allegory of life's phases knows exactly what buttons to push to make the audience Feel with a capital F. It's a sublime examination of what makes us human and is a film that is not to be missed.

Told without traditional dialog, The Red Turtle's plot is mostly allegorical and works to frame the phases of life just enough to give us the connections to the character necessary to go on the emotional journey. It begins when a man is washed up on a deserted island. The man explores the island, finding both wonders and danger. He is fixated on leaving the island and builds a raft to escape. But a mysterious force smashes his raft and he is washed back onto the beach. After this happens a few more times, he discovers the force is an enormous red turtle. When the turtle arrives on shore, the man makes a decision that alters the course of his life dramatically.

Quite a bit can be written about the symbolism of each element of the man's life on the island. But what's most interesting is the way these symbolic elements add up to create the sense of connection to the character that ultimately causes the audience to feel so much emotion. Dudok de Wit seems to have tapped into some code of human emotions and can make us feel joy, sadness, and ultimately, intense melancholy at will.

Much of this is due to the score by Laurent Perez del Mar that plays excellently with the wonderful animation. That animation, led by Prima Linea Productions, Valérie Schermann, Christophe Jankovic, and Jean-Christophe Lie, has a lovely flat European feel to it. The characters are simple, with small dots for eyes, and vistas are expansive and gorgeous. Some of the best details come from the small animals like the millipedes and bats that are shown frequently.

Studio Ghibli co-produced the film with Takahata Isao and Suzuki Toshio serving as Artistic Producers. There is some similarity to Takahata's recent The Tale of Princess Kaguya, with the story's more abstract cues and use of negative space. The time-honored Ghibli tradition of having small animals play comic relief is here as well with the small sand crabs as the man on the island's main companion for the first part of the story.

While The Red Turtle is Dudok de Wit's feature debut, he has a wonderful background of animated shorts including the César-winning 1996 short The Monk and the Fish and the Oscar-winning 2001 short Father and Daughter. It will be fascinating to see if he turns to a feature with dialog as his next challenge. Considering The Red Turtle was a nine-year journey, there might be a bit of a wait. In the meantime, audiences will soon get to experience the masterpiece that is The Red Turtle over and over. Just one tip: don't forget to bring your tissues.

Review originally published during the Cannes Film Festival in May 2016. The film opens in New York and Los Angeles on Friday, January 20, before expanding across the U.S.

Do you feel this content is inappropriate or infringes upon your rights? Click here to report it, or see our DMCA policy.
animationBelgiumFranceIsao TakahataJapanMichael Dudok de WitStudio Ghibli