Lucas Till and Jane Levy star in MONSTER TRUCKS, a disposable if fun bit of nonsense for kids 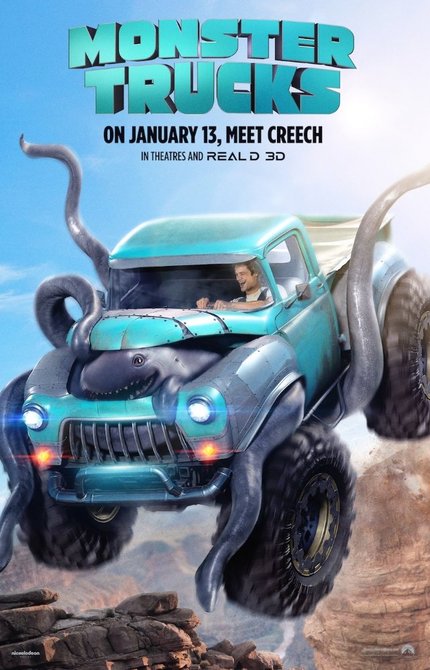 Of course, this being only the second week of January, it's also my only movie for 2017 so far.

But speaking of 4-year-old boys, I've heard tell that that's exactly who thought up the concept of this movie: a Paramount Studios exec's very young son. Monster Trucks = trucks with monsters in them! The trucks are shiny and loud with huge tires and they go fast and do cool stunts and the monsters are slimy and round and funny but with big sharp teeth that go "GRRR!!", and they're all good guys.

Not since Robert Rodriguez's kids thought up The Adventures of Shark Boy and Lava Girl while playing in the pool has such a major studio production germinated from the mind of a child.

The good news is that Monster Trucks is a far better film than Shark Boy and Lava Girl. It's hilariously preposterous if you think about it, and as loopy and cliched as all get out, but it's not poorly made and adheres to its own cockamamie premise without batting an eye. There are even a few fun truck chases, and at least one truly impressive stunt involving two trucks flipping front to back at the same time.

Lucas Till plays Tripp, a silent loner with a good heart and a penchant for the mechanical. After a nearby corporate deep-core drilling project goes awry thanks to chief baddie Rob Lowe, a family of blob-like subterranean creatures are released into our world. The youngest takes up hermit crab style in the hollowed trunk of Tripp's work-in-progress pickup truck, hiding from his tireless pursuers, all of whom are corporate flunkies, thugs and boneheads. When the time comes, with tentacles flailing from the wheel wells, it gets the truck going like nothing else.

Jane Levy is the smart girl love interest who's madly crushing on Tripp (his determined squints, flannel shirts, and wisp of hair just so across his face), and gets caught up in all of it. Before long, she's let her hair down and is getting her hands dirty, too.

With their youthful softness still intact, it's odd to learn that both leads, here playing chaste high schoolers, are well over 25 years old, and have already lived a lot of life. It's also odd to realize that this is the same Jane Levy who went violently ghoulish in Fede Alvarez 2013 intensely gory Evil Dead remake. Ah, acting! And also, it helps that this film was shot three years ago.

In between truck action, the film takes place almost entirely in greasy mechanic shops, junkyards, and old barns full of tools. No time for any kissy-face yuckiness when there's so much building that can be done. They've got imprisoned creatures to rescue, and then get them home. It's like E.T. meets The Fast and the Furious on an even more juvenile level.

Vroom! Off they go, ripping down the street, causing all manner of consequence free damage to other cars and private property. Eventually Tripp's "monster truck" is joined by two more similar custom jobs for a grand vehicular showdown across the non-existent hills, cliffs and streams of North Dakota.

Along the way to this point, they tear up the countryside pretty relentlessly, what with all the cool skidding and sliding and revving and jumping and landing. Also, they stop for an extremely pricey gas station break, since the creature eats oil. All of which seems to fly in the face of the film's reoccurring obligatory environmental "message", that disputing ecosystems is bad. But, I'm sure the studio (Nickelodeon) nonetheless still feels good for including it, and it completely smooths over everything else, yes? Yes??

I won't lie, personal expectations were very low for this one. Even my two boys (11 and 6) went in curious at best. But the 11-year-old was pleasantly surprised, and the 6-year-old... let's just say if there's a "little boy cinematic sweet spot", this movie nailed it. His eyes were like delighted saucers every time a truck went airborne. (I'm half surprised we didn't have to stop for Visine on the way home.) He may not remember it half a week later, but in the moment, this was his choice serving of empty mental calories. Parents may also care to know that there's little to nothing in the way of foul language, and not even a peck on the cheek in terms of the physical.

Director Chris Wedge, making his live action debut following several animated features from Blue Sky Studios, does an entirety fine job with this nonsense. Despite a rumored high budget, Monster Trucks looks and feels like something generated with young kids exclusively in mind. Subsequently, not only will it be right at home as an option on various streaming platforms, but it wouldn't be surprising to look up one day several years from now to see a Monster Trucks 2, 3, and 4 have joined the listed options. A boy can hope, anyway.

Do you feel this content is inappropriate or infringes upon your rights? Click here to report it, or see our DMCA policy.
Jane LevyLucas TillMonster Trucks