Review: Manos: The Hands of Fate, a B-movie for the ages 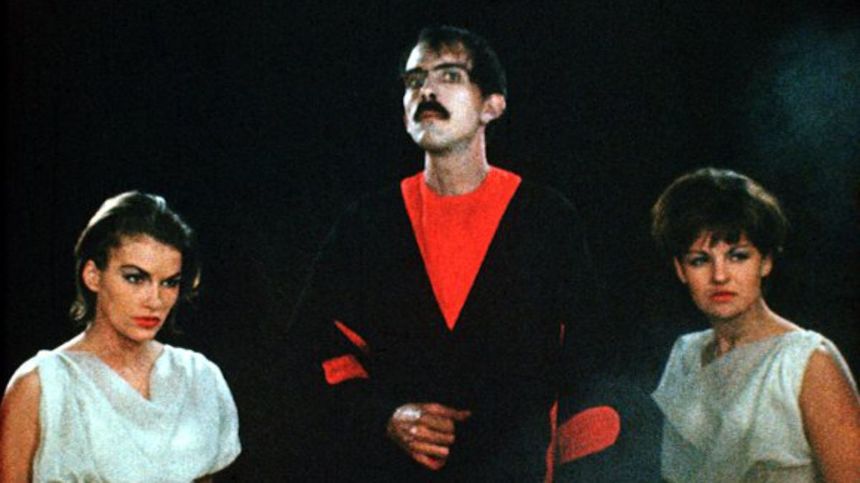 Manos: The Hands of Fate is a film I’ve been reading about for quite some time. Infamous for its ineptitude, it’s one of those “so bad it’s good” kind of movies that has achieved cult status due to its terrible acting, nonsensical plot, and technical errors. Shot in the 60s, it was written and directed by Harold P. Warren, an insurance salesman who, according to legend, made a bet with visiting location scout Stirling Silliphant that he could film a horror movie with an extremely limited budget.

And that he did.

What he didn’t do, however, was direct a particularly compelling or even scary motion picture. The stories about Manos are infamous, and could be considered more interesting than the film itself. It was shot without sound, and later dubbed by a group of three actors, none of whom were paid, at least not in cash; the editor finished his work in three, four hours by Ernie Smith and James A. Sullivan while intoxicated; and its premiere was such a disaster, that most of the cast and crew fled the theatre in embarrassment.

Despite its legendary status, though, it was only two years ago that fans of really bad B-movies finally had the chance to experience Manos in its purest form. The good folks at Synapse Films found new 16mm prints of the movie and painstakingly restored it to 2K resolution, cleaning up both picture and sound as to make a more… bearable movie? Not quite, but it’s the closest thing we have to experiencing Manos the same way that the pitchfork-and-torch-wielding angry mob did during the premiere more than fifty years ago.

Mike (writer-director Harold P. Warren) and Maggie (Diane Mahree) are on a road trip with their daughter and dog, when they take a wrong turn in rural Texas and become trapped in a weird lodge inhabited by an oddball pagan cult. Its leader is The Master (Tom Neyman), whose servant, Torgo (John Reynolds) alternates between “wanting” Maggie (it’s fair to that say his advances don’t quite work) and keeping her for his boss. There’s also a sort of ongoing struggle between two factions of the Master’s wives… because every cult leader needs more than one supermodel-looking wife, of course. As the family tries to escape, though, the worshippers of “Manos” (who also mention other “gods” from time to time) will decide their fates.

It’s not hard to notice why a movie like Manos would become such a gem for bad movie aficionados. Warren apparently wanted to craft some sort of thriller or horror movie, but Manos works better as a comedy, thanks to the horrible dubbing, stiff acting, and a couple of memorably strange characters. John Reynolds’ Torgo is the definite standout— he acts like a drunk most of the time, and according to myth, was given his weirdly-shaped legs due to Warren wanting him to look like a satyr. Years later this story was debunked, but the “official” one is no less funny —apparently, his deformity was an “homage” to characters such as Dr Frankenstein’s Igor, but unfortunately, the film’s budget only let him to look like a man with unreasonably large knees.

Manos’ editing is all over the place. Some scenes last too long while others are much too short; there are lots of unnecessary silences, ellipses and tons of continuity errors. One can even see the movie’s clapboard seconds before a scene transition; this is all the funnier, of course, when one considers that the film was shot without sound, and therefore didn’t need a clapboard, because there was no dialogue or ambient sound to sync up in post-production.

What really transforms Manos into comedy gold, though, is the dubbing. Apparently, Warren could only afford to have a couple of actors present during post-production, which wasn’t a problem for characters such as the Master or Torgo. In the women’s case, though, he had a single actress act out all their voices… and it shows. Even the little girl is dubbed by a grown woman, which results in hilariously creepy scenes with an adult actress trying out a terrible falsetto. There is no ambient sound —meaning most of the movie appears to occur in a void, or in the vacuum of space, for all we know— and no sound effects.

And the music. Oh, the music. One would expect a supposedly “creepy” movie to have an appropriately creepy soundtrack, but that’s not the case with Manos. Most of the background music is composed of jazzy tunes, supermarket Muzak, or something that’s supposed to be a theme for the Master and Torgo, and it really doesn’t work. It turns Manos into some sort of farce, which is good news for the audience —it’s hilarious!— but bad news for the filmmakers, who I guess were trying to make something a little more serious.

Bad editing, worse directing, awful, soap opera-worthy acting, continuity errors galore, unexplained cat fights between gorgeous women in white tunics, human sacrifice, dogs with more acting talent than their human counterparts, blatant sexism, a hilariously inappropriate soundtrack… Manos: The Hands of Fate has it all! And it’s only 74 minutes long, so you know it won’t wear out its welcome.

Oh, and for those who don’t speak Spanish, I must let you know that “Manos” actually means “Hands”… which makes the title of the movie even funnier (Hands: The Hands of Fate). Apparently, Tom Neyman, who played the Master, was also the film’s production designer and an accomplished artist, and was going through a hand-related phase in his craft. Which came first, Neyman’s work, or the movie’s main concept? We may never know.

Manos: The Hands of Fate is a movie for the ages, the perfect kind of entertainment for those seeking something weird, funny and memorable. Yes, it’s awfully made, and yes, it can only be enjoyed if watched ironically, but that doesn’t make it any less valid as a important piece of film history, a zero-budget, amateurish motion picture that has managed to transcend both time and its own limitations, to transform into something its makers probably never even dreamed of. It may not be a good movie, but it certainly is an entertaining one.

If you manage to grab a copy of its Special Edition blu-ray, I’d recommend to watch the special features, particularly the “Hands: The Fate of Manos” mini documentary. The story about the making of the movie is as fascinating as the finished product. (And even funnier).

Do you feel this content is inappropriate or infringes upon your rights? Click here to report it, or see our DMCA policy.
60s movieb-movieBlu-raycultHandsHands of FateHarrold P Warrenhorrorindie movieLimaManosMasterPerurestorationreviewsatyrSebastian ZavalaterrorTorgowtf