Blu-ray Review: HIS GIRL FRIDAY From Criterion Is Black and White and Read All Over 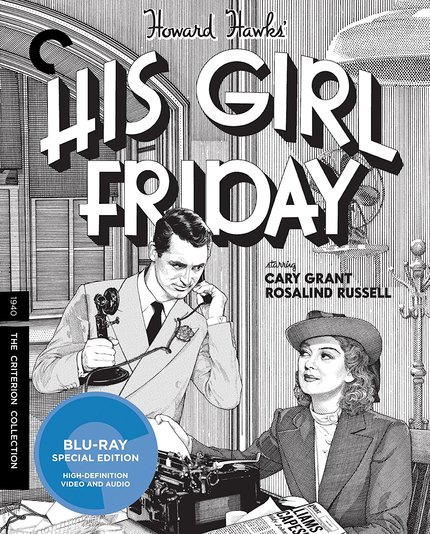 Trumpeted even today, well beyond its 75th anniversary, Howard Hawks' 1940 newspaper-centric screwball comedy is an undeniable keeper.  It’s also warped and batty with something of a dark streak. People throw themselves out of windows, morbidity that doesn’t stop the presses, much less the witty banter.

In this age of dying daily papers and the free press under apparent threat by incoming powers-that-be, the classic newspaper film can seem like something from another world.  The hustle, the bustle, the raw and constant immediacy of getting the news out - daily papers were portrayed as the vital and singular mass information source that they were. There is a whirlwind adventure fantasy vibe informing most of them; a type of "quest", the Truth as the prize. And if you can't get the truth, make something up!

Even then, though, a previewed element of non-reality must've been apparent. Case in point: the original torchbearer of the sub genre, 1931's The Front Page, opens with the onscreen notice, "This story is laid in a mythical land."

Legendary screenwriter Ben Hecht's barbed romanticism towards his own colorful journalistic past aside, the myth has essentially been made fact by pop culture's ensuing string of bustling fast-talking newspaper tales. From Sam Fuller's similarly autobiographical Park Row (1952) and Deadline U.S.A. with Humphrey Bogart (1952) to adaptations of comic books that were printed on actual newsprint, including the Christopher Reeves Superman films and Tobey McGuire's Spider-Man films, newspapers and newspaper people have been zippy, zappy and zingy pressure cookers.

The mother of them all, though, is the direct descendent of Hecht's play-made-into-film The Front Page, Howard Hawks' His Girl Friday.  If The Front Page got the presses fired up for stories of hardened reporters with slippery ethics, His Girl Friday was the record print run.  The latter being a remake of the former, with Charles Lederer adapting Hecht’s source material, it's fitting that both films be included together in this terrific package.

Star Cary Grant is still warmed up from starring in another definitive Hawks work a year earlier, Only Angels Have Wings. Rosalind Russell, though, proves to be his wily match. 'Round and 'round they go, at 300 miles per hour.  Or at least, 300 words per minute. (No, really - someone timed it!)  It’s also brimming with rich supporting performances, including Ralph Bellamy, Gene Lockhart, Porter Hall, and on and on.

The plot, for a comedy, is surprisingly dense. Lifting most everything from The Front Page, and then gender swapping Pat O'Brien's very male Hildy Johnson character to allow for a romantic angle, Hawks' film gets far more done in three-quarters of the running time. That's how much faster Friday is - and director Lewis Milestone's The Front Page is no slow talker.

Although His Girl Friday is revered and loved as the comedy classic it most certainly is, I confess to having something of a hard time with it. It's both claustrophobic and tightly wound, resulting in chaotic energy flying all around the room for the duration. It's a miraculous tension, and certainly something to behold, but it also somehow wears me out. (There, I said it!)  Maybe it’s the Front Page plot’s plottiness colliding with its own romantic interests, I don’t know. My own preference in screwball comedy doesn’t deviate far, to the even earlier Hawks/Grant effort Bringing Up Baby (1938).

Nevertheless, it’s great to see the film get the Criterion treatment.  And not just the regular Criterion treatment, but the rare deluxe two-Blu-ray, single-title release treatment, a la The New World, On the Waterfront, Seven Samurai or Heaven’s Gate. His Girl Friday’s terrific transfer and audio aside, the extras on the discs are terrific.  Plenty of fantastic little featurettes and newly-produced material, including a nearly half-hour appreciation by film scholar David Bordwell. The folded up essays that are included look like (what else?) newspapers.

And then the crème de la crème, a new 4K digital restoration of 1931’s The Front Page. Which raises the question …  while I’m grateful to have both films in one package - it’s impossible to talk about His Girl Friday at length without bringing up The Front Page - is it right to relegate Milestone’s film to a glorified extra on its more famous remake? Ah well. There are also two vintage radio adaptations of The Front Page, one from 1937, which eerily signs on with an upbeat blurb that their scheduled report from Amelia Earhart will have to wait until next week, as she had not yet completed her historic flight around the globe.

As one of the most “Hawks-ian” Hawks films, and one of Grant’s most machine gun-impressive performances, His Girl Friday is not to be missed.

Do you feel this content is inappropriate or infringes upon your rights? Click here to report it, or see our DMCA policy.
Cary GrantCriterionHis Girl FridayHoward HawksRosalind Russell

More about His Girl Friday