Review: In SING, Animals Compete, But No One Dies 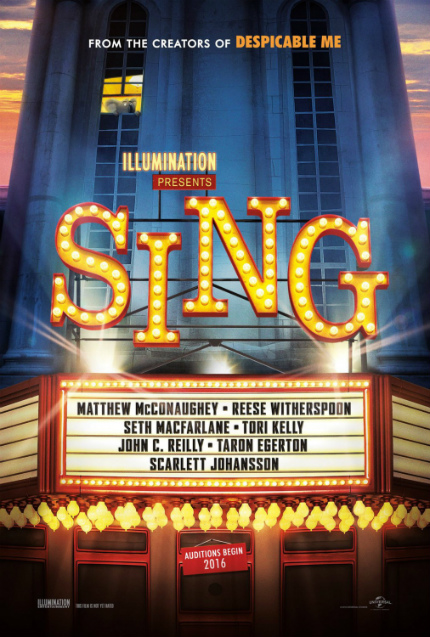 Watching Sing, a bland animated musical featuring the voices of Matthew McConaughey, Reese Witherspoon, Scarlett Johansson, Seth MacFarlane and many more, I struggled to recall the joys and pleasures of Son of Rambow.

That film was the sophomore effort of director Garth Jennings. He'd previously helmed The Hitchhiker's Guide to the Galaxy, an unwieldy adaptation of Douglas Adams' book that struggled to overcome high expectations and fell quite short. Yet it had promise and Jennings delivered on that promise with Son of Rambow, a rambunctious tale that truly captured the spirit of youth.

Years later, Jennings has written and directed a big-budget animated film that is a pale riff on American Idol, set in a world inhabited completely by anthropomorphic animals. It's a very safe world, filled with adorable antics, a place where the criminals are lovable, if a bit gruff.

All signs point to Sing as a movie for young children, an idea that is reinforced by the presence of Illumination Entertainment, the production company behind Despicable Me and Minions. Earlier this year, though, they were also associated with The Secret Life of Pets, a smart and clever animated movie that exceeded expectations.

In the case of Sing, the familiarity of the premise works against it from the outset. Buster Moon (Matthew McConaughey) is a koala who owns a failing music theater. To stave off creditors, he decides to hold an amateur singing contest; unfortunately, his assistant, Ms. Crawley (Jennings) prints out thousands of fliers promising a prize of $100,000, rather than $1,000.

Soon the entire city is lining up to audition. Buster narrows the field down to a handful of contestants. Naturally, they each have their own tale of woe and a big challenge to overcome before they can compete for the big prize. Those characters are voiced by Reese Witherspoon (neglected housewife with many children), Tori Kelly (stage fright), Seth MacFarlane (in debt to gangsters), Taron Egerton (in fear of gangster father), and Scarlett Johansson (punk rocker with unfaithful boyfriend).

For anyone who has ever been exposed to movies or TV shows about talent competitions, Sing will hold few surprises. The soundtrack, filled to overflowing with old hits, will likewise be unsurprising. The animation is colorful and top-notch, which is a kind distraction.

At its core, one if left to wonder why, exactly, Sing is set in a world of cute animals, when it takes little advantage of its setting or differentiates its characters from those found in the world of talking humans.

The film opens wide in theaters today throughout North America.