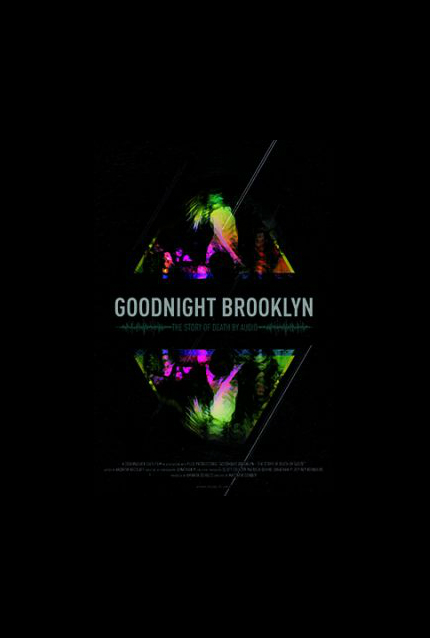 A bittersweet memoir of a independent music venue that proved to be much more than a place for bands to play their music as loudly as possible, Goodnight Brookyn - The Story of Death By Audio is also a screed against Vice Media, the corporate entity that swallowed it up.

Directed by Matthew Conboy, who co-founded the venue known as Death By Audio, the film doesn't pretend to be objective, though it begins with poignant notes about loss and loyalty. It's November 2014, and the Brooklyn, New York music venue Death By Audio is hosting its final show. Hundreds of devoted fans stand in line outside in the cold, refusing to leave even after a venue employee informs them that they won't be able to get inside. It's as though no one can believe what's happening, and by remaining, the fans can avoid confronting the harsh reality that favored venue is closing forever.

What inspired such devotion? The film rewinds to the discovery and creation of the "weird, punk warehouse" in Williamsburg, Brooklyn, circa 2005. Cofounders Oliver Ackermann, George Wilson, and Greg Wilson explain their similar motives to have a place to make music, noise, art, and friends. They threw large parties and charged admission to raise funds for construction and transformation of a former government office. Ackermann started a business, began making music pedals in the warehouse space.

Two years later Conboy and his friend Jason Amos moved from Denton, Texas, and found their places there too. Trying to pay rent, they turned a spare room into a "ramshackle" music venue, which quickly grew an audience and drew press attention. After Amos moved on, Edan Wilber came on board to book the shows and keep things humming.

Fast forward to September 2014. Conboy and Wilber announced that the venue would be shutting down at the end of November. Their landlords informed them that Vice Media would be taking over the entire building for new offices. The remaining hour of the documentary becomes a detailed accounting of those final two months, as friction with construction crews increases, as well as anger that a billion-dollar corporate entity, targeting hip millenials, was pushing out an enterprise driven by a feisty, do-it-yourself independent spirit, less concerned with profit than by a desire to open up opportunities to like-minded creative souls.

The irony is not easily lost. As the closing nears, and frustration rises ever higher, Conboy is determined to document everything he views as an injustice, and understandably so, in view of what he and his friends and associates built over a period of years. Sadly, it's a common story, especially in New York City. Enterprising artists must continually seek out new, cheaper, less inviting places to renovate and make livable, then their creativity draws new artists and visitor, along with businesses eager to tap into new markets, leading to seemingly inevitable corporate takeovers and a flattening of the individuality and creativity that drew visitors in the first place.

More historical context might have helped make the film even better. Was Death By Audio the first or only artistic endeavor in the area? How did longtime residents and authorities react? How did the neighborhood change and why exactly were new residents and businesses attracted to the neighborhood? A couple of these questions are touched on in the film, but more pointed discussion might have strengthened Conboy's arguments.

What comes across very strongly in Goodnight Brooklyn is the living, breathing, fiery passion of all those involved with Death By Audio. As it is, it's a valuable document of a vibrant spirit that extended far beyond its four walls.

Review originally published during SXSW in March 2016. The film will open at Alamo Drafthouse Brooklyn on Friday, December 2 and then expand to other theaters throughout the U.S. in the following weeks.

Trailer: GOODNIGHT BROOKLYN - THE STORY OF DEATH BY AUDIO from Dishwasher Safe Films on Vimeo.

Goodnight Brooklyn - The Story of Death by Audio