Review: Watch Out, THE MONSTER Hides Under The Drama

In Bryan Bertino's THE MONSTER, the acting wins from the creature.

It's been a while since Bryan Bertino's invasion thriller The Strangers premiered. It was a film which wrung a lot of tension from a simple premise, helped by strong acting from its terrorized lead actors. The same can be said about his new film The Monster, which shows the plight of a single mother and her daughter, who get attacked by a strange beast when their car breaks down in the middle of a forest.

And that, as they say, is basically the entire plot. Remember the scene from Jurassic Park where the two kids are in a jeep, at night in a rainy forest, and a T-Rex approaches? The Monster is that moment, spun out into an entire film of its own. 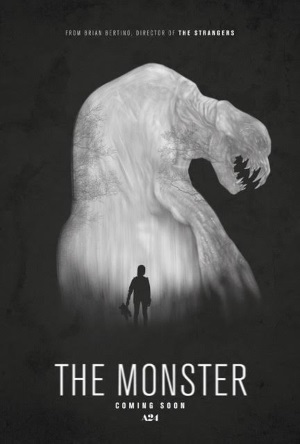 You might wonder if such a shallow premise can sustain an entire film, and it's a valid concern. Bryan Bertino also wrote the script, and to stretch the story out to a full 90 minutes, he added a lot of drama between the mother and the teenage daughter. Yet this "emotional padding" works hugely to the film's advantage, for the acting by both Zoe Kazan and Ella Ballentine is spectacularly fantastic.

Rather than setting up the mother and daughter as two heroes, Bryan takes time to show them being in a difficult relationship with each other. The mother is dealing with alcoholism and anger-management issues, while the daughter too often has to act as the parent for them both. The trip they make is to take the daughter to her father for a holiday, but both know the not-so-secret plan is for her not to return afterwards. Frequent flashbacks show the two carrying a huge amount of guilt and resentment around, but underneath all of that there still is an obvious, painful love for each other.

The powerful drama works splendidly in making you feel for both leads. Monsters are a lot scarier when you happen to sympathize with the people they prey upon, and this is what the film excels at. You want these two people to resolve their differences, but most of all you want them to reach the end credits more-or-less intact. So when, after much foreboding, the monster finally attacks, you feel despair rather than being entertained, and the film is all the stronger for it.

That's a good thing too, because once the monster is there (and yes, there IS an actual creature, it's not just a metaphor), the film moves onto oft-trodden paths. Actually, the case can be made that the drama, played by these two actresses, would have been strong enough to carry a film by itself, without any creature showing up. People looking for a scary monster flick may be turned off by the long build-up and the serious characterizations, while those looking for a well-acted drama may find the creature too brutal and scary for their taste.

Like its titular beast, The Monster is a weird hybrid. The film occasionally terrifies, occasionally fizzles, and the weird mix doesn't always work, but Zoe Kazan and Ella Ballentine still knock it completely out of the park. With his talent to get great performances out of his actors, maybe Bryan Bertino should next try focusing his talent on another blend of genres? Me, I will certainly be checking what he'll be doing from now on.


A24 will release The Monster In Theaters and On Demand on November 11. The film is available now exclusively on DirecTV.