THE MONSTER Interview: Alec Gillis and Tom Woodruff Jr. on Their Practical Approach to Monsters 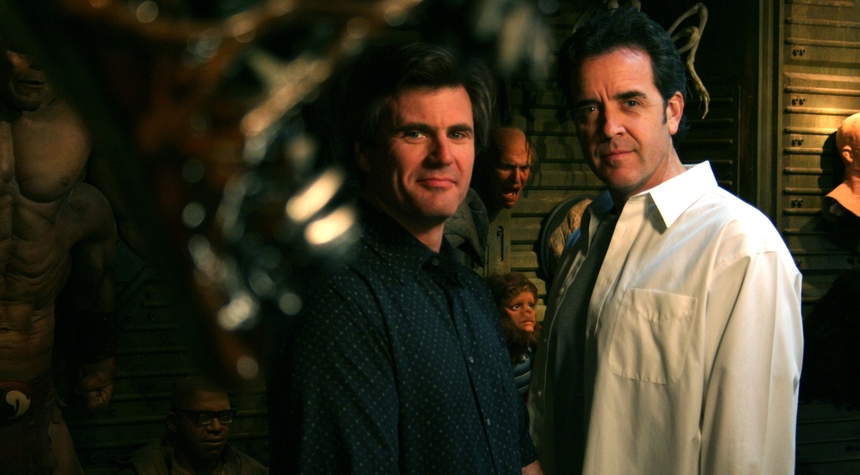 Creature designers and visual effects legends Alec Gillis and Tom Woodruff Jr. have filled our collective conscience with some of the most indelible movie monsters ever. From the Graboids in Tremors  to James Cameron's Alien queen, and more recently the aliens of Ender's Game and Skyline, the duo have always been on the forefront of monster movie making.

Their latest work can be seen in Bryan Bertino's The Monster, a harrowing film about a mother and daughter forced to fight a mysterious creature on a dark stretch of highway.

Reminiscent of 80's creature features, the titual monster is, of course, a practical creation, something its creators value over computer generated images.

ScreenAnarchy: People are fond of saying the best special effects are a blend of practical and CGI. Do you have a strong preference about how your own practical work is treated? Do you like it when it's enhanced or would you prefer it be left untouched and in-camera?

Tom Woodruff: Ultimately it's the result on screen that matters, but our preferece - and we're biased - is that practical effects give you a foundation that is very believable. The actors have something to react to for example. There are so many reasons to use practical effects. But that doesn't mean you shouldn't enhance or embelish them.

Sadly, a lot of the studios, to promote this myopic thinking, end up making everything look the same: This "Hollywood style"  CGI film. And by the way, we have a lot of friends who work in CGI who agree!  Who would love to see more practical work done, if only for their own sanity and work load and so their marriages don't break up and they don't work 20 hour days and so on.

Big Hollywood films don't tend to care so much what fans want or think. We've seen this in our own experience. Smaller films like The Monster - and this is another reason we wanted to be involved -  is that this film reminded us of the projects we worked on in the 80s. Where there was a script that was written by the guy who was directing it, he's an auteur, and the studio supports his vision. That's what this film was and it was very refreshing to us.

When you see a script like The Monster, how defined is the creature on the page and how much comes out of a development process with the director?

Bryan Bertino brought a lot of ideas to it. He also had a piece of artwork that he had commissioned that was a good basis for the creature, we had a lot of discussions with him and he had a very specific viewpoint about  the fact that it should be black and that it should be hard to figure out what exactly it looks like - humanoid is okay - but generally speaking it was a Rorschach ink blot where we want the audience to sort of read into it.

We made sure we gave certain points of reference, like the bloody sharp teeth and the reflective eyes, but Brian had a lot of great ideas and a lot of input.

AG: I think Brian was very wise in presenting it as something the audience can fine tune into what they want it to be or mean. He never hinted at what its origin was and we thought that was a very ballsey thing to do. And this is the right place to do it, in a film where it's all about the characters, the mother and daughter and the horrible relationship that hangs over their heads.

Tom Woodruff Jr: If you turn it into a monster-on-the-lose kind of film then you lose the emotional through line that holds the whole movie together.

The original title of the film was "There Are Monsters". I can't help but be curious if there was ever a version of the film that had multiple monsters.

TW: There was always a single monster, but when we first got the script I thought that title did a good job at rooting the experience in a child's point of view which is also reflected in the narration. I also think that you can find multiple monsters in the film. Alcoholism is a kind of monster as well, so you can take it to mean many things.

Brian is a very thoughtful writer and he doesn't spoon feed anything to the audience or the reader. Like The Strangers which had this creepy randomness to it. Very effective.

But, I don't know why they changed it. I suppose they figured fewer words are stronger in sales overseas or something.

Working in monsters and visual effects is such a specific path. Can you remember the moment that propelled you into wanting to make monsters for a living?

Alec: I suppose when I look back, it's me in front of black and white TVs when my dad would wake me up at night and say, "Hey come watch this" and it would be Immortal Monsters or something like that and it would just sort of imprint on you.

It wasn't until I saw a magazine with an interview with Ray Harryhausen and I realized that one guy had made most of my favourite creatures  that somethi8ng clicked in my head that it's a job. That somebody actually does this.  After that there was no looking back.

Tom: I was a little bit younger than Alec, but I also used to watch a lot of TV. I fell in love with the Universal Monsters and would play around with any makeup I could get my hands on. My dad taught me how to use the family 8mm camera and would make my own little movies. But I never stopped to think about it as a profession, I just kep forging ahead as if it was a path that was always set.

What can you tell us about your work on Shane Black's Predator?

The Monster is availble to view On Demand or in theatres.