Beneath its cheerful surfaces, a noxious message underlies Trolls.

This only happens once a year; the rest of the time, the Bergens stalk through their daily affairs in a miserable mood. The Trolls, on the other hand, are always happy, especially since the day 20 years before when their leader, King Peppy (voiced by Jeffrey Tambor) managed to save them all, including his daughter Poppy (voiced by Anna Kendrick). The Trolls went into hiding, but they all remain cheerful, except for one grouchy soul.

Branch (voiced by Justin Timberlake) is the sole voice of reason, warning his fellow Trolls to always stay on guard and to reject large gatherings or loud celebrations of any sort, lest the Bergens discover their whereabouts and come and eat them. Despite Branch being the only Troll with a sense of precaution and preparation, his warnings are ignored and his reasonable attitude is derided with ridicule by one and all.

Then the Apocalypse arrives in the form of Chef (voiced by Christine Baranski), a Bergen who was disgraced when the captured Trolls engineered their escape two decades before. She's kept a careful eye out and when the Trolls celebrate too loudly one night, she is ready to pounce, capturing a handful so she can serve them up to the Bergen ruler, King Gristle (voiced by Christopher Mintz-Plasse), in hopes of regaining favor. 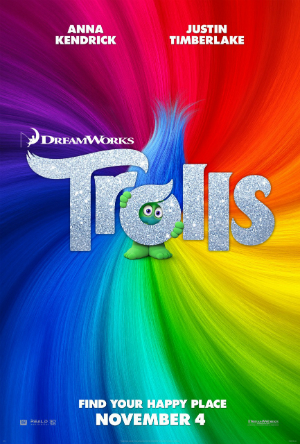 The ever-optimistic Poppy refuses to give up on her friends, so even as her people retreat into another new hiding place, she sets out on a heroic trek to save them, betraying the trust of Branch -- by invading his well-prepared storehouse -- so that he'll accompany her.

Poppy preaches, in essence, 'Don't prep; be happy.' Why worry about or prepare for disasters? Just sing and dance and hug, and somehow all your needs will be provided for ... by God, god, or some other deity? No, but by the single Troll who made advance preparations! And when those supplies run out? Don't worry! Be happy!

This is the kind of pie in the sky mentality that may reassure little children as they are embraced by loving parents in comfortable material surroundings. For everyone else, however, it's a recipe for further disaster.

After singing and dancing, Poppy and Branch eventually reach the land of the Bergens, a race of unattractive people who are dour and unhappy all day long. There they meet up with a potential Bergen ally, allowing pretty, happy Poppy to work her optimistic magic on the not-so-pretty, unhappy thing.

In real life and in the movies, it's always pretty, happy people who tell not-so-pretty, unhappy people, "Oh, you just have to ignore all *my* advantages! True beauty lies within!" Uh, huh. The movie is inspired by a line of Troll Dolls, first created in 1959; Jonathan Aibel and Glenn Berger are credited with the screenplay, based on a story by Erica Rivonoja.

Aibel and Berger have cooked up scripts for Kung Fu Panda, Monsters vs. Aliens, and The SpongeBob Movie: Sponge Out of Water. Director Mike Mitchell has both live-action (Deuce Bigalow: Male Gigolo) and animated credits (Alvin and the Chipmunks: Chipwrecked). Those credits give some idea of the silly sense of humor on display in the movie.

Chances are good that young children will not be consciously aware of the incessant messaging that is communicated by Trolls and, even for adults, it may be entirely possibly to walk away from the experience and remember only the surface cheeriness. Without such pleasant distractions in mind, however, the militantly positive vibes are much more difficult to swallow.

The movie is already playing in many territories worldwide. It opens wide in theaters in most other territories, including Canada and the U.S., this weekend, November 3-4.

Do you feel this content is inappropriate or infringes upon your rights? Click here to report it, or see our DMCA policy.
Anna KendrickGwen StefaniJames CordenJustin TimberlakeZooey Deschanel