Review: DOG EAT DOG Doesn't Give A Shit What You (Or I) Think 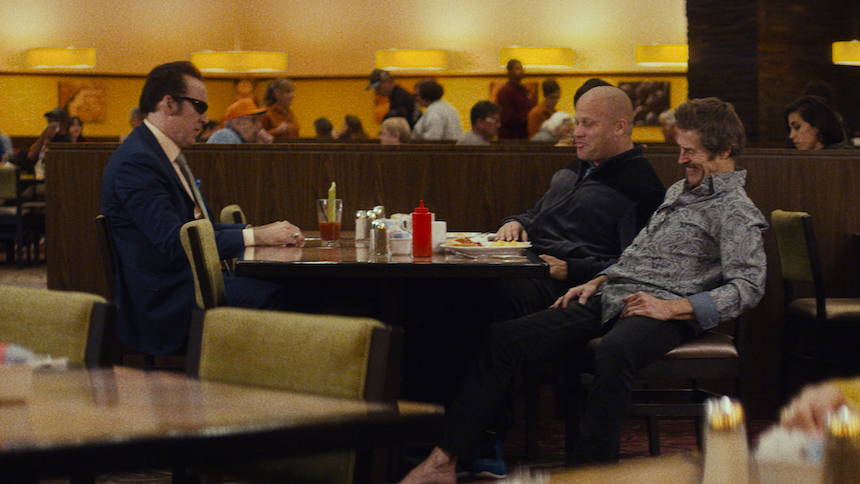 The press notes for Paul Schrader's grotesque, and let's face it, kind of loopy, story of disorganized crime offer a mission statement for its own unusual blend of zero budget and A-list talent: "The freedom not to be boring."

This independent ethos could have easily been phrased as the freedom to not be in good taste, or the freedom for conventional story structure to go fly a kite. Dog Eat Dog is imbued with a nihilistic vibe; it is not a pleasing movie and has zero fucks to give about it. It is simultaneously awful and energetic, playful and pitiful, like a puppy with rabies - you cannot take your eyes off of the sight, but it kind of makes you sad because you just know the situation has to end badly.

For me, watching the film was akin to seeing David Lynch's Wild At Heart distorted in a fun-house mirror (Dog Eat Dog re-unites Nic Cage and Willem Dafoe once again as incompetent neverdowells) while off to the side, someone was, loudly, channel-hopping through the slew of late 1990s Pulp Fiction-wannabes (I am looking at you, Things To Do In Denver When You're Dead, and also you, Who Is Cletis Tout.) It is noteworthy that Eddie Bunker made a cameo in Quentin Tarantino's debut feature, Reservoir Dogs (as Mr. Blue) because he wrote the novel that Dog Eat Dog is adapted from. Even the title here is weirdly referential to Tarantino.

The story, as it were, covers a few days in the life of chatty riff-raff, Troy (Cage), hanging out in strip bars and casinos with his small time criminal buddies. One is the eager to please, but batshit crazy, Mad Dog (Dafoe) and the other is an introspective brick-shithouse enforcer named Diesel, played by Christopher Matthew Cook. The film, sporadically, attempts to be a character study of all three members of this motley crew (and their atypical chemistry) while they are either, on a job, partying after a job, or hustling a new job through Troy's 'crime-agent' nicknamed named El Greco. The Greek (Paul Schrader, who, I must say, cameos quite fine) conducts his business affairs from a handsomely appointed Cleveland restaurant that has been designed to look like an expensive Chinese eatery located inside a bank vault. There are plenty of these beautiful little details on display, it almost qualifies Dog Eat Dog as a piece Dada-ist post-modern satire. Almost.

The rhythm of the film, however, feels like an attempt to conduct a Sundance Actors Workshop in the midst of a condiment fight. Suffice it to say, things are messy. Whether the direction is going for a collection of deadpan Saturday Night Live sketches (one of the better ones involves a fake cop car in the sequence where the trio pretend to be police officers) or it is aiming for a kind of meta-movie implosion along the lines of Schizopolis (at one point, Dafoe is shown making those Soderbergian facial expressions in a mirror) Dog Eat Dog is a loosely, often hazy cocktail of non-sequitur laced with unabashed nastiness.

The opening scene sums this up: A coked out Mad Dog is watching a talk show on gun control in a house that is entirely decorated in pink, the phone, the carpet, the wallpaper, everything. Little televisions appear embedded in the frame in front of him like a cartoon (or SCTV's Gerry Todd), while the phone rings shrilly in the background. An obese woman and her teenage child barge into the middle of this, disdain on their faces and unicorn silkscreened shirts on their backs. Mad Dog pleads with the woman, an ex-flame, to stay the night until his car is fixed (on her dime), but she throws an ugly tantrum that prompts him to awkwardly (and violently) murder them both. It's loud and weird, curiously cold, and gloriously in bad taste.

Cut to a strip bar with Troy rocking a pastel coloured suit, monologuing about Facebook and Taylor Swift while simultaneously complaining about the colour of another mans pants -  the colour of both of these we cannot see, because the scene is shot in black and white. Dog Eat Dog disposition at times, is as passive-aggressive as its main characters. Schrader's direction jumps from one style to another without apparent rhyme or reason, and to add insult to injury, he often violates 180 degree eye-line rule just for shits and giggles. Nicolas Cage, free to do his weirdo-thing has a habit of breaking into Humphrey Bogart affectations, while Dafoe spouts some (admittedly entertaining) factoids from self-help manuals, forensic science and CNN's Sunjay Guptar.

You will remember that Paul Schrader started his career writing high-brow violent screenplays for Martin Scorsese, such as Taxi Driver, Raging Bull and Bringing Out The Dead. He has directed some pretty iconic if not mainstream films including the over the top porn-hysteria father-daughter tale, Hardcore, as well as the Cat People remake, and Russell Banks novel adaptation, Affliction.  Among his recent micro-budget efforts is The Canyons, which made rather effective use of a burned out Lindsay Lohan and porn star James Deen in a bit of intelligent navel gazing to dwell on the death of the cinema. Dog Eat Dog is the furious entropy left in the wake of that death. In a way, it is a primal scream.

You might recognize fragments and concepts from other films, but they adrift. If there is a pleasure to be had here, it is watching the world burn. Willem Dafoe happily lights the match, while Nicolas Cage cackles and poses wildly,  pointing at the sky with his head down in an Elvis pose with a Bogart grin. Schrader, and his screen-writer, Matthew Wilder, may be bashing us over the head with the notion that the modern world is a baffling place, whether you are a recently out of prison career criminal, a religious couple out for dinner at the local diner, or someone who made their choice of evening entertainment a film called Dog Eat Dog.

I cannot say exactly how this will play in a sparsely attended art-house theatre, or god forbid a multiplex, or (perhaps more likely) on Netflix. When I caught the film at the Toronto International Film Festival, it felt like a solid fit for the midnight crowd, and I admit that the experience was rather delightful in the midnight slot with a festival audience of about a thousand.

Dog Eat Dog has even has occasional flashes of brilliance, a scene where Mad Dog ecstatically praises the feel of carpet under his feet after so many years in prison; the manner in which a supermarket manager describes a suspicious customer to a police officer; and a trio of matching scenes where each of our 'heroes' spectacularly fail to get laid in ways that are as genuinely awkward as Jack Nicholson in Hal Ashby's The Last Detail. The rest of the movie is, however, quite vulgar nonsense masquerading as some kind of perverse contemporary art. It is a great bad movie, but not a terribly good one. And it isn't boring.

Do you feel this content is inappropriate or infringes upon your rights? Click here to report it, or see our DMCA policy.
Nicolas CagePaul SchraderWillem Dafoe