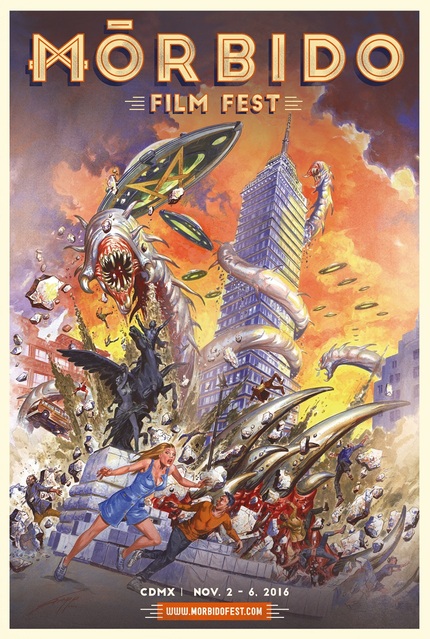 Morbido Fest 2016 goes from November 2 - 6 in Mexico City this year, and I can't tell you how excited I am.

It's my first Morbido, and the second time I've had a short film in the festival. (Last year was Postpartum, this year is Innsmouth.) Sure I'm excited to present my film, but I'm on the edge of my seat to see John Landis present An American Werewolf in London. It was a seminal film in not just my own development, but in thousands of warped minds the world over. It's one of those magical full-circle moments that stuns in its perfect simplicity: seeing one of the films presented by its creator that defined, thrilled, and essentially, helped form you.

I might be a little sheltered where it comes to world cinema, so I'm looking forward to seeing the Latino America spotlight. That program contains films from Argentina, Chile, and of course, Mexico. I'm particularly interested in the short films, of which Morbido offers plenty. The program names tease the imagination with titles like "Extreme Delights" (my film's in that one, and I'm drooling over the selection), "The Dictatorship of Chaos," and "Postcards from the Crime Scene."

Features play too, of course, from new flicks such as The Void, The Mermaid, and The Wailing play alongside festival favorites like Swiss Army Man and The Greasy Strangler.

And then there are the events. I've been promised ancient ruins, a spectacular opening night extravaganza, karaoke, parties, lucha libre, and more. Additionally, festival director Pablo Guisa Koestinger has become known for crazy costume changes that pay tribute to the films he introduces. Last year, one of his get-ups was as a crispy ghost for We Are Still Here. I only saw a photo, but it looked insane.

See more on our report of Morbido's full line-up here.

Do you feel this content is inappropriate or infringes upon your rights? Click here to report it, or see our DMCA policy.
An American Werewolf in LondonJohn LandisMorbido 2016

More about An American Werewolf in London