Los Cabos 2016 Review: THE ISLANDS AND THE WHALES Takes A Fascinating Look At A Remote Community 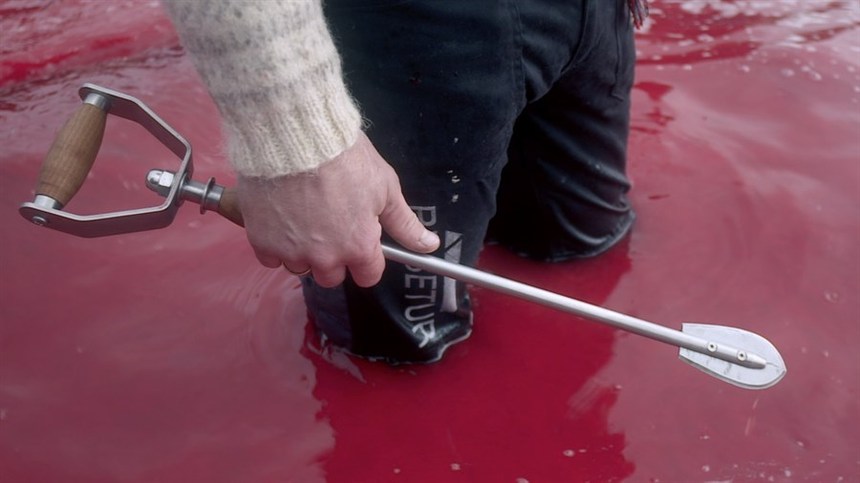 The notion of cultural relativism is one that goes back to the late 19th century and is one that’s often simply conflated to mean “you have your way, I have mine”. It was an attempt, through its sister moral relativism, to eschew dogmatic or prescriptive ways of looking at world views. The colonially minded who would traipse across the world would see the savagery of the other and simply dismiss all differences as inferiorities, and thus the notion of taking things on their own terms was a welcome respite to this kind of arrogance or blindness.

In fascinating ways The Islands and the Whales takes on these cultural and moral norms in a very different context – rather than the prevailing divides between practices, where the dominant white, European culture is often supplanting or at least recontextualizing the behaviours of those that they’re encountering, this film looks at a kind of white-on-white quagmire. In the Faroe Islands, where for generations  the descendants of Vikings carved out a unique existence on these far flung rocks, their indigenous ways of being are being challenged by the same forces shaping communities throughout the world, be they in the form of international protest of practices felt to be savage through to the consequences of environmental catastrophe affecting every corner of the globe.

As a community that has been sustained of the bounty of the area – sea birds and large marine mammals – the Faroe Islanders are themselves subject to forces outside their community that are changing their way of life. On health grounds they’re consuming more and more mercury, evidence of the way that remoteness is no buffer from the rest of the planet’s inhabitants affecting one another in often catastrophic ways. Yet to  maintain their sense of culture and community they continue to consume these creatures like whales that contain high levels of mercury not only as a form of protest but also with a deep sense of tradition and pragmatism.

As everyone from a local doctor performing a generations-long study into their bloodwork through to anti-whaling activists, the film documents the forces looking to shape the way of life into something a bit more sustainable. Yet answers do not come easy, and fatuous prescriptions to “become vegetarian” are proven all the more ignorant when spouted by outsiders unaware of the lack of arable land. The doctor, a member of the community, speaks of his own ambivalence, talking of the challenges of speaking about scientific accuracy when the effects of slow-drip poisioning are hard to effectively demonstrate.

This slow-drip of course is exactly the same challenge that climate change activists run into with deniers, but the film manages to beautifully underscore the quite reasonable skepticism of those that feel it’s nothing less than the attempt by authorities to perform a kind of cultural ravagement, violently removing what ties these Islanders together in the first place in favour of the more banal or homogeneous. The trade off between native fisheries and importation of goods (and the same related economic costs) makes the ambivalence shine through even more.

Director Mike Day and his team of editors deftly underscore their points without histrionics or overt agenda, showcasing the complexity of the situation in all its gory details. One tacit element of course is that the more poisoning that takes place the more effect it has on the mental capacities of those residents, causing a kind of awful tautology that makes rational decision making even more challenging. Yet this contrasts intensely with the petulant, gormless reaction of those simply wanting an end to whaling full stop, unaware of their own unintended consequences.

With sumptuous photography that brings to life both the forbidding environment and its remarkable people, The Islands and the Whales is a showcase for environmental journalism and documentary done right. Balanced without being boring, this is a film with a keen point of view unafraid to let its participants articulate their own visions, making for an extraordinary, intimate and frankly unforgettable voyage into this land of many contradictions.