Pretty Packaging: THE IRON GIANT Gets A Giant Boxset

Ard Vijn
Editor, Europe; Rotterdam, The Netherlands (@ardvark23)
Tweet Post Submit
In 1999, Warner Brothers was regretting its investment in its own animation studio, and was already planning an exit strategy for it. One of the smaller titles still being released was Brad Bird's The Iron Giant, about a boy who, in the "commie-hunt-crazy" 1950s United States, befriends an alien war robot from space. Within the studio the film was seen as an oddity, merely charming at best, and given a small release to be done with it.

But upon its premiere, its excellence surprised friends and foes. It also surprised Warners, who didn't have a clue on how to market it properly, even though reviews and audience ratings were ecstatic. It was an instant classic, but only for those few who saw it before it left theatres. Director Brad Bird had made his mark though, and would quickly be picked up by Pixar, for whom he would make another awesome retro-styled animated film called The Incredibles.

To say time has been kind to The Iron Giant is an understatement. It still is without a doubt one of the purest and most beautiful animated films coming out of America in decades. And like with Blade Runner, even its owner now looks upon this beloved mongrel with feelings of kindness.

Yes, Warner Brothers is very proudly calling this film "theirs" these days, and have given The Iron Giant a classic pimped release, similar to their Wizard of Oz and Willie Wonka and the Chocolate Factory releases. It contains both the theatrical and the 2015 "Signature" cut of the film, and a big making-of documentary called The Giant's Dream.

It also looks pretty. Therefore, here is a gallery of shots. Click on the edge of the pictures to scroll through them, or at the centre of each to see a bigger version. 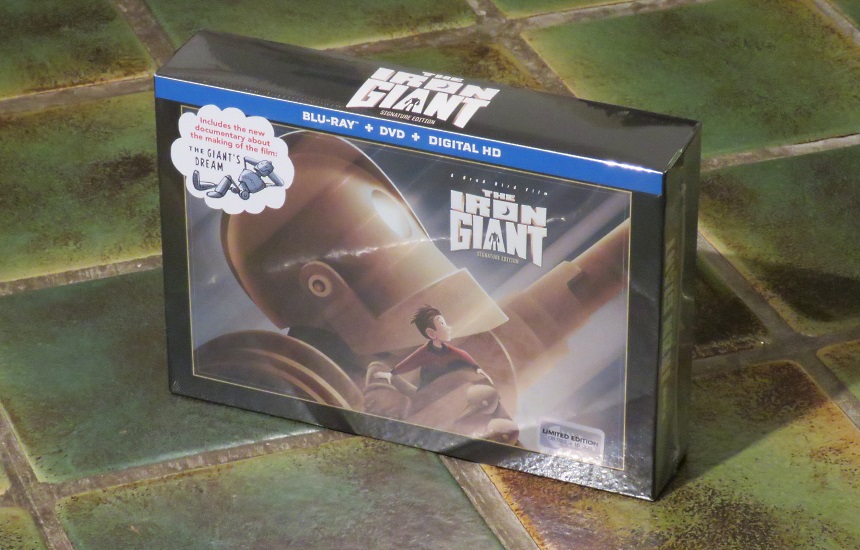 And here it is: a giant box. 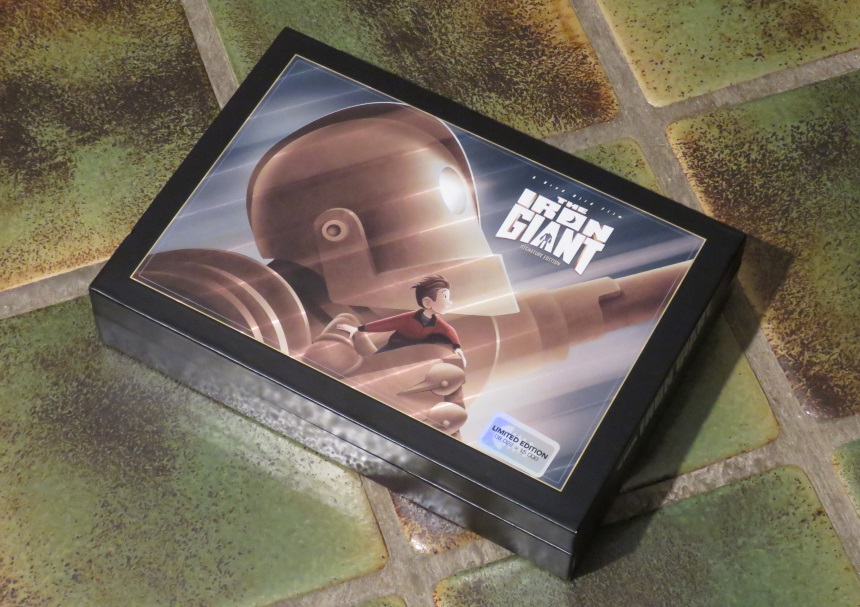 The giant box with its seal and "this is a Blu-ray" wrapping removed. The image has a beautiful shimmer over it, which changes all gleams into diagonal lines. 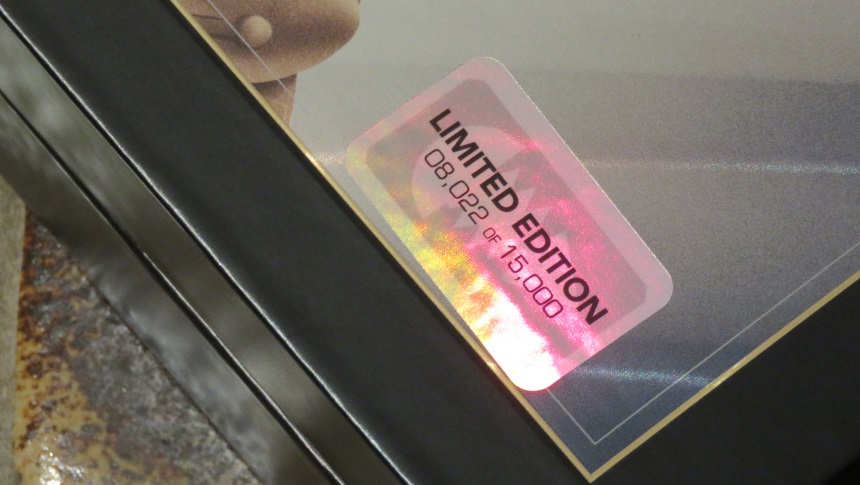 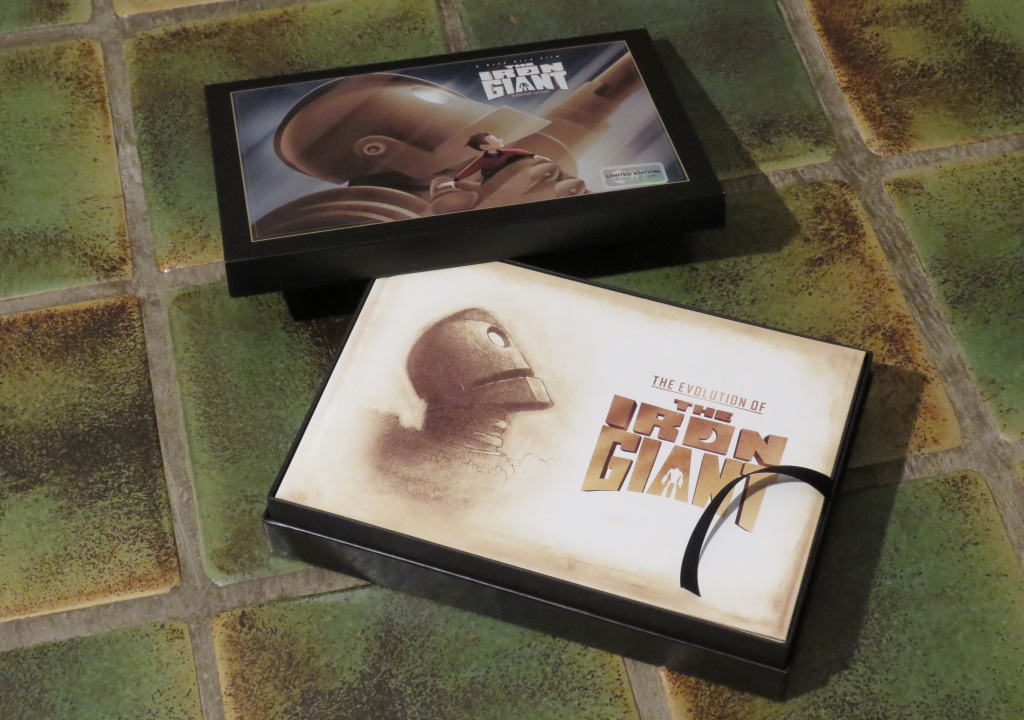 Opening the box, the first thing you see is the design book. 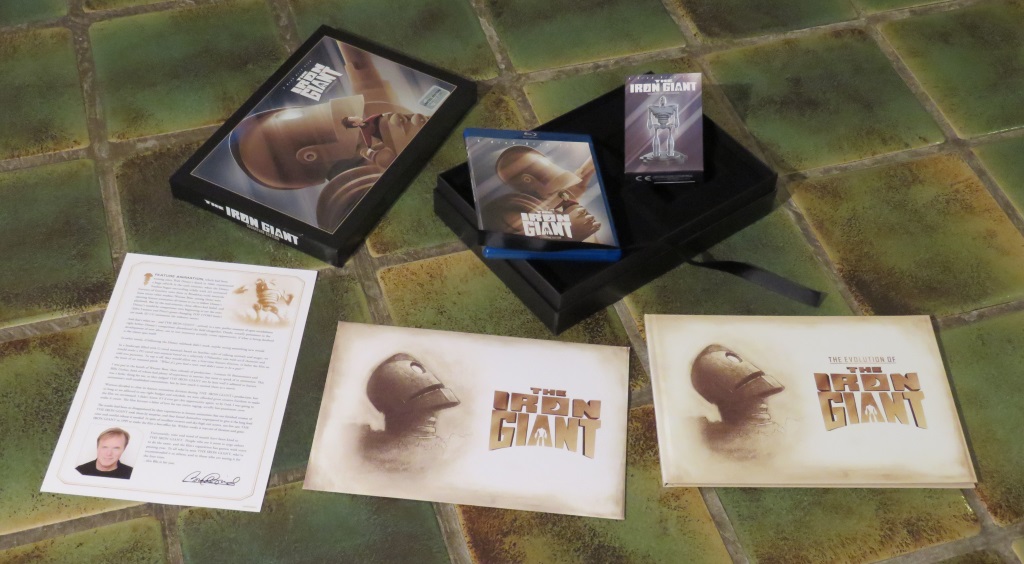 Taking out all the contents: the Blu-ray, a letter from director Brad Bird, an envelope with mini-posters, a book about the film's designs, and a model of the Iron Giant. 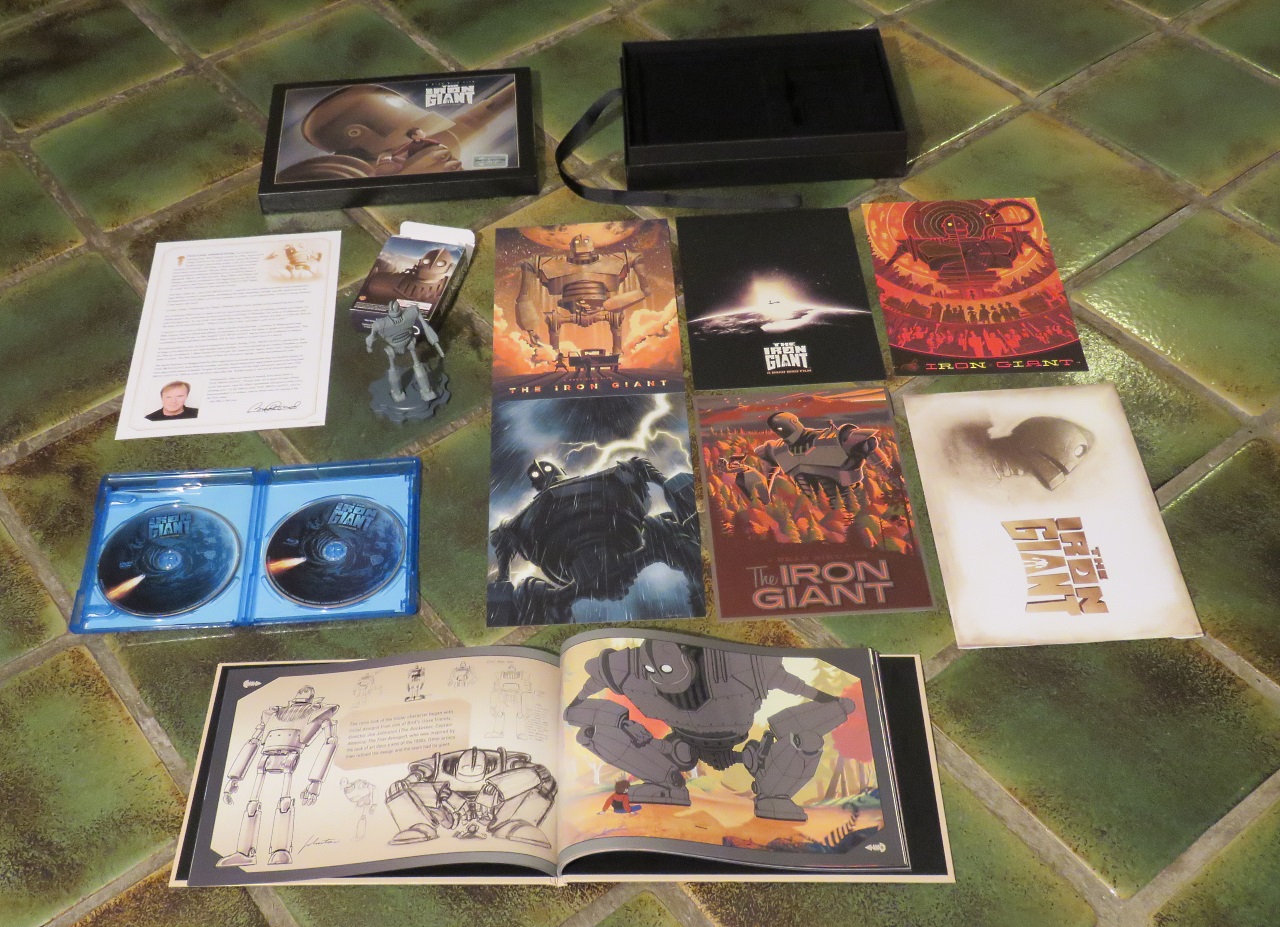 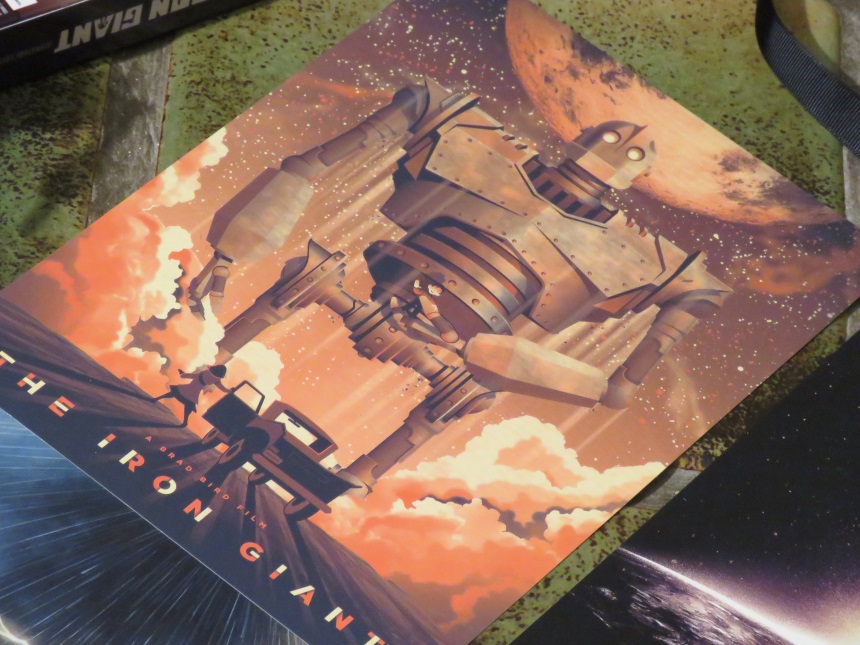 The mini-posters are all awesome, and I would gladly own each of these as a one-sheet size. 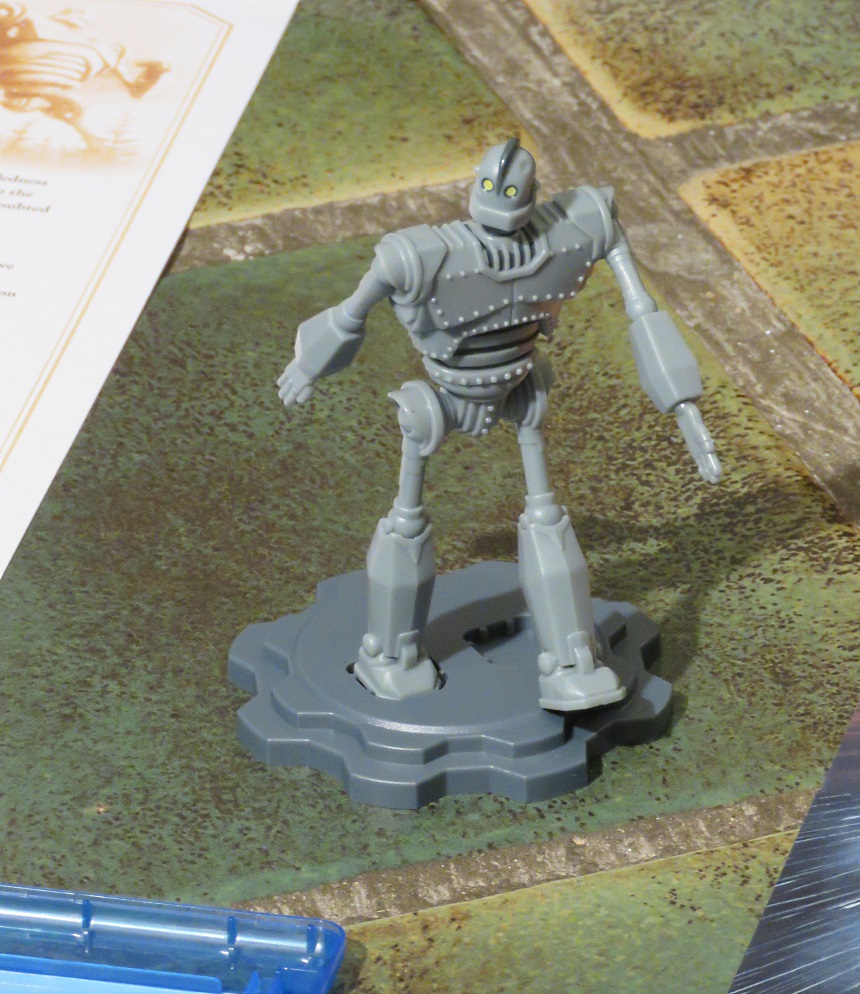 The Iron Giant model is a plastic one, and can be posed as its joints can be moved. It comes with a socket. 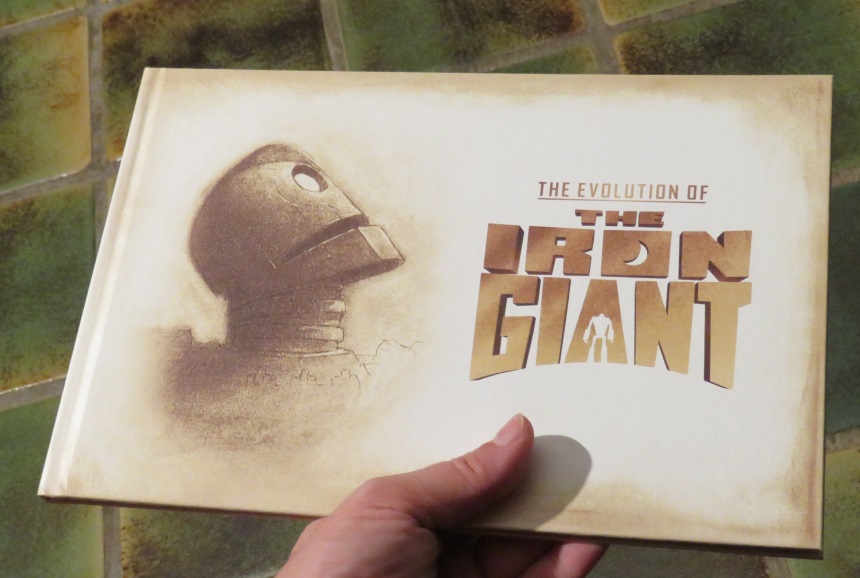 Here is a closer look at the design book. It's big and a hardcover, although a pretty thin one at 40 pages.

The pages are all very cool though!

Still, at 40 pages it's an excerpt of a bigger 144-page book called "The Art of the Iron Giant". I would gladly have paid a few dollars more to get the full book. 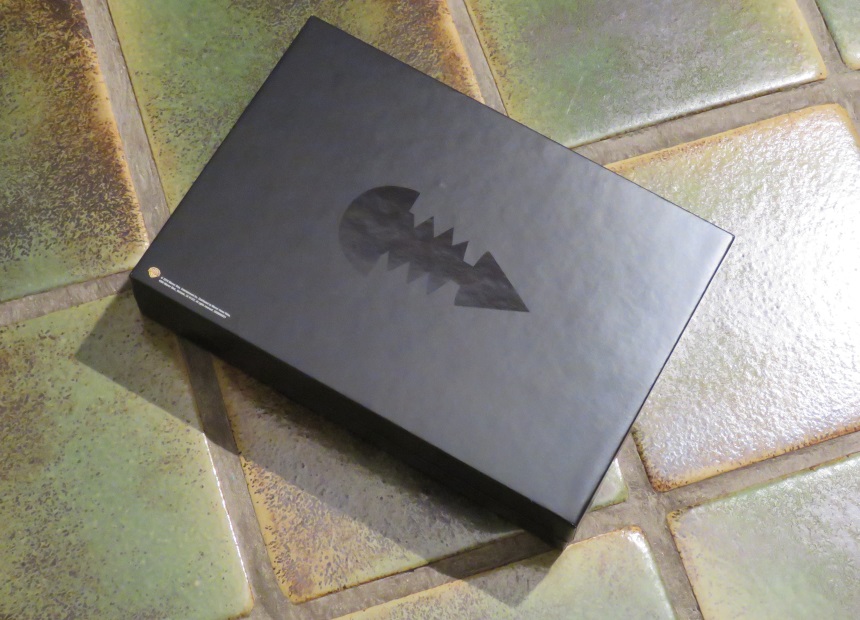