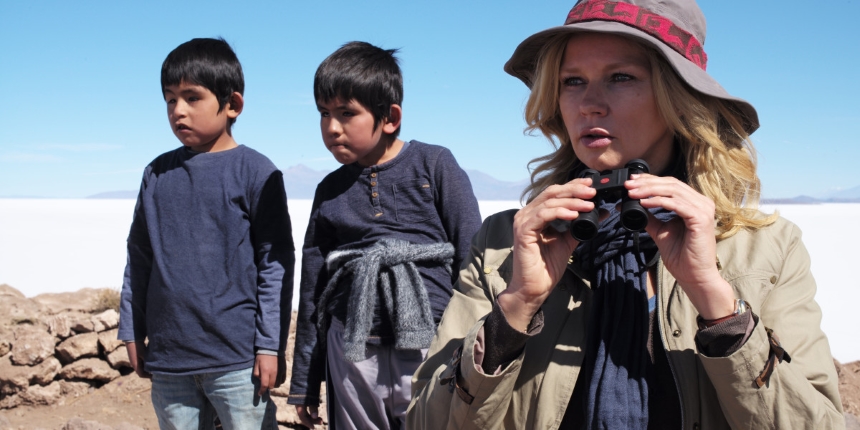 Roger Ebert once said of Werner Herzog that, 'even his failures are spectacular.' I'm curious if he were alive today, what he would have made of Salt and Fire, a rushed, sloppy and rather turgid film that has been (charitably) billed as a 'thriller.'

The film does seem to aspire to be, simultaneously, an ecological disaster film, a cast-away reverie, and a grandiloquent farce, but it also feels like Herzog at his most slap-dash. With the iconoclast pumping out two features and two feature length documentaries in the past two years (on top of running his Rogue Film School, and, I would hazard a guess, several other curious ventures) one wonders if the 74 year old has spread himself too thin. That is not to say there is a lack of interesting images and ideas here, but they take place in a filmmaking vacuum.

In some unnamed South American country, a lake at the base of a dormant volcano has transformed into a rapidly expanding desert salt-flat named El Diablo Blanco (Herzog's obsession with albino lizards makes an in-name-only cameo here, after the gonzo epilogue of Cave of Forgotten Dreams.) The United Nations believes the cause to be, at least in part, due to corporate malfeasance, and sends a small delegation of scientists to gather data, and report back.

The three person delegation consists of an equipment handler so non-descript that I never noted the character's name but is nevertheless played by German character actor, Volker Michalowski (Inglorious Basterds, The Lives Of Others), as well as a pampered and pervy Latino attache, Dr. Fabio (Gael Garcia Bernal, who is both embarrassing to watch, and utterly wasted), and the feisty project lead, Dr. Laura. Played by Veronica Ferres in the ultra-rare position of being a female protagonist in a Hezog film, the german star brings a strong human prescence to a woefully underwritten protagonist.

They are, in short order, kidnapped by the philosophical, wild-eyed CEO Matt Reily (Michael Shannon) whose water appropriation scheme very likely caused the ecological disaster currently in progress. He has a strange counter-scheme, a plan he sets into motion to mollify his own guilty conscience. Or perhaps save the planet by altering the very nature of human perspective (this underscored by the films nutty final punchline.) Suffice it to say, if you were running for political office, you probably would not want Werner Herzog to be your campaign strategist.

There are three distinct acts in Salt and Fire, but it is the furthest thing imaginable from any kind of traditional three act structure. The first is the kidnapping processes, unfathomably distended in length, and executed out of order for no fathomable reason other than to bleed away any potential audience engagement. When a wheelchair joke and comments about diarrhea is the best material, well... let us move on. The second act dabbles in both data and romance, as Riley aims to seduce Laura by discussing Italian sanctuaries and anamorphic art, spouting esoteric aphorisms such as "Truth is the only daughter of time." Just when you think we have hit peak-Herzog, act three has Dr. Laura stranded on an island, a cluster of rocks in middle of the endless sea of salt (insert 'desert island' joke here) with two blind children playing boardgames. The fact that the film follows or does not follow typical film structure is not a bad thing in itself, of course, but his subversion of banal Hollywood screenwriting technique here is seems adrift, and without purpose.

Furthermore, I get that the German auteur has always been obsessed with strange stories of survival in unforgiving and implacable landscapes. From Aguirre, The Wrath of God's Peruvian jungle of hell, to Stroszek's isolation in the American midwest, to even Nicolas Cage's post-existential and moral crisis during a Katrina ravaged New Orleans in Bad Lieutenant. However, in spite of Salt and Fire harvesting some impressive imagary of the Bolivian Uyuni salt plains, while offering a desperate plea to change how we perceive the world (in our puny human ways) and posessing an earnest desire to make poetry out of scientific data, one has to acknowledge that the cinematic result is an overlit, gangly mess.

In the end, Salt and Fire verges on being a parody of the director's filmmaking unique genius. The very caricature that the entertainment press has been feeding for years. This might even be apropos of the global climate crisis and current conversation around it. Alas, it is not, as Ebert put it, spectacular.

More about Salt and Fire