Springbok Cinema Review: Homeward Bound With THE BOERS AT THE END OF THE WORLD 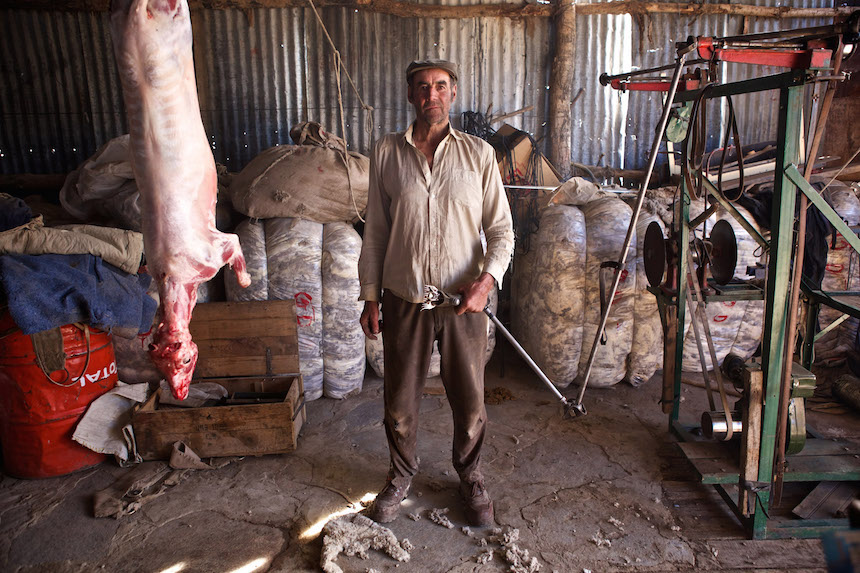 Richard Finn Gregory's The Boers At The End Of The World (in its native Afrikaans: Boere Op Die Aardsdrempel) was the finest South African documentary of 2015, and easily made my Springbok Cinema list of the country's best work. Following a rapturous local run, which culminated in three Golden Horns at this year’s South African Film and Television Awards, this obscure South African delight is finally available worldwide, and we finally have a full review to celebrate.

A century ago, following bitter defeat to the British in South Africa’s Second Anglo-Boer War, cohorts of Afrikaans families - boer descendants of Dutch-speaking early settlers - left their African roots for Argentina. There they found refuge and a fresh start in Patagonia, an arid and remote landscape eerily reminiscent of their homeland. There too they’ve sustained their archaic langage and pastoral culture, marooned, for a hundred years. A century later, this remarkable documentary brings their unique community to light, and captures a profound homecoming sure to stir even the stoniest heart.

Despite essentially bearing sad witness to the inveterate erosion of their Afrikaans oasis, The Boers At The End Of The World is an unabashedly uplifting experience. Rather than dwell on demise, much like the boer zen we hear from several characters, the film celebrates life and legacy, and offers up a trifecta of intellectual stimulation, emotional satisfaction, and sumptuous beauty. Linguists are still publishing academic papers on the community’s archaic Afrikaans; the cathartic homecoming will swell the most cynical soul; and the film is an exquisite sensory experience, absolutely deserving of its SAFTA accolades for cinematography, sound, and editing. 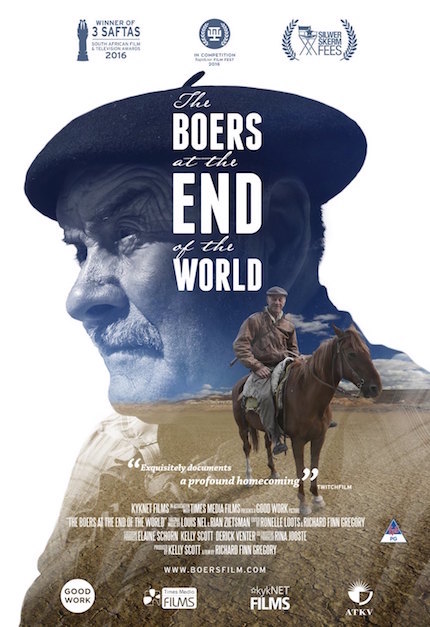 Long-term readers may recognize the story from previous coverage; we first began watching the project in early 2014, when its short-form proof-of-concept - The Last Boers Of Patagonia - went viral in South Africa. We've continued watching as both the local film industry and crowdfunding community embraced the project, bringing the story to feature-length fruition. A one-man-show for much of it's production, Gregory demonstrates varied prowess behind the camera, and it's exciting to hear that he has a narative feature brewing next.

Gregory is himself a South African of English descendent, which could well have been a sensitive point in selling such quintessentially Afrikaans history, given the colonial atrocities that precipitated this tale. However, his obvious devotion to the project clearly won the trust of the Patagonian Afrikaner community, and also seemingly enabled him to attract phenomenal Afrikaans talent for post-production.
Ronelle Loots is a busy Afrikaner editor who has worked on at least three recent award-winning productions - Durban Poison, Four Corners, and I, Afrikaner - and the musical team of Louis Nel and Rian Zietsman - better known as the Afrikaner musicians behind local rock bands Taxi Violence and Beast - produced a sublime soundtrack that fuses traditional Argentine and Afrikaans influences (and in so doing, I might add, reveal that the serendipitous similarities between these worlds extend beyond landscape and pastoral lifestyle).
Documentary filmmakers tend to maintain a distance from their subjects, and indeed the short-form Last Boers Of Patagonia was a traditional hands-off documentary, observationally introducing the Dickason family's charismatic patriarch and his small community of Afrikaner family and friends. The feature-lenegth Boers At The End Of The World, however, is undeniably imbued with a more personal - more involved - touch.
There's a sense that Gregory has become entwined in the community, perhaps inevitibly given the warm welcome, and that the work itself has become a reinvigorating catalyst of sorts. The filmmakers in fact contributed to two important community developments that are captured in the film: a visit by an Afrikaans linguistics professor and his colleagues, to interview speakers and document their unique Afrikaans; and the reunion of the Dickason family with their ancestral roots and long-lost family in South Africa.
In some documentaries, the fingerprints of filmmakers on the tale itself can be cause for concern, particularly when subjects are contentious or vulnerable. In the case of Boers however, the very telling of their story just is the antidote to their diminshment by disconnection and obscurity. The ripples from this film have already reconnected lost communities to their roots, families to each other, and a fading language to its thriving source. The Boers At The End Of The World isn't just an interesting, heart-warming, and beautiful documentary; it's good work that has made a difference.
In recognition of our site's long-sustained interest in this project, the filmmakers are offering a 20% download discount to ScreenAnarchy readers for the next week (until September 21). Take advantage of the deal, and be uplifted by the film.
Download it at: https://vimeo.com/ondemand/boersfilm
Use the 20% ScreenAnarchy discount code: anarchy20

The Boers at the End of the World

More about The Boers at the End of the World