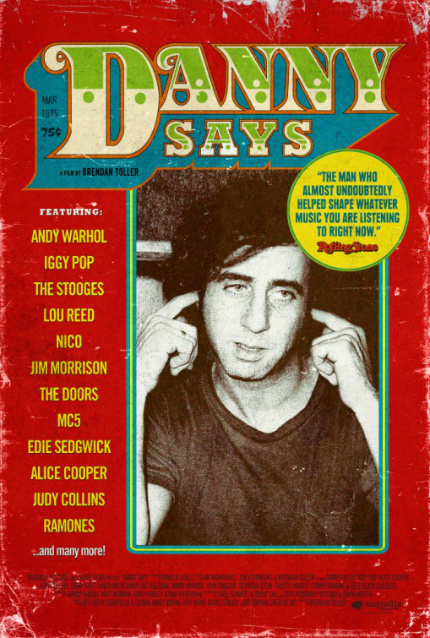 Those words open The Ramones' song "Danny Says," from their woefully under appreciated Phil Spector produced 1980 album, End of the Century. That was what I knew of Danny Fields before seeing Brendan Toller's illuminating documentary Danny Says.

The film traces Fields' roots back to his childhood in Queens, and follows his almost unbelievable journey alongside American pop culture in the late '60s and '70s as he shepherds one incredible movement after another into the limelight during a time in American history that would change everything. You name it, Danny was there, and he was crucial.

Brendan Toller's film is more than just a bunch of talking heads pontificating on the importance of this man who has faded into obscurity, it's essentially an oral history told by the man himself. Over half of Danny Says comes from either a series of contemporary interviews with Fields or the mountains of archival material that Fields has maintained for over 40 years. Yes, we get interviews with the people he helped, but more importantly, we get Danny Fields in full force, and this is not a man who minces words.

Fields' story is almost Forrest Gumpish in its absurd trajectory. Proudly gay before Stonewall, doing drugs before it was cool, hanging out at Andy Warhol's Factory in the mid-late '60s, introducing The Doors, The Stooges, the MC5, and Velvet Underground with Nico to the masses all before the middle of the '70s. Chances are that if you were a teenager or a hippie in America during that time period and you thought something was cool, it was probably because of Danny Fields. To him, though, it was all just to keep himself moving. Like a shark, stagnation meant death, or even worse, becoming uncool, and Fields wasn't having it.

While a huge portion of the film is comprised of these amazingly candid interviews with Fields, who at this point has absolutely nothing to prove to anyone, the volume of luminaries brought in to help tell his story is pretty impressive as well. Interviews with Alice Cooper, Iggy Pop, Wayne Kramer (MC5), executives from Elektra Records and Sire Records, you name it, if they were hip and cutting edge it's because Danny Fields found them and gave them a stage. Which leads me to The Ramones.

Full disclosure, The Ramones are my favorite band. They aren't my favorite band in an "I have all of their albums and posters on my wall", kinda way. They have saved my life on more than one occasion. Yeah, they wrote silly songs about getting high, gay hustling, and the decline of the American family. However, they also wrote songs about love and survival; and while their later catalog is a bit of a minefield, their song I Wanna Live from 1987's Halfway to Sanity is my mantra when times are tough.

Danny Fields heard the Ramones in 1974 and decided that he'd found the band that could change the world, if only the world was smart enough to listen. While the world at large may have only had one ear open to something as aggressive and straight forward as The Ramones ear-splitting three chord assault. Their journey may not have made The Ramones household names, but it certainly sparked something in the hearts and minds of young angry kids around the world, and the punk rock revolution was born. All thanks to Danny Fields.

The film spends the last chunk of its runtime on The Ramones' story, and it's very appropriate since it'll be mostly dimwits like me who seek this film out. What I discovered is that The Ramones weren't an accident, this wasn't the result a freak coincidence in which a guy stumbled onto a seismic shift in popular music. It was fate that this man who had spent his life with his ear to the ground, finally heard something that made him step in.

Danny Says is more than just a remarkable story, it's a wonderfully ebullient film. Whether the story is being told through talking heads, excitable expressionist animation, or stock footage and jaw-dropping snapshots of a man in the middle of a maelstrom of paradigm shifting cultural events, Danny Says is never boring.

Review originally published during the Oak Cliff Film festival in June 2015. The film will open in select U.S. theaters on Friday, September 30.

Do you feel this content is inappropriate or infringes upon your rights? Click here to report it, or see our DMCA policy.
Brendan TollerDanny FieldsDocumentaryJustin BondMx Justin Vivian BondJudy CollinsAlice CooperAnimationBiography