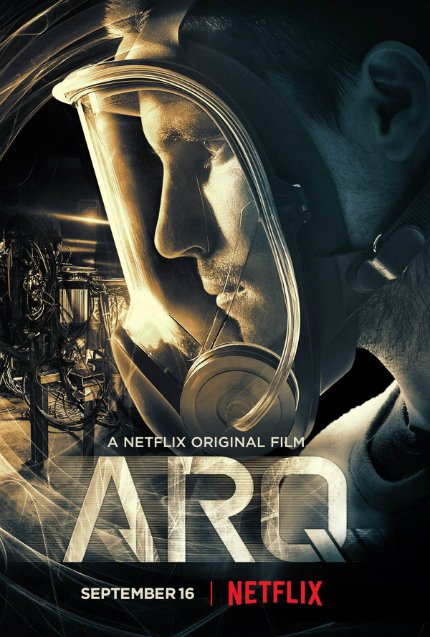 Don't you just hate waking up in the morning and getting smacked around by masked intruders?

That's what happens to poor Robbie Amell in this sci-fi scenario that has more than a whiff of Groundhog Day in the time-looping element. But it's been given a hard shove into dangerous thriller territory. I watched Amell in a multi-episode supporting role on TV's The Flash a while back, and this seems like a good fit for him.

Amell stars opposite Rachael Taylor, who was great as the 666 Park Avenue lead and in a key supporting part in Jessica Jones. So the actors bode well. What about the premise?

Synopsis: In a future where corporations battle against sovereign nations over the last of the world's energy supplies, young engineer Renton and Hannah find themselves attempting to save an experimental energy technology that could end the wars. The catch is, the technology has created a time loop that causes them to relive a deadly home invasion over and over again. They must figure out how to stop the time loop and come out of it alive.

These words have wrapped around the new poster. You can watch the new trailer below. And then make plans for Toronto and/or Netflix.

(Full disclosure: XYZ Films, in which our founder/editor Todd Brown is a partner, produced ARQ. Todd was not involved in the writing or editing of this article.)

Do you feel this content is inappropriate or infringes upon your rights? Click here to report it, or see our DMCA policy.
NetflixRachael TaylorRobbie AmellTony Elliotttoronto 2016