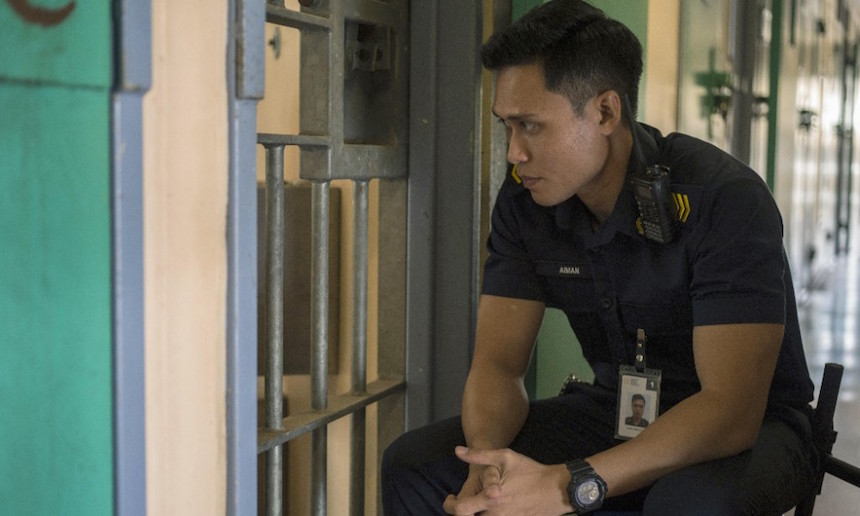 During the introduction of the Japan 1968 film program at this year’s Guanajuato International Film Festival, we saw footage of Oshima Nagisa’s classic Death by Hanging and also the filmmakers’ very direct and bold statement against death penalty. Almost 50 years later this issue remains highly controversial; proof of that is the appearance of a film like Boo Junfeng’s Apprentice as part of the festival’s official competitive section.

This is an important exploration of capital punishment, not from a political point of view, but rather from the perspective of the prison system employees that experience first-hand this particular way of doing justice used in several countries, including Singapore. Rahim (Wan Hanafi Su) is a veteran executioner and eventual mentor of our protagonist Aiman (Fir Rahman), the classic new young man who joins the maximum security prison in a movement that’s much more complex than what it appears at first sight.

Apprentice perfectly understands how the death penalty affects the people involved in ways no regular job could do. What’s inside the troubled mind of a hangman who has been doing the job for several decades? And how is the actual connection with those criminals who know exactly the day on which their lives will end? It’s certainly not an easy task, beyond the inevitable moral dilemmas.

As the drama unfolds, there’s another layer that brings new meaning to the growing relationship between Aiman and the executioner, creating a fascinating situation. In a way, the film can be thought of as a character study seen through the eyes of a couple of innocent persons -- the protagonist and his older sister Suhalia (Mastura Ahmad) -- who nonetheless are marked by crime, due their late father’s obscure past. Their struggle is equivalent to a reformed criminal trying to overcome the past. The sister has completely decided to move on by marrying an Australian man and going with him far away from Singapore. In contrast, by joining the prison system, the brother is actually confronting both his father’s past and his own (he once was a gang member who could have ended in jail).

Little by little, and even in a circumstantial manner at times, he gets closer to the exact moment when his family was forever changed, as well as to the continuous and divisive process that, in the name of the law, decides the fate of murderers, drug dealers or maybe even innocent persons, and their remaining relatives.

Do you feel this content is inappropriate or infringes upon your rights? Click here to report it, or see our DMCA policy.
ApprenticeGIFF 2016Guanajuato International Film Festival