Blu-ray Review: On Criterion, THE MANCHURIAN CANDIDATE Hits Too Close To Home 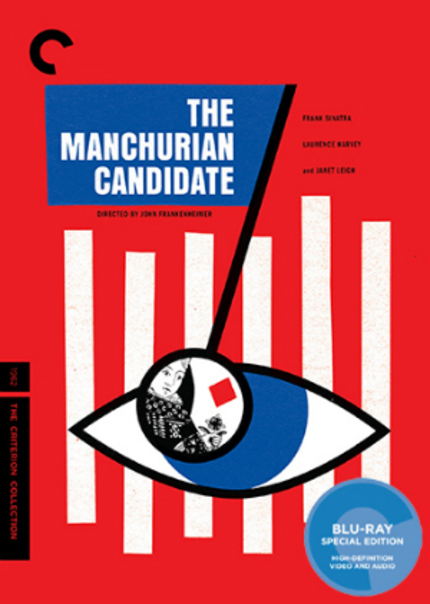 Earlier this year, the Criterion Collection released an edition of John Frankenheimer's classic political suspense thriller, The Manchurian Candidate (1962). Of course I'd seen the film many times prior to this. So many times, in fact, that when I got my copy I watched the extras and never got around to re-watching the film itself. Yet I've been thinking about this re-release ever since. As if some idea about it has been buried in my mind all these years and I've been waiting for the Queen of Hearts. So I watched it again.

You may want to watch it again, or for the first time, before reading further.

Based on Richard Condon's bestselling novel, The Manchurian Candidate is distinguished by the deft way it handles a multi-layered plot involving numerous characters. The end result is so wildly entertaining that viewers could almost be forgiven for mistaking the film as a cinematic pot boiler. I say almost forgiven because at its heart The Manchurian Candidate is so emotionally complex it demands to be seen as more than that. Since its release, every generation has examined the film, trying to determine exactly what it has to say to them.

A group of vets come home from the Korean war. One of them, Major Ben Marco (Frank Sinatra) discovers they're all having the same recurrent nightmare. His investigation leads him to his former Sergeant, and recent Medal of Honor recipient, Raymond Shaw (Lawrence Harvey), a self-absorbed humorless cynic who Marco and his men inexplicably admire.

What no one in the company knows, and their nightmares only hint at, is that their group was captured and brainwashed by the Russians, who have programmed Shaw as a sleeper assassin. Meanwhile, Shaw's return home home is seen as a boon by his scheming mother (Angela Lansbury), who plans to use him and his war hero status as a political stepping stone for his step-father, corrupt U.S. Senator John Iselin (James Gregory). As Marco fights a nervous breakdown and Shaw fights for personal independence, neither is quite aware of the vast conspiracy drawing all the players into place for an attempted coup of the United States.

Just as The Manchurian Candidate released, it was shelved. The rumor was that Sinatra (also the executive producer of the film) was so understandably bothered by the John F. Kennedy assassination he just didn't think it was appropriate to release it at that time. Others claim the film was no longer seen as marketable. It wasn't seen again except for a pair of TV screenings in the mid-sixties and early seventies, respectively. Finally, a showing at the New York Film Festival in 1987 convinced the studio to reacquire the film and make it available on home video.

Throughout its complicated history, the film has been embraced by a wide variety of conspiracy theorists who connected with its use of hypnosis, covert government operations and brainwashing. Criterion's release even features an interview with historian Susan Carruthers about the real-life Cold War era brainwashing scare that reverberated through the American populace following the Korean war. By the time documented evidence of actual attempts at developing brainwashing programs led by the CIA became public, the film was overlaid across myriad grids.

But as I re-watched the film in 2016 I found myself connecting with it in what seems to me an even darker way. It genuinely scared me. If I'm going to attempt to look at the The Manchurian Candidate through the grid of "right now," then it seems like all the stuff about brainwashing and hypnosis and cold war paranoia falls away into the background.

What I'm left with is a disturbing portrait of current American politics that threatens to give me exactly the same sort of nightmares Marco and his men were having. It would be easy enough to draw ham-fisted comparisons between types: Raymond's mother replaced by Hillary Clinton, John Iselin by Donald Trump, etc. But where those comparisons are apt to do less with vast international conspiracies than the film's portrait of human relationships or, better stated, the complete, lack of them. I can't have a meaningful relationship with either one of these candidates, neither do I believe they want one with their constituents.

A lot has been made of the trust-worthiness issues faced by both candidates. Such issues do seem earned. Like Iselin, Trump is an opportunistic demagogue. He doesn't care who or what he tears apart with his outrageous accusations and near criminal rhetoric. Unlike Iselin he seems far less willing to take direction but it all points back to the core of his campaign. He seems to believe he can coast into office based on his entertainment value. He is a boob in a fake politico beard and hat entirely reminiscent of Iselin in his Lincoln get-up. Adding to the strangeness is a popular conspiracy theory that connects Trump and Clinton, suggesting that he launched his campaign specifically to implode so that Clinton could coast to an easy win.

Clinton, on the other hand, seems far too hidden to trust. Does she conjure nightmares about conspiracies? No. She's been investigated for years by her worst enemies who have next to nothing to show for it. But do I think she cares what the majority of the American public wants or thinks? Or will ever tell people what she really thinks? Or even has hard and fast principles that go beyond what she can get funded by big money? Not really. My suspicions about her and the two reigning parties go back to that less than motherly kiss laid on the stupefied Raymond by his mother, though.

That's what I feel like. I feel so worn down by the bastards and all their misinformation and emotional cuing that I just want to stare into space like shell-shocked, hypnotized Raymond Shaw. I feel constantly under the threat of activation rather than empowered by my own free will. I feel punished for caring when all that's required of me is obeying. I feel dirty. I feel incestuous every time I think about voting for president.

I'd like to think that Marco, even after what he was forced to witness, found a way to keep looking, bearing witness to the cost of fake democracy. It's a dirty job these days but perhaps a more realistic one than tearing out all the wires that keep the average American from knowing what really goes on in their government. My own way to keep bearing witness is to vote Clinton, but I just keep thinking someone needs to pull the trigger on the whole damn idea that huge numbers of Americans should have to muster the political will to vote for a better system when the old one has them so beaten down they can barely do more than express their outrage.

Whatever decade it's seen in, The Manchurian Candidate will likely emerge as a masterpiece of pure filmmaking craft. It goes wherever it needs to go to tell its story. Dialogue, cinematography, style of performance, surrealist set pieces and innovative action send the first time viewer all over the aesthetic and emotional map. Hell, there are times when the dialogue is almost entirely composed of non sequiturs.

But that disjointedness, that brokenness reflects the characters' inner turmoil so keenly that the whole thing takes on the air of a tragic tone poem. The Manchurian Candidate is part straightforward political thriller, part horror film and part satire. It even boasts what many believe is the very first use of martial arts in American cinema, a scene in which Sinatra actually broke his hand. But every frame of it fits together like a paranoid's chant.

The previous MGM Blu-ray was awfully good but this one does indeed go it one better. You get a 4k transfer and uncompressed monaural soundtrack. Extras include the ported over; Frankenheimer audio commentary and a featurette consisting of a back patting conversation between Frankenheimer, screenwriter George Axelrod and actor/producer Sinatra.

But there's a lot of new extras as well, including an 11-minute interview with Angela Lansbury, an appreciation of the film by Errol Morris and the aforementioned fascinating interview with historian Susan Carruthers about the Cold War brainwashing scare. My only gripe at all is the continued use of poster style fold-out booklets for the written supplements.

Do you feel this content is inappropriate or infringes upon your rights? Click here to report it, or see our DMCA policy.
Criterion Collectionhome vieoJohn FrankenheimerThe Manchurian Candidate

More about The Manchurian Candidate

It is apparent that THE MANCHURIAN CANDIDATE is indeed a horror film. Based on your good work, I will have to view it again too many years later. Thank your for your hard work David.