70s Rewind: BOUND FOR GLORY Sings the Praises of a True Hero 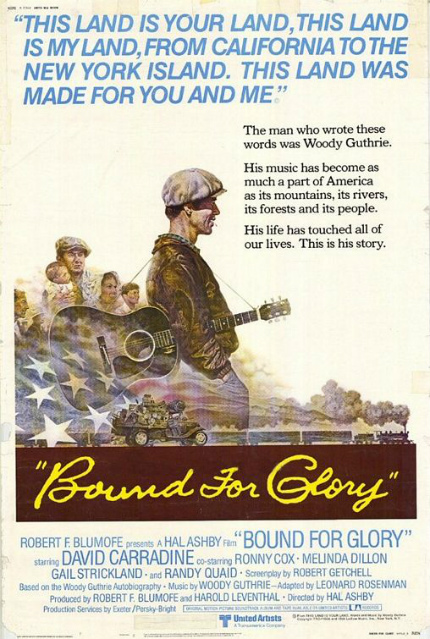 Antiheroes are all the rage these days -- witness Suicide Squad as the latest example -- but what about true, authentic heroes?

Forty years ago, director Hal Ashby presented Woody Guthrie as such a hero in Bound for Glory. Typical of the period, Guthrie was not displayed as some kind of faultless personality. On a dry, dusty, depressing day in small-town Texas, Guthrie makes a sudden decision, jots down a note to his wife, waves goodbye, and heads to California.

Abandoning your wife and two young children to fend for themselves in desperate economic times is not an admirable course. But by that point of the movie, it's hard to see why anyone would stay in Pampa, Texas, a forgotten corner of the world beset by hardships common to everyone in America.

The movie begins in 1936, as the effects of the "Great Depression" had worn down the citizens of Pampa. Guthrie (David Carradine), 24 years of age, struggles to provide for his wife Mary (Melinda Dillon) and their children. He finds work, when he can, as a sign painter, though his creative instincts often clash with local store owners. His real joy comes out when he sings and plays guitar with a group of friends.

One day, Woody decides he's had enough and makes the fateful decision to head west. (It should be noted that his wife's parents and siblings also lived in town, so perhaps he assumed they would look after her.) His long journey to California is filled with hardship and occasional peril, but it will also inform the next phase of his life, when he eventually picks up his guitar again, on his way to becoming a folk hero for the ages.

In modern parlance, we might call the movie an origin story, since so much of it takes place before Guthrie became known to the public. Robert Getchell, who'd been Oscar-nominated for his first produced script, Alice Doesn't Live Here Anymore, earned another Academy nod for his screenplay, based on Guthrie's autobiography. It follows a loose narrative arc, not quite rags to riches but something like that, as Guthrie gradually comes to realize what really makes him happy.

For director Ashby, the movie represented an opportunity to again take hold of a story and impose his own vision upon it. After The Last Detail (which I covered here), Ashby moved on to Shampoo, but ended up "like an office boy" under the control of producer/star Warren Beatty and writer Robert Towne, according to cinematographer Haskell Wexler, quoted in Peter Biskind's book Easy Riders, Raging Bulls.

Ashby moved quickly from that experience to Bound for Glory, and Biskind's book recounts the director's more confrontational approach. Reportedly, the scheduled 70 days of production ballooned to 118 days, and the budget nearly doubled, from $4 million to $7 million. Ashby's mood swings grew more violent, perhaps attributed to his increasing use of drugs, and one day he fired Wexler. The cinematographer, who'd known Ashby for years, says he "chewed him out for being a doper, and he backed off."

Carradine was already in his late thirties when production began, but he imbued Guthrie with a quiet, charming grace, humble and yet increasingly aware of himself, his times, and his fellow man. The actor had raised his profile in the early 1970s via his starring role in TV's Kung Fu and he then attempted to reignite his movie career, taking a starring role in Death Race 2000, released the year before Bound for Glory.

His performance earned him critical accolades and he moved onward to high points like Ingmar Bergman's The Serpent's Egg, Richard Moore's Circle of Iron, Walter Hill's The Long Riders, and Larry Cohen's Q (really!) before falling out of favor. He remained busy, however, and was boosted by his memorable appearance in Quentin Tarantino's Kill Bill in the years before he died in 2009. 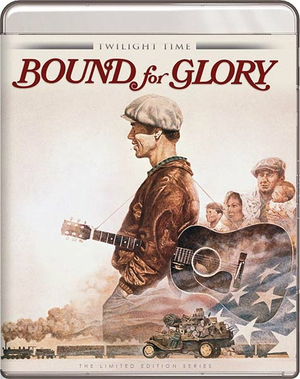 Released in the U.S. in early December 1976, two weeks after Rocky and opposite Silver Streak, the film was not a big box office success, but it earned seven Academy Award nominations, including Best Picture, and won two, for Haskell Wexler's cinematography and Leonard Rosenman's musical score, which adapted songs by Guthrie and other period musicians. Ashby moved on to Coming Home.

Bound for Glory was released on Blu-ray in a limited edition earlier this year by Twilight Time. Wexler's photography establishes the gloomy mood in the early scenes, a bleak scenario of muted colors and dust, always dust. Slightly brighter colors are added on Guthrie's journey to California, though it's quite a while before luxurious green makes itself known. Beyond that marvelous palette captured by Wexler, the movie is buoyed by its performances, not only Carradine but also understated turns by Ronny Cox, Gail Strickland and Randy Quaid.

The true life of the movie, of course, arises from Guthrie's songs, which are proud protests, proclaiming the joys of living while also demanding the rights that should be equal to all people. All these elements together make the movie required viewing.

70s Rewind is an occasional column on the writer's favorite movie decade.

Do you feel this content is inappropriate or infringes upon your rights? Click here to report it, or see our DMCA policy.
70s RewindBound for GloryDavid CarradineHal AshbyRonny CoxWoody Guthrie