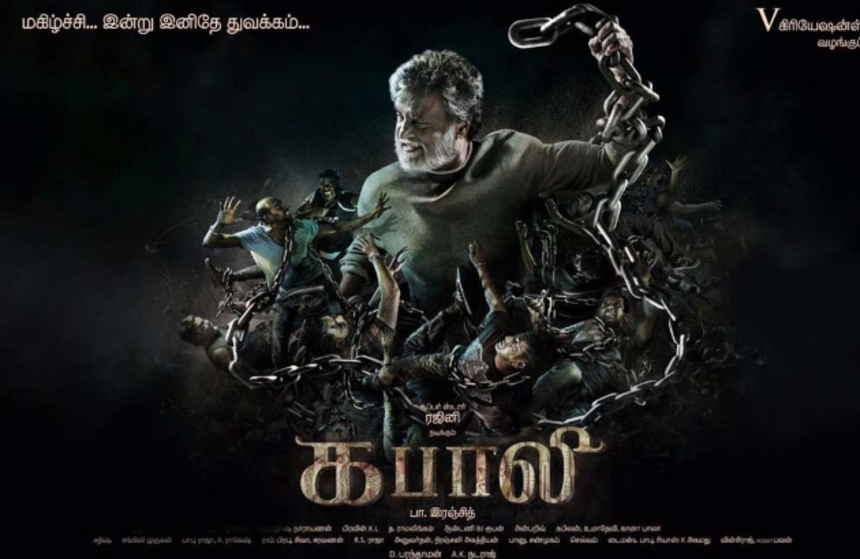 For millions of people around the world, the release of a new film from Tamil actor Rajinikanth is more than just a movie, it's an event. Superstar Rajinikanth is a performer whose mere mention inspires near-religious worship.

Unfortunately, this has come at a price to his career over the last five years. Rajini's latest film, Kabali, is the follow up to a critical and box office duds that have left his fans wondering where their Superstar went. However, this time around he's back with a vengeance and Kabali is Rajinikanth's most enjoyable film in years.

After 25 years in a Malaysian prison, revolutionary gang boss Kabali (Rajinikanth) is released into a world that has moved on without him. He was put in jail through the machinations of a ruthless gang leader named Tony Lee (Winston Chao) who usurped Kabali's power through a vicious massacre that took the lives of our hero's family and left him with nothing but his rage to keep him warm.

Upon his release, Kabali sets out to even the scales with a targeted massacre of his own, eliminating Tony's grunts and enforcers on his way to deal with their master. The closer he gets to Tony Lee, the more twisted the tale becomes as revelations unveil more and more of the truth behind the massacre that put Kabali in jail. Kabali will have his vengeance, but is it enough to finally let him sleep in safety?

What is most noticeable about Kabali on first blush is that this is a world in which we haven't seen Susperstar Rajinikanth exist for a long time. Director Pa. Ranjith crafted a Malaysian underworld that feels fairly close to what I imagine a real gang war might look like.

Over the course of the last decade, Rajinikanth transitioned from actor to icon in a way that provided him very few opportunities to display his acting chops. The self-awareness of his last five films took from the audience the expectation that Rajinikanth deliver a credible performance and replaced it with howling hero worship. While that is all fine and good, and several of his films over the last decade - Enthiran, Chandramukhi, and Sivaji especially - have been quite enjoyable, it was always on their own terms.

Rajinikanth became a brand, a cartoonish film hero onto which the Tamil film audience could project their own insecurities and fears. Everyone loves a bit of escapism from time to time, but many of the resulting films became lazy exercises in showcasing Rajinikanth as a totem rather than an actor.

It's been a long 40 years for Rajinikanth in creating this image of the man who can do no wrong and whose morals are impeccable; the man who fights for what is right against all comers. However, when you look at the decline in the quality of the films, specifically his last two efforts Kochadaiyaan and Lingaa, it became clear that many producers felt that nothing more was required of Rajini than for him to appear on screen in order to drain the wallets of the Tamil faithful.

As someone much more wise than I once said, it isn't how many times you fall down that counts, it's how many times you get back up. For all of the critical and box office beatdown that Rajini has endured since his worldwide breakout in Enthiran, all it took to wake him from the doldrums was the fresh new voice of young writer/director Pa. Ranjith. Ranjith pays tribute to Rajini's status as an icon without allowing it to narrate his story for him. Kabali is certainly a Rajinikanth film, but it's unlike anything fans have seen in a while.

Less a celebration of Rajinikanth's status than a gangster film with a strong central character, Kabali is the grittiest Rajini film in a long time. Ranjith diverges from the mainstream masala that has been Rajini's bread and butter and instead tries to use him and his unrelenting charisma as the anchor for a crime film that borrows more from Hong Kong heroic bloodshed than it does from Kollywood blockbusters.

That's not to say that Kabali is as iconoclastic as some of the gangster films coming from Tamil Nadu these days. It stops just short of transgressive and settles in nicely as a well thought out, straightforward thriller, albeit with a larger than life performance from its lead.

Kabali treads some dangerous ground that many Indian films have marched in the past. It is very easy for a film about an Indian character in a foreign land to descend into racist diatribes and caricatures, it's been done too many times to count. It would have been easy for Ranjith to have written Kabali's Malaysian/Chinese villains with a very broad brush and gotten away with it. The Tamil immigrant community in Malaysia is notorious poorly treated and used a cheap labor for the indigenous population. However, Kabali neatly avoids unnecessary troubles by writing each of its characters, hero and villain alike, as individuals responsible for their own behavior.

Tamils and Malay alike are written as both heroes and villains. It isn't the Malaysian people who are the bad guys, it is those who specifically attempt to exploit Tamil labor. After having seen dozens of films in which foreigners are written as stereotypical villains to the Indian people, it was with great pleasure that I was able to walk out of Kabali without that complaint. Winston Chao, the lead antagonist, isn't a villain because he isn't Tamil, he's a villain because he's an asshole, and that's a breath of fresh air.

Superstar Rajinikanth may be the center of attention - and literally the center of each frame of film that he's in - but he's not the only character that makes Kabali work. Of all of the ancillary characters in the film, only one commands the frame with equal facility to Rajinikanth, and it is his love interest Kumudhavalli, played by rising star actress Radhika Apte.

Apte doesn't get a whole lot of screen time or a lot of lines, but she makes each second that she gets in the spotlight work for her, and in turn lends credibility to Rajini's Kabali. Apte exudes a quiet strength and authority that draws the audience in and makes us believe that she could tame the wild-eyed and rowdy Kabali. Apte is India's next great acting export, and I wouldn't be shocked one bit to see her at the Oscar podium before her career is through.

Kabali is an unusual film in Rajinikanth's recent career. It is unlikely to bring him any great acclaim from foreign viewers. It won't break through to the international market in the way that his bonkers performance in Shankar's Enthiran (Robot) did. It doesn't trade on his superhuman celebrity status in any tangible way outside of the marketing.

What it does is provide him with an opening to show the world what he's got, and he's surprisingly effective. After years of allowing his dramatic muscles to atrophy in favor of spectacle, Rajini shows that he can still perform at a level befitting a legend of Indian cinema.

He is still not the world's greatest actor, and Ranjith still manages to squeeze in a few moments of unneccesary self-awareness, but Kabali shows that Rajini isn't an icon for nothing. This is one of the bloodiest and most viscerally violent movies of Rajinikanth's career, and it's a solid win.

Non-fans will likely cock their heads at the overabundance of slow-motion walking scenes and onomatopoeic sound effects that accompany Rajini's every move, but I have no doubt that the vast majority will just see a solid gangster film that is a lot less kitschy than they are expecting. Kabali is a step in the right direction for Rajinikanth; let's just hope he keeps on walking.

Do you feel this content is inappropriate or infringes upon your rights? Click here to report it, or see our DMCA policy.
IndiaRajinikanthPa. RanjithWinston ChaoRadhika ApteDhansikaActionCrimeDrama