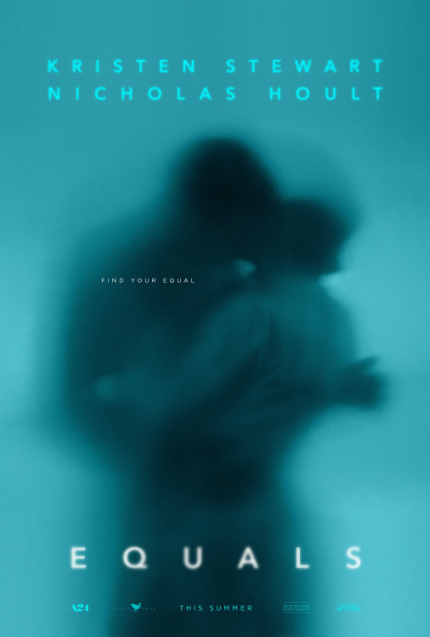 In the future envisioned in Equals, it is as if Jony Ive ended debates on industrial design and all we are left with is Apple monoculture.

Everything is white and smooth surfaced. The architecture is soothingly clean concrete. The film opens with a shot of a bedroom set sliding seamlessly into a hidden wall-space; out of sight when not in use. War, poverty and nearly all human imperfections were eliminated long ago for the mere cost of engineering any and all emotion and sexual desire out of the species. What remains are efficient, tranquil workers, passive and obedient. But something is wrong...

If you are a lover of science fiction films, Equals will be sounding quite familiar at this point. There is a long tradition of the idea featured here in the history of pop cinema and literature, from the big dumb action of The Island and Equilibrium, to George Lucas' cooler ideological THX-1138, and really all the way back to George Orwell's seminal novel Nineteen Eighty-Four.
It is good happenstance that Ridley Scott, who famously re-purposed the iconography of Orwell for Apple Inc. as a TV advertisement to launch their Macintosh computer, acts as the producer on the film. On a smaller scale than the typical Scott picture, director Drake Doremus, also taking a page from Spike Jonze, delivers a high concept but still very much commercial movie. Infused with tenderness, he tells the story through body language and tiny gestures as the characters are dwarfed by both technology and architectural spaces.
Any Orwellian realpolitik or spectacular action set-pieces are traded in for intimacy and tactile immediacy. A worthy goal for this kind of film, but somehow, it is rarely achieved. The primary focus here, this makes Equals stand out in its own quiet way, with the added benefit of being shot on locations in Japan and Singapore that were mainly designed by architect Tadao Ando. It is astonishing how much real spaces lend a realism birthed of constrained artistic challenges seen less and less in our CGI and green-screen era.
Silas and Nia, played by Kristen Stewart and Nicolas Hoult, respectively, are white collar (quite literally) workers for the news and media branch of the Atmos company, a world-spanning corporation (perhaps the only one) whose focus is resolutely on pushing humanity to explore the stars. Any exploration of innerspace has been thrown on the dust-pile of history long ago.
Nia writes the corporate press releases, and Silas draws the images to accompany them. Their gigantic work tablets sound off with soothing chimes when each of their workaday micro-tasks are complete. They go to sedate meetings or eat their designer cafeteria dispensed meals in a fashion that is politely cooperative and passively isolated. The cinematography favours shallow focus with whites as crisp as the company uniforms.
After a co-worker inexplicably suicides, reports surface of a new condition the authorities are calling S.O.S., or Switched On Syndrome. Decades of blocking the genes responsible for emotion and sexuality, but it seems life has found a way. Classified as a disease with divided into Stages 1 through 4, the first two are suppressed with medication. People are encouraged to self medicate and police their fellow citizens for symptoms.
Those in the latter stages, are shipped off to the "The Den," a kind of quarantine-slash-sanatorium where nobody hears (or wants to hear) what happens to them after that. Of course, there is not much concern about this draconian practice, because hey, no emotions! Although, suicide is gently encouraged and a couple co-workers hide their coffee mugs with concerns of contagion.
When Silas contracts S.O.S and begins company treatment he discovers that Nia has been hiding her own affliction with it for some time. The film allows both time and space for their tentative entry new emotional states and sexual desire. Gentle touching eventually goes where it is going to go, and colour begins to seep into their space by way of experimental cinematography ideas.
Both young stars essay this awakening with a complex blend of tender discovery, lust, and cold sweat. Hoult's star has been rising at light-speed since Mad Max: Fury Road earlier this year, but can we now put to bed any further comments about Stewart's red-carpet disinterest or YA typecasting? She was great before Twilight (Into The Wild and Panic Room) and has been great after Twilight (Clouds of Sils Maria, Still Alice). And she is great here. Together their virginal Romeo and Juliet vibe is both believable and compelling.
As the danger of discovery mounts and the couple attempt to flea, Guy Pearce and Jacki Weaver make brief (and welcome) appearances as the film begins to resemble, more than anything else, Logan's Run. Hollywood has been trying to get a remake of the 1970s post-hippie classic off the ground for decades, and here we have Drake Doremus, with the help of Ridley Scott, slyly delivering exactly that for the Apple loving Millennial generation.
Review originally published during the Toronto International Film Festival in September 2015. The film will open in North American theaters on Friday, July 15.