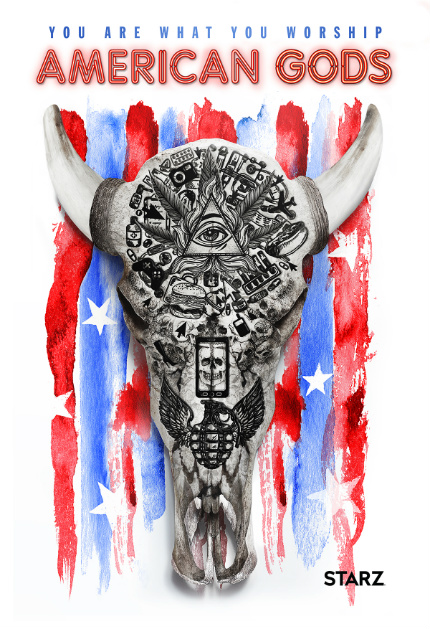 Coming into awareness as a fantasy writer, his magnum opus is a series of graphic novels about Dream, one of the Endless, also known as The Sandman, which he penned for Vertigo. Gaiman, no stranger to either the small nor big screen, created the darker urban fantasy series Neverwhere for BBC Two, which later was turned into a novel under the same title. With the current boom of television production, it would be a sin to omit one of the beloved fantasy authors.

The premium network Starz ordered the adaptation of Gaiman´s bestselling novel American Gods, a project rumored to be in development since 2011. The first trailer has now been released.

Partly inspired by his work on The Sandman series, the author wrote a timely novel about old gods from various mythologies, such as Odin, Czernobog, and Anubis, being replaced by new gods of money, technologies, media or stock markets, reflecting the obsessions of the nation. The novel's protagonist Shadow Moon, a recently widowed ex-convict, starts running errands for mysterious Mr. Wednesday. Shadow soon realizes the oddness of Mr. Wednesday's acquaintances, eventually finding himself in a war.

Bryan Fuller, who is also busy preparing the television comeback of Star Trek and before that did the Hannibal adaptation, and Michael Green, the writer of the eagerly anticipated Blade Runner sequel and Alien: The Covenant, developed the series. Both serve as showrunners and head writers with Gaiman´s active contribution. Ricky Whittle of the British soap opera Hollyoaks will assist Ian McShane in bringing the almost forgotten gods to confront the new generations of modern deities. Gillian Anderson will make an appearance under the banner of the new breed as Media and Kristin Chenoweth on the opposite side of the barricade in the role of Easter, the Germanic goddess of the dawn.

Gaiman revealed that the series will tackle the first third of the book, adding that the novel´s narrative arc should unspool over the course of three seasons. The author himself reminded fans of changes to come, one of the major ones being the expansion of the narrator's perspective. Whereas in the book, the story is told through the eyes of Shadow, the series adapts several voices, leading to filling out some blank spaces in the book.

Gaiman already has another television project up his sleeve, another novel-to-small-screen, Good Omens, which he co-wrote with the creator of the Discworld universe, Terry Pratchett. The six one-hour episodes should roll out in 2018.

American Gods will premiere in January 2017 on Starz.