“Come, spirit, help us sing the story of our land. You are our mother. We, your field of corn. We rise from out of the soul of you.”

The wind blows. The crickets gently chirp. The grass crunches ever subtly beneath your feet.

The green of the leaves, the rippling of the water, the drift of the clouds. The whisper of your own poetic thoughts. 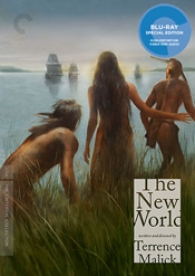 This is the unique and altogether enveloping world of Terrence Malick's tale of love, understanding, warfare and strife that came with the clash of cultures in what would be Virginia, circa 1607. The story of Captain John Smith (a commandingly vulnerable Colin Farrell) and Pocahontas (an expressively radiant Q'orianka Kilcher) is a matter of historic legend, having been told and retold in wildly varying permutations.

While the detailed reality of Pocahontas and Smith's relationship remains unknown, the oft-defaulted version of “forbidden love story” has proven to be the myth-made-fact. It is this version that Malick appropriates and runs with. Interestingly, the famous moment in which she throws herself upon him to supposedly spare him life, is not shown, only mentioned a moment later. (“At the moment I was to die she threw herself upon me.”)

Pocahontas, as played so empathically by fourteen-year-old newcomer Kilcher, never verbally identified as such in the film itself, is Malick's very embodiment of native innocence and free-spiritedness. If historical figures who live lives of pained love and tragedy could be manic pixie dream girls, Kilcher's barefooted princess certainly has her moments. She is the subject of most of Malick's trademark indulgences: A hand brushing across wild wheat, magic hour frolics in the field, whispered voice-over. But of course, there's more than enough whispered voice-over to go around. This, only Malick's fourth film, is where the voice-over turns the corner into steadfast and blatant spiritual inner-monologue and prayer. She addressing "Mother" nature, John Smith and then John Rolfe communing with the Christian God. The implication is that they speak to the same ends.

The New World, however one approaches it, is nothing short of a masterpiece in a unique career full of masterpieces. It is nothing short of a trip back in time, told that 24 postcards per second. Malick's quick cuts and dreamlike flashes demonstrate an already unconventional filmmaker moving further into what would become his current impressionistic mode of storytelling.

This is a movie that seems to affect all senses, even at home, on blu-ray. We vividly see it and hear it, but inexplicably, we seem to feel it, even taste it. Nothing looks or feels like the The New World. That is, with the exception of 2015's Alejandro G. Iñárritu's The Revenant. That film shares this one's cinematographer and production designer, but trades its exploratory humanity and love for a lunky philosophical revenge motive. The New World, by contrast, is all about the painful reality and the glorious dream of discovery.

As we share the point of view with the natives for the arrival of the massive European ships, the thought occurs that such a sight that must've been akin to witnessing an alien spacecraft landing. Similarly, later, the looks of unease and disgust on the faces of the voluntarily displaced wealthy white settlers, drifting about in their fancy clothes within the confines of the rain soaked mud-hole that is the Jamestown colony, is palpable. When they introduce gunpowder blasts to said natives, first as friendly demonstration then later as assault, it is an affectingly jarring affair in any case. The blasts rattle all things.

Early on, we have a simple title card, the first of several throughout, white letters on black: "A New Start". Immediate cut to Smith bound and about to be hanged. Irony? Only for a fleeting moment. "Let him go", commands leader Christopher Plummer. The apparently mutinous Smith is then given an ultimatum, and is set free to take part in his historic, fictionalized love story of yore. He will delight in Pocahontas many times over, and breaking her heart at least twice. Later, Christian Bale's good man John Rolfe, and the audience with him, will struggle to compete with the memory of Farrell's Captain Smith.

Is this a tragic love story of epic proportions, or an epic love story of tragic proportions? I suppose that depends on which version of the film you watch. Criterion, to the great delight of fans of this masterwork, offers no less than three separate cuts of The New World on this exquisite three-disc blu-ray set.

Centrally featured is the 4K restored version of Malick's 172 minute extended cut, originally created for a separate DVD release a few years after the theatrical cut debuted. This version of The New World, properly displayed, makes an already immaculate film all the more pristine; offering stunning you-are-there clarity. Emmanuel Lubieski's cinematography, nor Jack Fisk's authentically rustic production design (Jamestown build not only as it was, but likely how it was), has never looked finer. The extended cut is where Malick's sense-memory aesthetic and environmental immersion truly shine.

It is the 135 minute theatrical cut that first wooed audiences in late 2005. It was this cut that prompted me, despite not naming it as my top film of that year, stayed with me to the point of naming it my #4 of the decade five years later. It holds up beautifully alongside the other versions, a leaner, less fragmentary telling of the same story. Finally, there is the 150 minute original cut, the version that played the premiere and its earlier screenings. Interestingly, the shorter versions don't simply consolidate and eliminate – there are moments in the theatrical not seen in the extended version. All are presented with 5.1 surround DTS-HD Master Audio soundtracks.

In a terrific hour and 20 minute Making “The New World”, we witness the transformation of a ragtag group of native American extras into highly convincing 17th century Indian natives. The piece is such a fluid and informative look at the process of making the film that one scarcely notices its lack of director Malick, that notoriously camera-shy recluse. This was shot in 2004 during principle photography.

Additionally, there's a newly video program about making the film, in which producer Sarah Green, costume designer Jacqueline West, and Jack Fisk get into the nuts and bolts of making a Terrence Malick period film. There are too many fascinating details to keep count of.

Also found throughout the set are a pair of newly recorded interviews with Fisk, detailing his process in creating the locations that were so key in Malick's process, and Kilcher, discussing her experiences of acting in the film. There are short examinations of the editing of the film, speaking with one of the editors about the three different versions. And of course, there are trailers for The New World.

The package housing the three discs is a cardboard slipcase (the extended cut on disc 1 sits on the left, the other two discs, one version per, gently overlapping on the right), adorned with beautifully painted images that evoke the classical majesty of the film. Inside there is a booklet filled with contextualizing essays, and historic artwork that served as guiding inspiration in the making of the movie.

Just as Malick created an immersive reality for his actors and, by turn, the viewer, so too has Criterion done so in their top tier handling of this set. This set is, without question, in the running for their finest single-title release of the year. The New World, whichever version you prefer, is worthy of discovery on Blu-ray.

Do you feel this content is inappropriate or infringes upon your rights? Click here to report it, or see our DMCA policy.
Colin FarrellCriterion CollectionTerrence MalickThe New World

More about The New World