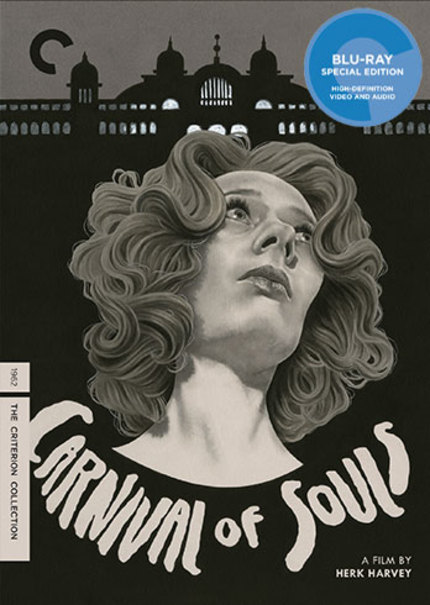 Herk Harvey's Carnival of Souls is a weird little movie.

Made in 1962 for about $30,000, Carnival of Souls is one of the creepiest films of the early '60s, and not entirely on purpose. The film was shot by Harvey and produced by the team at the Centron Corporation, a company based in Lawrence, Kansas that focused on industrial and educational films.

The story was that Harvey had driven past the abandoned Saltair Resort outside of Salt Lake City, Utah was was creeped out enough to realize that it would be a great setting for a horror film. He and co-worker John Clifford started writing and not too long ofter, they had a script that would become one of the great unheralded cult classic films of the '60s.

Carnival of Souls begins with a drag race, a staple of the late '50s drag racing films, and in this case the race goes sideways and one of the cars takes a dive off a bridge, apparently killing everyone inside except for Mary Henry (Candace Hilligoss). Unable and unwilling to deal with the tragedy of losing her friends at home, Mary runs away and takes a job as the church organist in another city.

On her way to her new home she passes an abandoned fairground which holds an unusual sway over her and she tries to find a way to sate her curiosity by asking the pastor at her church for a tour. He refuses, but Mary won't be dissuaded and the closer she gets to the fairground, the further she steps away from sanity as the titular carnival holds more sinister secrets than she could have imagined.

The setup and plot for Carnival of Souls are both rock solid. The idea of a woman running away from tragedy to start a new life is a great place to begin, and in fact much of the opening mirrors that of Alfred Hitchcock's Psycho from a couple of years before. Where the film runs into a bit of trouble is in the practical execution of the story. Harvey and the Centron team weren't in the habit of making feature films, and as such they had not only a challenging budget to work with, but also a very limited pool of performers to choose from, and it shows.

A cursory glance at the IMDb pages of the cast of Carnival of Souls shows that none of the principal cast made it beyond five or six films, and only Hilligoss had any prior experience. The result is not so much a case of bad acting ruining the film, but of truly awkward acting choices and direction creating a haze of unease around the entire proceedings.

Throughout the film we are challenged to figure out what is going on in this world along with Mary. She goes in and out of consciousness, not only her own, but also the consciousness of those around her, without much rhyme or reason. Everyone she meets seems just a little bit off, which is a fortunate, and I'm guessing unintentional, side effect of the lack of experience on the set. Whatever the reason, it makes everything feel quite surreal.

Even though the film feels like it should fit next to similar low budget horror projects, the films of the time don't quite match up with Carnival of Souls thematically. There were plenty of monster movies and atomic age nightmares hitting the screens at the time, but this is a more atmospheric film, full of dread and uncertainty. While it may seem a stretch, one of the most apt comparisons I can draw is with Alain Resnais' famous mind-bender Last Year at Marienbad, in which a woman battles with her own recollections of events that may or may not have happened.

In the end Carnival of Souls is a puzzle, and even though it isn't particularly elegant, it is certainly worth checking out for anyone who hasn't yet.

Criterion does a typically stupendous job with this Blu-ray upgrade of Carnival of Souls, which was one of the first batch of films the company released over 16 years ago. The new HD transfer is gorgeous, with the vast majority of damage gone and wonderful stability of the black and white image. The audio is similarly clean and effective, with a lossless mono track that supports the dialogue and wonderful pipe organ score beautifully.

In terms of extras, there's good news and bad news for fans of the film. First the good news; we get a couple of new features that were not present on the older disc. One is an appreciation of the film from comedian and movie lover Dana Gould. From the interview, it's clear that he is a fan and he knows his stuff. He isn't an expert, but his enthusiasm is charming. Next is a new David Cairns video essay that brings together lots of footage and interview audio from numerous film experts to talk about the importance of Carnival of Souls.

Returning to this disc from the previous DVD release are tons of bonus features, including a scene-specific commentary from the director, a TV special covering a 1999 cast reunion, a 2000 update of the locations the film used in Lawrence, Kansas, and a TV special that covers the history of the Saltair Palace. What's missing on this edition is the director's cut that features an additional five minutes. Those of you completists out there might want to hold on to your DVD for that.

Rounding out the extras is an essay from film programmer and author Kier-La Janisse (House of Psychotic Women) that covers many aspects of the film from the psychological approach to Mary Henry to the basic background details regarding the film's genesis. It's wonderfully well-written and scholarly; I just wish Criterion would spring for staples and put their essays in a booklet instead of the fold outs they've turned to.

I've now seen Carnival of Souls a half dozen times, and it never gets less creepy. This new Criterion Blu-ray is definitely the way to go; it's beautiful and packed with context to help you make sense of the bizarre experience both before and after watching. Recommended.

Do you feel this content is inappropriate or infringes upon your rights? Click here to report it, or see our DMCA policy.
blu-raycarnival of soulscriterionherk harvey

More about Carnival of Souls