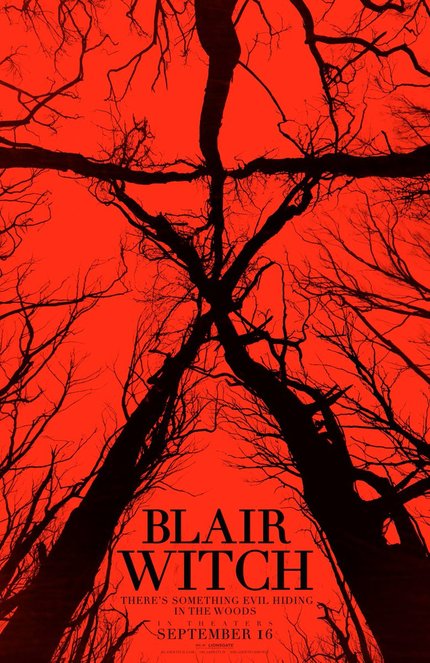 In this day and age when everyone seems to know everything way far in advance any amount of true surprise in the film world is, well, surprising. And rare. And so the simple fact that Lionsgate and director Adam Wingard managed to completely blindside the crowd at San Diego Comic Con by revealing that Wingard's upcoming horror picture The Woods was actually a super secretive sequel to The Blair Witch Project titled simply Blair Witch, that alone was a significant win. Throw in the fact that the film itself is - by all accounts - very very good and, hey, it would appear that one of the original viral phenomenons is getting itself a proper revival.

It’s been 20 years since James’s sister and her two friends vanished into the Black Hills Forest in Maryland while researching the legend of the Blair Witch, leaving a trail of theories and suspicions in their wake. James (James Allen McCune of TV’s SHAMELESS) and his friends Peter (WRECK-IT RALPH’S Brandon Scott), Ashley (Corbin Reid of TV’s DISNEY STAR DARLINGS) and film student Lisa (Callie Hernandez of upcoming LA LA LAND and Ridley Scott’s upcoming ALIEN: COVENANT) venture into the same woods each with a camera to uncover the mysteries surrounding their disappearance. At first the group is hopeful, especially when a pair of locals Lane (Wes Robinson of TV’s STATE OF AFFAIRS) and Talia (Valorie Curry of TV’s THE FOLLOWING) offer to act as guides through the dark and winding woods. But as the endless night wears on, the group is visited by a menacing presence. Slowly, they begin to realise the legend is all too real and more sinister than they could have imagined.

And now for those wanting a taste of wait may lie lurking off in the woods comes the first trailer for the film. What say you old time fans? Does this live up to the original?

Do you feel this content is inappropriate or infringes upon your rights? Click here to report it, or see our DMCA policy.
adam wingardblair witchhorrorthe woodstrailer