Review: THREE, Johnnie To Gets His Gun Back 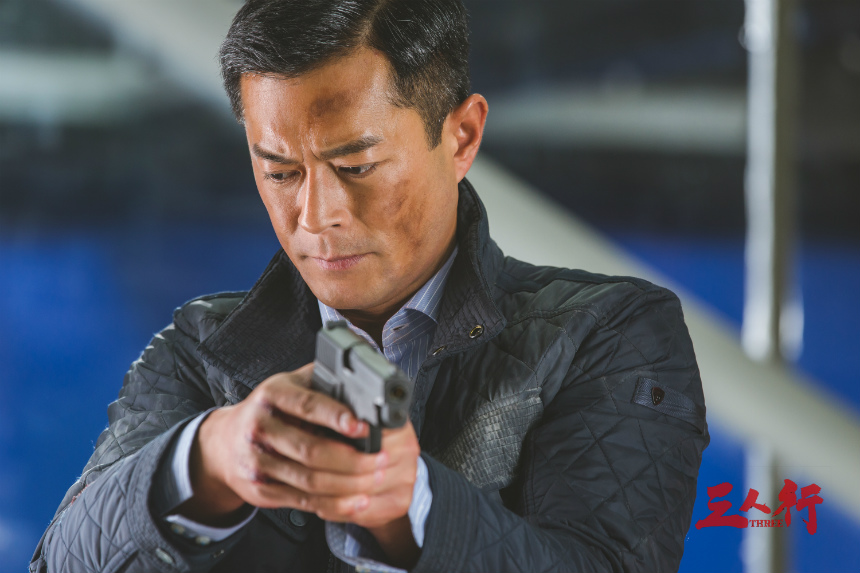 Things are going south in a Hong Kong hospital when a criminal (Wallace Chung), hit by a bullet in the head, is brought for an urgent operation but refuses treatment. Tension rises between a tough cop (Louis Koo) and an ethical yet troubled surgeon (Zhao Wei) when they must decide how to handle the problem. Taking advantage of the situation, the thug will do his best to gain time so that his pals can break him out.

Given the concept and the filmmaker, is it clear that the viewers are in for a treat. Using the closed premises of a hospital, Johnnie To is back to what he does best: in a handful of scenes, the Hong Kong director skillfully sets up the highly tensed situation on which the whole film will be built. From the way the characters and the furniture are displayed within the frame to the chronological events that are slowly unveiling, everything is precisely calculated. To's masterful set-up quickly transforms Three into a filmic ticking bomb, the audience knowing very well that everything can happen at all times.

This construction obviously leads to a resolution that calls for bravura filmmaking, which To confidently delivers. But what starts as one of the director's most impressive single takes ends up being rather disappointing. The high reliance on tricks and (special) effects somehow defuses the ambition of such a take, which becomes even worse during the final sequence. Three's over-the-top and sadly anti-climatic - the viewer's suspension of disbelief is literally tested - finale is rather surprising for To, and would have been much more bombastic in the hands of other Hong Kong directors such as Tsui Hark. Aside from the obvious filmmaking qualities, the film relies a lot on its trio of actors, who portray their characters very convincingly. Their opposed personalities bring playful contrasts that adds depth to the conflicted situation. Koo's stressed out and cynical cop perfectly counterbalances Zhao's exhausted but high-principled surgeon.

As far as Chung's character is concerned, he's far from being uninteresting but falls into the intellectual, prototypical bad guy and ends up being quite annoying or worse, lacking credibility. Suffering from logorrhea, he proves to be extremely pedantic and over reliant on quotes from various intellectuals, spoiling the fun rather than creating it.

Another crowd-pleasing feature that eventually fizzles out is the side characters. Some of them are so detached from the main narratives that they almost seem to belong to another film - a feeling emphasized by the places where these subplots take place, exclusively devoted to them. Of course, Hong Kong cinema is known for its hybridity and its capacity to shift from one tone to its extreme opposite - and all this can easily happen in the blink of an eye - but here all the comic relieves don't fit the overall story-telling. Even though I personally love this actor and his clownish facet, Lam Suet goofily wanders through the outskirts of the hospital, damaging the pace of a film that was beautifully developed.

Another surprising element of To's film is how apolitical it is. Not that the filmmaker has always been displaying political content in his work - there's quite a gap between Election and Don't Go Breaking My Heart - but since the dramatic events that recently shook Hong Kong, strong activism has pervaded recent films, as in Fire Lee's Robbery, indie omnibus Ten Years, Herman Yau's The Mobfathers and To's own production Trivisa.

I'm not saying that all contemporary Hong Kong productions should have a political standpoint. However, taking the current context into consideration, it feels almost weird that Three doesn't bring it up, especially as most of the themes tackled in the film could have easily converged toward the political symbolism that Hong Kong cinema is so fond of. Undoubtedly, the reason for such a carefree treatment comes from the Chinese co-production.

While it feels like To can finally take a breath after his previous efforts, Three doesn't entirely keep its promises. The stylistic exercise is certainly enjoyable, especially during its first half, but shows its limits with its uneven script and unsatisfying finale. Drug War has yet to be outdone.

Do you feel this content is inappropriate or infringes upon your rights? Click here to report it, or see our DMCA policy.
ChinaHong KongJohnnie ToLam SuetLouis KooReviewThreeWallace ChungZhao Wei

More about Three (Johnnie To)