Review: SWISS ARMY MAN, A Film Unlike Any Other 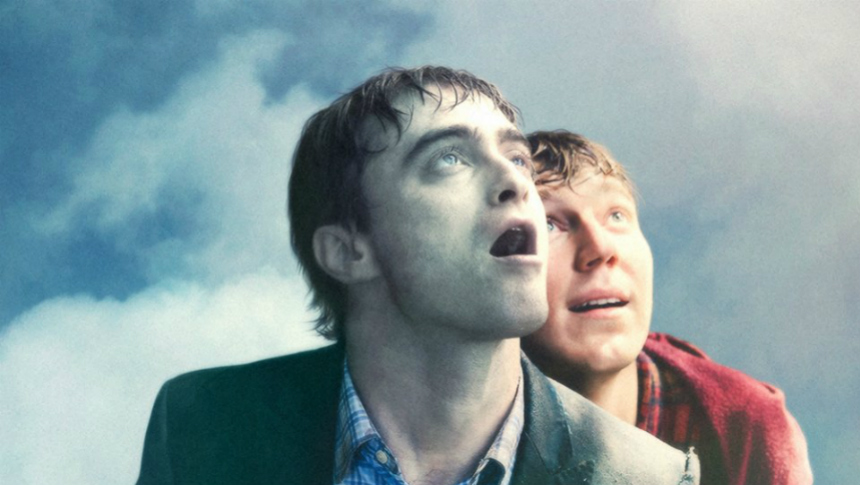 What do you want from the world of independent cinema? Well, ideally you'd like a story told without the overt constraints of market, where filmmakers can tell a tale to a wide enough audience that appreciates without sacrificing to the squishy middle. Often these works lean towards the personal, resulting in occasionally moving, yet more often overwrought films that are small in scope and focus.

Film festivals, and Sundance in particular, are littered with films of this ilk, movies that may differ from blockbuster brethren in terms of their subject matter or tone, but often are simply echoes of the same story you've seen many times before at many other fests past. The coming of age, the taking care of a dying friend/parent/lover, the road trip, all tropes that are as tired as shoot-em-ups or found-footage-horror. It's not that tremendous films can come out from under this rut, it's just that the so-called "alternative" world of Indie cinema also has its built in laziness with docile audiences to match.

So it's exciting for people like myself that gorge on cinema for a living to be truly surprised by a work, to see something that you've never seen before. Yet novelty too is another trope, and weird-for-weird sake, or aggressively idiosyncratic or incoherent, can be equally tedious. It's a fine line to draw, between shattering expectations and still allowing the audience along for the ride, and when it comes together one becomes almost giddy.

Such was my reaction to Swiss Army Man, a film that's preposterous and profound in equal measure. It's a film that's generated loads of buzz because a few buyers walked out early, but let me be among the first that I don't care what people who buy films for a living think. This isn't a movie that screams out box office mania, but this is, I believe, one of those films that years later some emerging artist will discover and realize that the potential for their art has expanded just that little bit. That may not be something to bank your money into, but for lovers of film it's a beautiful thing to behold. 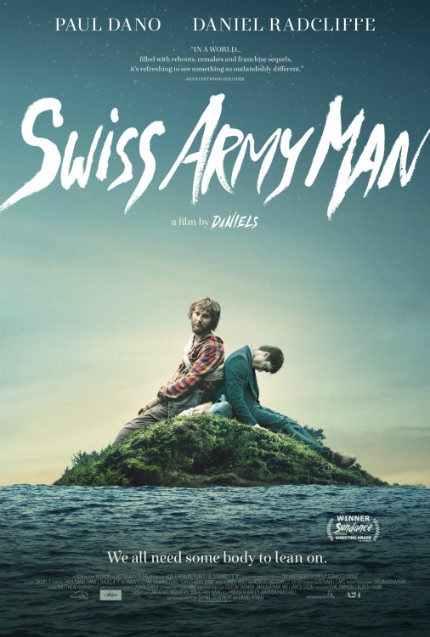 I described the film as the Citizen Kane of fart joke movies, and I stand by that claim (that would make Blazing Saddles the Birth of a Nation of flatulence flicks if you're playing along at home). I would hope that there are a bunch of you reading this that will go into the film cold knowing nothing other than the fact that, yes, there's a lot of farting, and yes, it's kind of amazing how they use bodily gas in an almost symphonic way, with loads of colours and textures, crescendos and diminuendos, all erupting into a symphony of sublime silliness.

Directors Daniels has made a name for themselves doing music videos, I hear after the fact, and that might explain their sense of madcap experimentation (I'm old enough to remember the same sense of wonder when the likes of David Fincher started plying his trade with equally kinetic gimmicks). The film is a fable about friendship, complete with bursts of whimsy interspersed with great sorrow and deep emotionality.

Yet above all it's a film about a man who befriends a corpse, taking the Weekend At Bernie's punchline and injecting existentialist philosophy into the brew. It shouldn't work, and while watching you almost feel it can't work, yet it does, and brilliantly. And while that's no doubt due to some assured direction, it really comes down to two of the finest performers of their generation.

Paul Dano is that kind of performer that you seem to feel deeply when watching him perform. He has the ability to suck you into his suffering, a magical gift of generating empathy that's far too rare. His roles have been diverse and often challenging, yet here we get a kind of pure, uncut version of his craft. It's terrific to behold.

Then there's Daniel Radcliffe. Sure, he's forever for some Harry Potter, but bless those original casting agents that truly made an exceptional find. He's spent his post-Potter career taking risks and I adore him for it. Yet it's the physicality of his talent that's occasionally overlooked, part of what made him compelling even in what for some was dismissed as a wretched Victor Frankenstein. There's a Keatonesque quality to the way he moves, and here, playing a malleable puppet of a character, his near perfect, embodying the role without a sliver of shame or self-confidence. It's a role of pure commitment, with a wide range of emotions that have to be told often through microexpressions and attenuation of voice. He does it brilliantly.

In many ways this film plays like a musical, where you're required to suspend your disbelief and go along with the world the film is creating. I can see for those that immediately shut themselves out from it that it will be a long, hard slog. I genuinely feel bad for those people, just as I would for viewers who balk at in the middle of a dramatic scene the performers suddenly burst into song. In this film, the music comes out of a dead body's ass, and that will be a bridge too far for many.

This is one of the strangest yet most affecting films I've seen in quite some time, a bit of madcap mayhem that feels both contemporary and ancient. There's a purity to the journey that's effective, recollecting the power of the fool in the court to provoke deeper meanings. For those that worry that the archetypal elements are telegraphed, or that somehow the grand reveal is meant to be preceded by suspense miss the point. This is a film that delves deep into its character using a narrative device that's both bold and bonkers.

Swiss Army Man is one of those rare films that manages to shake complacent viewers from their comfort zone while always ensuring that they're in on what's taking place. A truly artistic, truly entertaining film that solidifies both high and low concepts, it's a film unlike any other you're going to see this or any other year.

Review originally published during the Sundance Film Festival in January 2016. The film opens in theaters in New York and Los Angeles on Friday, June 24 via A24 and will roll out nationwide on July 1.

Do you feel this content is inappropriate or infringes upon your rights? Click here to report it, or see our DMCA policy.
Dan KwanDaniel RadcliffeDaniel ScheinertMary Elizabeth WinsteadPaul DanoAntonia RiberoAdventureComedyDrama