NY Indian Film Fest 2016 Review: PARCHED Pleads For Peace And Equality In The Face Of Violence 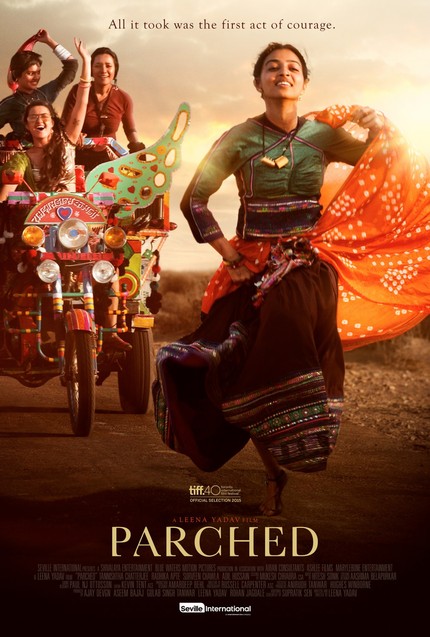 It is dangerous to be a woman in India these days.

While I sincerely hate to paint an entire country with such broad strokes, this is the story I'm told over and over again by the news of deadly gang rapes, infrequent honor killings, tribal marriage pacts made against women's wills, and even friends on the ground in the world's largest democracy. One of the great potential equalizers in the battle for women's rights these days is representation and culture; if you show the problem in a film, people are more likely to believe its real.

As a result, the last few years have seen some of the finest women-centric films in the world, from big budget affairs like Kangana Ranaut's Queen to Pan Nalin's recent success Angry Indian Goddesses, and this most recent attempt to bring the plight of half of India's population, director Leena Yadav's Parched.

Parched is the story of a quartet of women in rural Gujarat who struggle against the oppressively patriarchal power strucutre in their small town to attempt to gain a bit of autonomy. Tannishtha Chatterjee (Sunrise, Angry Indian Goddesses, Chauranga, Monsoon Shootout, Siddharth) plays Rani, the matriarch of a family into whom a woman from a neighboring village is wed. The new bride Janaki, played by Lehar Khan, appears for the wedding having cut off all of her beautiful hair because of lice, setting the entire village a flutter.

Rani's son - and Janaki's husband - is Gulab, a violent drunken child who loves nothing more than flaunting his newly earned status as an adult by spiriting himself off to the local dance troupe/brothel. Holding court at the troupe is Rani's old friend Bijli (Surveen Chawla), a bar dancer par excellence who moonlights as a courtesan for the local drunkards. Holding the group together is the fiesty Lajjo, played by up-and-coming dynamo Radhika Apte, an expert seamtress who longs to have a child with her abusive husband in the hopes that it will both make her whole and settle him down.

Each of these four women suffers at the hands of the men in her life, sometimes physically, sometimes emotionally, but all are expected to grin and bear it. The brutality with which they are all treated makes the film frequently feel like a hopeless exercise in outrage, but thankfully Yadav's exploration of their predicaments is immensely layered and feels very real.

Characters struggle with their identities as mother/wife, Madonna/whore, straight/gay, and all of the other dichotomies the inhabit women around the world. The main point of conflict in Parched, is that they are forced to do it in secret, away from the oppressively patriarchal power structure that demands they remain subservient.

When a progressive man enters the picture (Sumit Vyas) his strange ways vex the locals and mark him as an enemy. He starts a textile business that employs the local women as seamstresses to earn money for their own households which they can use to dictate a tiny piece of their own destiny.

His clients in the city single out the fine work of Lajjo and ask for her to come to them to work on a contract, but her husband, impotent both sexually and emotionally, takes her success as a source of embarrassment and puniches her for even considering it. When she flees his violent outbursts to a mystical cave in the wilds to meet a sexual shaman (Adil Hussain) who awakens a lust she didn't know she had, everything changes, and not entirely for the better.

Parched is about women finding their own bliss. In this old-fashioned corner of India they often have to fight through the scars and bruises to find it, and many never do, but these four make it through the only way they know how, holding each others' hands. This is one of the most exceptional ensemble pieces I've seen out of India in a while, the last one being the abovementioned Angry Indian Goddesses, in which Chatterjee also played a crucial role.

Beyond the story, Leena Yadav's camera does an excellent job illustrating the frustration of the lives of these women. The barren landscape of rural Gujarat shows the overwhelming isolation in which these women live their lives. The fact that it takes a long bus ride to another village to even find an available bride also helps to clarify the world that seems so absolute to Rani, Lajjo, Janaki, and Bijli. It isn't until the seemingly fearless Bijli takes the four on a drive outside of their own little world that the possiblities begin to even occur to them.

Even though this is truly an ensemble film, there are two standout performances that deserve special attention. Tannishtha Chatterjee is no secret among Indian film fans, her performances in indie films over the last decade have proved that she is worthy of praise. Here she grows into her role as mother with grace and power. Many Bollywood starlets the same age as Chatterjee would refuse a role as a mother in a film because that would mean commercial death, but she proves that it isn't the end of the road and remains the most powerful force on the screen.

The other performer who absolutely blew me away is Radhika Apte. Apte is one of the rising stars of Indian independent cinema and has the potential to crossover into international cinema if she plays her cards right. From ultra indie projects like Sudhish Kamath's omnibus experiment X - Past is Present to mega budget star vehicles like Rajinikanth's upcoming Kabali, she's shown no fear and always leaves her mark as a force to be reckoned with. As if my praise weren't enough, Apte recently won an acting award at TriBeCa for her performance as a woman scorned in Anurag Kashyap's segment of the international collaborative project Madly. Mark my words, you'll be hearing a lot more about Radhika Apte, she is poised to become a major star.

Parched is a scathing critique of the intransigence of the patriarchy in rural India, but more than that, it's a celebration of the liberty that comes from smashing said patriarchy. Any film can paint a dour picture and beg for your attention, it takes a special work to reassmble the broken pieces into a thing of beauty, and that is what Parched does.

It takes pain and oppression and uses it to build power in the downtrodden. In the west there has been feminst backlash against using sexual violence as a way to inspire female protagonists to action, but in India, this is the reality, and Parched shows just how strong their love is, and how that love that bring about the change they need to save their own lives and become more than they are. Their lives are painful, their lives are struggle, but in the end their lives are their own, and that's a joy that few are able to claim.