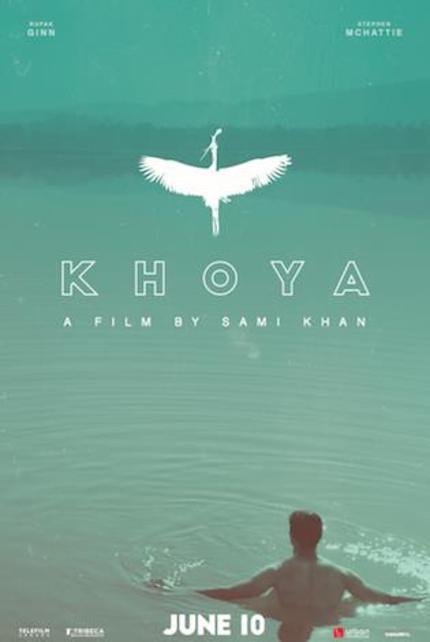 Being a film writer has its ups and downs.

We are constantly inundated by wannabe filmmakers looking to make their mark on the world. Like any other aspirational pursuit, the vast majority of the output from these cold calls is - to put it nicely - awful. However, once in a while something appears out of the blue that is good, and that makes all of the wading through garbage worth it.

Today's example of a film that took me totally by surprise is Sami Khan's Khoya, a drama about an Indian man searching for his birth parents in an India that is completely foreign to him.

Khoya was sent to me by Khan in connection with its screening that the New York Indian Film Festival, though the film had previously played at both the Mumbai Film Festival and Indian Film Festival of Los Angeles. He had written to me with the intention of showing me his film and the caveat that it wasn't very ScreenAnarchy-y material. This is a concern that we run into pretty frequently here. We've built a reputation as a film site catering to the seedier side of cinema, but one of the great things about ScreenAnarchy is that we can write about whatever we want, which gives you the reader more options and more to digest. Khoya is a film that deserves your attention.

Roger Moreau (Rupak Ginn - Royal Pains, The Namesake) is a Canadian adoptee from an Indian orphanage. He knows nothing about his birth parents and never really bothered to ask, but when his adopted mother dies, it sends him into an existential crisis that lands him in Mumbai seeking the answers to questions he doesn't quite know how to ask. His quest for a genetic identity sends him from one orphanage to another, in the meantime learning that his adoption papers were forged and his orphanhood may not have been borne of hard times, but of greed, deceit, and possibly even murder.

What really struck me about Khoya - and here's where my digression begins - was how closely I identified with its protagonist in spite of never having been in his predicament. Roger Moreau is a character who is searching for himself, more than just an identity, he's looking for a connection to his past and a culture that he knows nothing about.

He is Indian in the genetic sense, but having been raised in Canada all of his life apart from that cultural heritage, he has no idea what it means besides the fact that his skin is darker than his parents'. His own culture is foreign to him, and not in any malicious way, it's just never been a thing that he considered as central to his identity, until his mother passed away and he is now forced to reconcile that link to his identity that is now broken.

Khoya affected me on a very deep primal level, far more than I expected. I'm a half-Mexican, half-white American. I was born in California to father who was born in Mexico and a mother whose roots in the US go back hundreds of years (thanks Ancestry.com). I'm far closer with my father's side of the family than my mother's, but even so, I've always felt a certain insurmountable distance between who I am today and the cultural heritage that bore me. If I were to walk into the family bar in Mexico today, I'd be as foreign as any white American would be, but the stigma of being a pocho (a Latino who doesn't speak Spanish) would make me even more of a target of scorn than those people who have the excuse of being born without a Latino last name.

Khoya plays on this insecurity, the insecurity of being a foreigner in your own homeland, to highlight the massive disconnect between genetics and culture. Roger Moreau is a man without a country, without a family, without a hope of finding his true home in India. He's as useless in Mumbai as any other foreigner would be. He doesn't speak the language, doesn't understand the culture, and has no idea where to even start in his search for his birth parents. His trip is a pretty harebrained scheme from the beginning, but there is a nobility and determination in his go-for-broke attitude. Roger's quest is universal, we all want to know where we came from, but for some, the trail is a bit more broken than others.

When Roger discovers that the story behind his own adoption is not as simple as he'd imagined, it sends him on a trip through the poorer orphanages and government offices of India in search of the truth. The truth, however, is not quite as interested in Roger as he is in it, and this leads our hero down ever more dangerous paths.

Khan's treatment of this search, the kind from which it is impossible to back down, feels sincere even as it descends into melodrama. When the truth of his adoption and abduction comes to light, with the help of consumate character actor Vipin Sharma, Roger's search seems to have been in vain. The truth of his adoption is not as black-and-white as he'd hoped, but he soldiers on. I like to think that I'd be as determined in my own search for my identity, but I'm not so sure.

Khoya weaves its way back and forth between the present day search and the events that led up to it. Roger's mother's death, his connection with his uncle Roger, his own guilt over everything that's happened around him, all of these provide the fuel for this quest of self-discovery. Khan's script is quite deft with the moves from present to past, in fact, if anything the transitions are a bit too transparent and could use a bit of emphasis to point them out as a departure from the main storyline, but apart from that the script is solid and the execution is excellent.

Sami Khan was correct when he first contacted me about Khoya, this is not a genre film. There are no decapitations, no car chases, no spectacularly violent action sequences, and no tits. However, there is something much more powerful behind Khoya; It is a debut that deserves notice and there is a heart and a soul that many first time filmmakers fumble, but Khan manages with aplomb. Perhaps it is the four-plus years between conception and execution that has allowed him this grace, but whatever the cause, the effect is powerful, and Khoya is a debut that deserves notice.