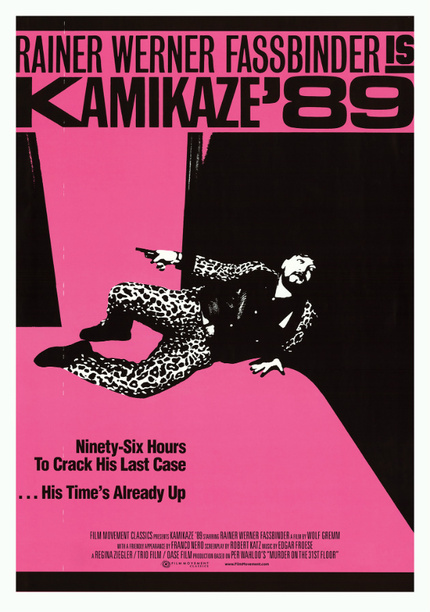 Rainer Werner Fassbinder was a madly prolific filmmaker, completing some 40 features, plus three short films, plus more than one television series, plus two dozen plays and more and more, all in less than 15 years.

Fassbinder was also an actor of brute strength and surprising agility. His final role came in Kamikaze '89 in 1982, which has undergone a 4K restoration that will debut in New York early in June. Before that happens, Film Movement has launched a Kickstarter campaign, which is intended to help with a planned re-release, Blu-ray production, and possibly the creation of a new 35mm print of the film.

Here's an official statement on what is now underway:

Film Movement, the New York-based distributor of independent, arthouse and foreign films, is pleased to announce it has recently launched its first ever Kickstarter campaign to bring Wolf Gremm's neo-noir, cyberpunk cult classic Kamikaze '89 back to theaters and Blu-ray. The film, which made in 1982 and has long been out of circulation in North America, stars German auteur Rainer Werner Fassbinder in his last acting role.

Kamikaze '89 also marks the first large-scale theatrical re-release under the Film Movement Classics banner. The company has set a goal of $20,000 to be raised on Kickstarter by the end of May. The funds will be used to support the theatrical rerelease of a new 4K restoration of the film, as well as to produce a Blu-ray for the Film Movement Classics imprint. If the campaign can raise any additional funds, it will go towards funding the creation of a new 35mm print of the film made from the 4K digital master.

Directed by his friend Wolf Gremm and set in a new wave, dystopian, futuristic Germany, Kamikaze '89 is perhaps Fassbinder's crowning achievement as an actor. The film, in which he is wearing a signature Leopard skin suit, also marks Fassbinder's last collaboration with longtime muse Brigitte Mira and co-star Franco Nero, of Django fame as well as the star of Fassbinder's final project as a writer/director, Querell. Kamikaze '89 also features an electronic score by Edgar Froese of Tangerine Dream, who, as a band, defined the sounds of many cult classic films: from William Friedkin's Sorcerer to Michael Mann's Thief and Kathryn Bigelow's Near Dark.

Film Movement's Kamikaze '89 Kickstarter campaign will include reward-based pledge levels starting at $5 and will offer items such as original theatrical posters; CDs by composer Edgar Froese of Tangerine Dream; zany audio clips made by director John Cassavetes to promote the original release; pre-ordered DVDs and the Blu-rays of the film; a BAM Date-Night package; and for a contribution of $5000 or more, the original camera prop that is used in the film.

Starting June 3, BAMcinématek will be the first venue to premiere this restored film during a weeklong theatrical run. Gremm's widow and producer of Kamikaze '89, Regina Ziegler, will be in attendance. Other screenings around the country will take place in Seattle, Philadelphia, and Winchester, Virginia.

To donate to the campaign, please go to the official Kickstarter page.