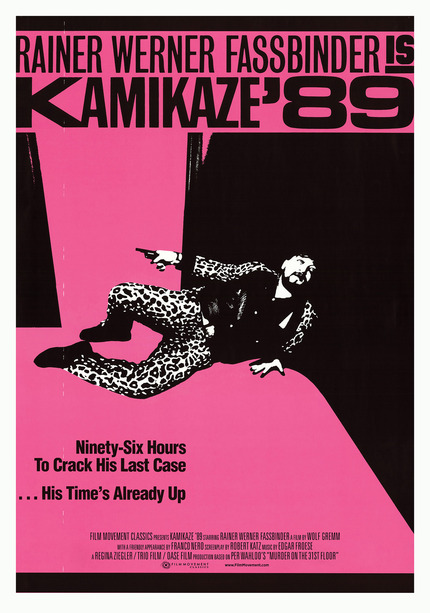 Arthouse film fans will know the name Rainer Werner Fassbinder as one of the great guiding lights of the German new wave in the '70s and '80s. However, he also acted quite a bit throughout those years, mostly in his own films, but occasionally in films by other directors with whom he felt comfortable. His final onscreen performance in Wolf Gremm's Kamikaze '89 may just be the craziest thing Fassbinder ever did as an actor, and that's saying something.

Wolf Gremm was a director with little mainstream success at the multiplex. He only made a handful of theatrical features in the '70s and '80s before refocusing his career on TV movies from 1982 through 2011. In fact, KamiKaze '89 was his final theatrical feature, and watching it now, it's not surprising to see why production companies weren't keen to give him more money for big films. Kamikaze '89 stands today as a kitschy neon noir, kind of an unholy combination of Miami Vice and Double Indemnity, a real oddity that probably didn't light up the box office on it's release.

It's a post-apocalyptic film noir set in a future where crime has disappeared, but only because the authorities have found new and exciting ways to explain it away. Fassbinder plays Lieutenant Jansen, a police investigator who is assigned the job of sniffing out the culprit of a bomb threat that is set to destroy The Combine, a centralized media empire that is in charge of all information. As Jansen, perpetually attired in a snappy leopard-print suit that is a couple of sizes too small, gets closer and closer to the truth, he finds out that not only is the truth a moving target, but it also has him firmly in its own sights, making the investigation a race against time.

Gremm's film is littered with early '80s Eurotrash staples. Lots of liquor, half-naked - or sometimes more - women populate several scenes, and a fantastic score from Tangerine Dream's Edgar Froese set the tone for a film that is never what you expect it to be. Fassbinder's performance is full-bore, the actor performs as the director lived, to the hilt, leaving no scenery unchewed and no subtext unexplored. The result is an unexpectedly action-packed film noir that is equal parts Night and the City, Cafe Flesh, with touches of Mad Max for those with shorter attention spans. It really is a trip.

Kamikaze '89 is a truly strange, unique, and unignorable masterpiece for both Gremm and Fassbinder. The film trades on a million and one stereotypes and yet manages to defiantly blaze its own path through the underground cinema wilderness. You've never seen anything like this, and it's unlikely that you ever will again, and that's a beautiful thing as uniqueness is in such short supply these days.

Film Movement Classics brings Kamikaze '89 to Blu-ray following an unsuccessful crowdfunding campaign that was at least encouraging enough to show FM that interest was high enough that the show must go on. The film had never had a DVD release in the US, and producing a new Blu-ray was going to be tricky, but they've done a reasonably good job with this one. The image is surprisingly detailed and colorful, however, there are several murky spots on the frame that persist through the entire running time of the film. In fact, dead center of the frame is a dark spot that is clearly visible, along with similar spots at the top and right of the frame. These are quite distracting, and make me wonder how they got through QC. Since they are static for the entire film, it seems as though it wasn't a film issue, but an issue with the scanning equipment. I really hope that they get this issue fixed for future films because otherwise the disc is impeccable.

Film Movement steps up from their Once Were Warriors release in terms of extras by including a pair fo feature length bonuses with Kamikaze '89. First up is Rainer Werner Fassbinder: The Last Year, a documentary narrated by Wolf Gremm that tracks Fassbinder as he moves from the shoot of Kamikaze '89 to Querelle as his final days move nearer and nearer. It's a fascinating document of a man at the end of his very short life. On the disc with the film is also a commentary track with producer Regina Ziegler that is quite informative if a bit formal for me, perhaps its the language barrier skewing it for me. Lastly the Blu-ray also holds some amazing radio spots for Kamikaze '89 read by none other than American indie icon John Cassavetes. These are spectacular and sound like no other radio spots or trailers you've ever heard.

Also included in the package is a DVD with the documentary Wolf at the Door, a memoir from Wolf Gremm that tracks his life after a diagnosis of bone cancer. This is a deeply affecting and warmly expressed piece that is in deep juxtapostiion to either of the features on the Blu-ray disc. Gremm talks at length about the nature of mortality and his need to live the rest of his life in happiness among friends and family. It's an uplifting tragedy, especially given the Gremm ultimately succumbed to his illness in 2015, right before Kamikaze '89's rediscovery.

This disc is exceptional, and Kamikaze '89 belongs in the collection of any serious film collector and certainly any fan of Fassbinder or the German New Wave. Highly recommended.