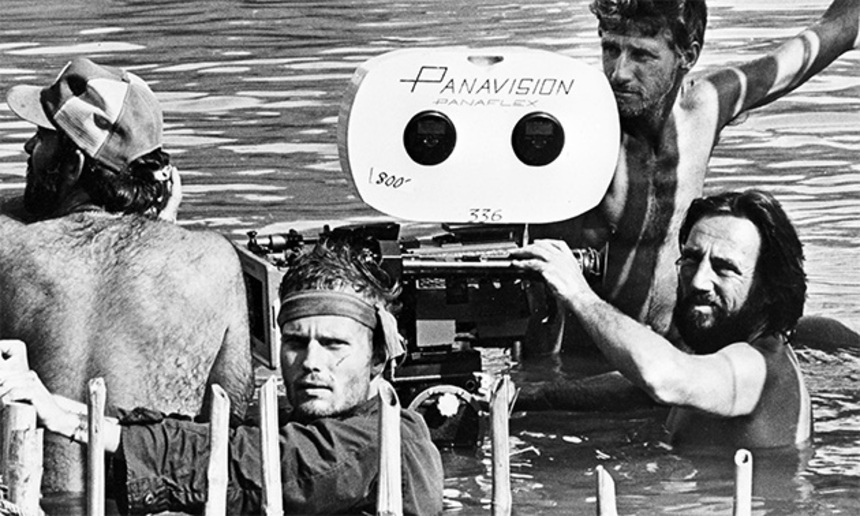 From the opening shot where the subject is adjusting the lighting, tweaking the seating height, futzing with back illumination and checking the camera's gamma, you know that Close Encounters With Vilmos Zsigmond is not an everyday documentary. But Vilmos Zsigmond isn't your everyday cinematographer, either, and in this one scene you can see him take a decent shot on digital video and make it just a bit more...perfect.

We've seen plenty of docs on DOPs before, including the lovely survey film Visions of Light. As a tribute to the late filmmaker Close Encounters With Vilmos Zsigmond does an admirable job introducing the man's work over the span of decades with a series of clips and interviews. From a warm roundtable of American Society of Cinematographers legends to specific recollections by Directors, actors and fellow shooters, one gets a broad overview of how this one Hungarian immigrant to America helped redefine the look of world cinema.

Aspects of VZ's personal life are touched upon, including his relationship with his wife, to buying his Big Sur retreat through to his smuggling out of footage of the Soviet invasion of his home country. But for the most part the film focuses squarely on his successes and cult favourites, showing through sympathetically selected clips the majestic imagery he captured.

A few of the interviews were particularly energizing, including a wonderfully candid discussion by Peter Fonda over the closing shot of his Hired Hand. For the most part, the doc is a full on celebration, but some of the more stormy moments are at least alluded to, including VZ's clear contrition years and when he neglected to thank his director when accepting the Oscar for shooting Close Encounters of the Third Kind.

While the likes of Altman have obvious reasons for not being able to participate, it's Steven Spielberg's absence that's most felt, especially given the particularly pointed title. Clearly their second collaboration wasn't an easy one, and it would be nice for this to feel like a full on gush to at least contextualize the situation from the opposing point of view.

Still, snagging Steven can't be an easy get, and one can't fault the film too much (there's still time, after all, for this to be added!). What is here, however, is catnip for cinephiles, and a perfect excuse to make one want to marathon everything from Altman to DePalma, from Cimino to Boorman, all to take in some of these most indelible of images.

As a survey of the man's work it's near complete, as what has resulted in being a memorium to a legend the film is even more vital. By capturing the man in his many environments - a hot pool, overlooking Budapest, sitting in a screening room - one gets the sense that we're meeting a genuine article, one both humble and yet proud of his accomplishments. As a warts-and-all take on the man's work it may falter, as a perfectly encapsulated close encounter with a giant of the last half century of film it's a priceless testament.

Do you feel this content is inappropriate or infringes upon your rights? Click here to report it, or see our DMCA policy.
Cannes 2016Close Encounters With Vilmos ZsigmondDocumentaryVilmos Zsigmond