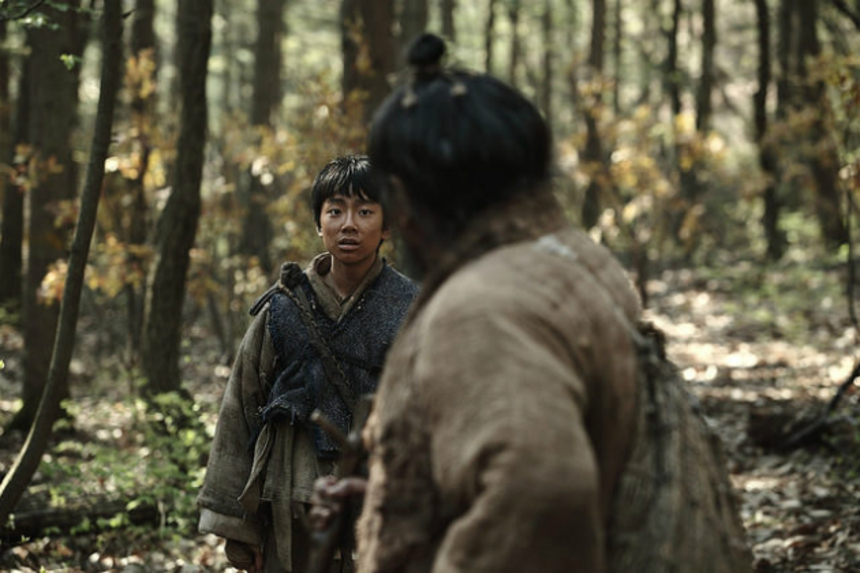 In a small town in Italy, a very special film festival is preparing to unfold under the sign of the tiger.

The 18th edition of the Far East Film Festival in Udine, Italy, will open on Friday, April 22 with the international premiere of Park Hoon-jung's The Tiger. Our own Pierce Conran had some issues with the film, but his review concluded: "There's no denying The Tiger is a singular, epic work with much to admire."

The festival will also be featuring the animated debut of Johnnie To. It's "30 seconds of pure auteur beauty," also known as the festival trailer. To will also be present in behalf of gangster movie Trivisa, which he produced.

On the closing night of the festival, Sammo Hung will be present to collect his Golden Mulberry Award for Lifetime Achievement. His latest film, The Bodyguard, will also be screening.

Here's the official announcement from the festival.

"For some it's a symbol of strength. For others, a symbol of freedom. Yet for many more (especially those who have read Emilio Salgari's swashbuckling novels) it's a symbol of resistance and rebellion. And for the Far East Film Festival it is above all a symbol of energy: the energy needed to realise a cultural initiative and the energy - along with the ability not to take yourself too seriously - to announce the fact. In any case, it's certainly no coincidence that the eighteenth edition will be held under the sign of the tiger. Or, to be precise, under the sign of The Tiger, Park Hoon-jung's moving blockbuster which will roar its way to its international premiere on Friday the 22nd of April!

"That alone would make for a memorable Opening Night, but Park's fierce South Korean tiger, thirsty for blood and justice, won't be roaring alone: one of the FEFF's oldest and dearest friends will be returning to the spotlights of the Teatro Nuovo. Who? A genius called Johnnie To, that's who! And the unforgettable winner of the very first Audience Award for A Hero Never Dies will have two tasks: as producer, to present to the public the gangster movie Trivisa, a sumptuous compendium of Milkyway's style (and happy twentieth anniversary guys, by the way!), and as director, to officially cut the ribbon with the festival trailer that bears his signature!

"Yes - the FEFF is coming of age, and to celebrate the event in style it's decided to give itself and its audience something truly priceless: 30 seconds of pure auteur beauty. 30 seconds where Johnnie makes his 'debut' in animated film (which, it goes without saying, is already a gift inside the gift) and where his vision meets the music of an extraordinary composer: Lim Giong (a gift inside the gift inside the gift!), Cannes award winner for the soundtrack of The Assassin! What more could you want from opening night?

"Perhaps, for symmetry's sake, we ought to expect an equally memorable closing night too, so here's the closing night of the 30th of April for you: a date to put in your diary in fluorescent marker, because it's the night when Sammo Hung - the actor, director and action choreographer who over the decades has indelibly revolutionized cinema martial arts - will be taking the stage at the Far East Film Festival! After Joe Hisaishi and Jackie Chan, the two superstars who appeared in 2015, another legend will be collecting his Golden Mulberry Award for Lifetime Achievement. Considered an icon at home and adored around the world, Sammo will be accompanying his film The Bodyguard (International Festival Premiere) to Udine, delighting fans and consolidating the international reputation of the FEFF, which grows with each passing year.

"But let's - briefly - allow the figures of this 18th edition speak for themselves: 72 films in the official selection, of which 50 in competition, from 10 geographic regions of Asia (5 world premieres, 10 international premieres, 8 Festival Premieres and 37 Italian premieres, of which 18 European premieres), over 100 events scattered throughout the centre of Udine (among which the inevitable Far East Cosplay Contest on the 24th of April) and more than 150 volunteers ready to roll up their sleeve and help out the staff of the Festival from the 22nd to the 30th of April.

"A full, diverse programme which also contains the FEFF Campus, the school of journalism for young European and Asian talent, and the international Ties That Bind workshop, which for years has been putting Western and Eastern producers in touch. And let's not forget about the pre-opening event: an extraordinary 21st of April with Constanza Macras's show The Ghosts (the umpteenth triumph of the Teatro Stabile di Innovazione del Friuli Venezia Giulia)!

"New for 2016 is Focus Asia, the business event which will be held at Udine's Cinema Visionario on the 27th, 28th and 29th of April and will see FEFF working together with MIA - the International Audiovisual Market of Rome (together with the Fondo Audiovisivo del Friuli Venezia Giulia and DG Cinema - MIBACT). A first step towards reinforcing relations between Europe and Asia to offer buyers an overview of the most recent genre productions.

"Alongside a packed competition section, which will see the best Pan-Asian titles of the last season competing for the 2016 Audience Award (blockbusters, cult movies, outsider titles and auteur films, like the highly anticipated Three Stories of Love by Ryosuke Hashiguchi), there will be an info-screening of the anthology film Ten Years, as well as once again parallel sections devoted to documentaries (don't miss The Lovers and the Despot, preview of Biografilm Festival), one dedicated to the Fresh Wave Festival (the young voices of Hong Kong), one dedicated to fear (a big comeback for Horror Day and the very first appearance on the Udine screen of the great Kurosawa Kiyoshi: a cruel journey into the darkness and the psyche titled Creepy!), and another dedicated to exhibitions (from the contemporary Japanese art of Paradoxa to the world of comics with Vincenzo Filosa's Viaggio a Tokyo).

"This year, in addition to the obligatory tribute to the history of Asian cinema, which will touch upon Bruce Lee's yellow jumpsuit and offer up four absolute must-sees (the brand new restored 4K versions of Fist of Fury, The Big Boss, The Way of the Dragon and Game of Death), the eye of the FEFF will also focus on the glories of Japanese science fiction in a retrospective of 10 films and a publication entitled Beyond Godzilla, both curated by expert Mark Schilling, which will have as guest of honour the legendary director Obayashi Nobuhiko.

"'Fans,' writes Mark Schilling, 'have long considered Japan a science fiction cinematic superpower, especially as regards one specific sub-genre - movie monsters (kaiju eiga) - and one character: Godzilla. In fact, the Japanese science fiction films of the Fifties and Sixties, which were packed full of space rockets, UFOs and all kinds of exotic weapons and gadgets, may have been inspired by Hollywood's alien invasion films, but their unique style, their energy and their imagination have influenced not only Japanese animators and directors, but also their counterparts in the West.'

"So all that remains is to make a date at the Teatro Nuovo, the historical home of the Far East Film Festival, and wait for Johnnie To's trailer to officially set the ball rolling. Which film will be the thunderbolt that stuns audiences this year? A debut with a capital 'd', like Yoon Ga-eun's The World of Us, or perhaps the amazing Ola Bola, which shows us the world of Malaysian football? An intense romantic drama like Larry Yang's Mountain Cry? Or maybe Xu Zheng's unique road movie Lost in Hong Kong, which exploded at the box office in the former British colony? The funny and tragic story of redemption Mohican Comes Home by Okita Shuichi (with a surprising punk-hipster Matsuda Ryuhei)? Or could it be the world premiere of Hime-Anole, which, on the 25th of April, will bring Japanese teen idol Morita Go down the FEFF 18 red carpet (yes, it's all true, dear fans, it's all true!)?

"If you want to find out you'll just have to wait until the night of the 30th of April - even though, as we all know, tigers aren't exactly the most patient of creatures!"

More about The Tiger

More about The Bodyguard (Sammo Hung)