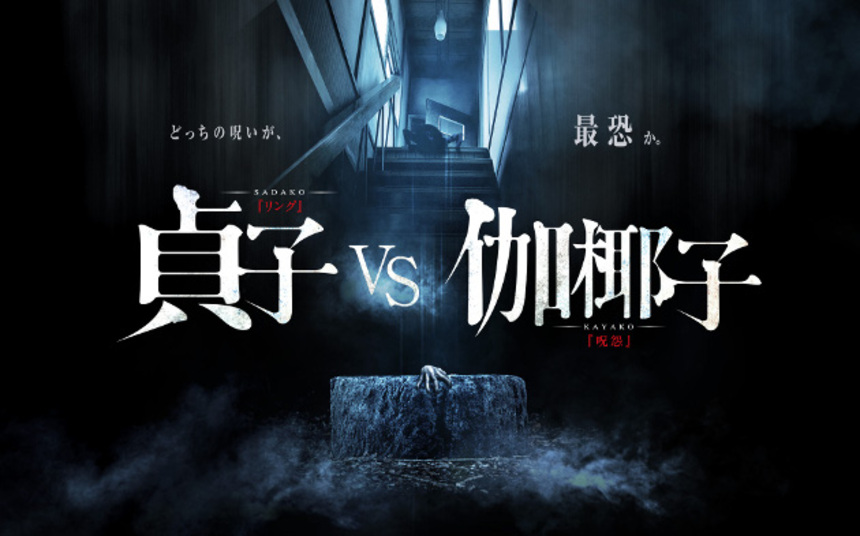 Here's the surprising thing about upcoming Japanese horror film Sadako vs Kayako: It looks like they made an actual movie, one that not only stands on its own terms but also appears to have significantly better production value than the most recent entries in the Ring and Grudge series that spawned it. Not only that, but it looks like a ton of fun.

Let us recap for the unfamiliar:

Back in 1998 Nakata Hideo directed Ringu (The Ring). Adapted from a popular novel it tells the story of a cursed video tape that will unleash the inevitable, unstoppable wrath of a ghost named Sadako when watched. The film became a monster international hit, both spawning a hit US remake and triggering what became known as the J-horror movement worldwide.

Two years later, in 2000, a former understudy of Kurosawa Kiyoshi by the name of Shimizu Takashi released a pair of super low budget straight to video offerings titled Ju-On: The Curse and Ju-On: The Curse 2. The preise was, again, simple. An angry spirit named Kayako - along with her equally angry and equally dead son, Toshio - remain in the house where they were killed and when someone enters into that house they become the target of Kayako's curse, which then spreads by contact. Simple, yes, but also scary as hell and when these early video offerings spawned a higher budget theatrical version in 2002 Ju-On - known internationally as The Grudge - exploded on the international scene becoming arguably the largest and best known of the J-horror franchises fueled by its own iconic female ghost. For those keeping score, director Shimizu has essentially made this exact same film six times including the first straight to video offering, which has got to be some sort of record.

Both Ringu and Ju-On triggered long running series (with a bit of googling you can find video of Sadako throwing out the first pitch at a Japanese baseball game in a PR stunt for one of her solo spin off films) which now collide in Sadako vs Kayako in which, you guessed it, video tape ghost and house ghost clash. A brand new trailer has just released for the film showcasing the most footage that we've seen yet and quite a lot of ghost on ghost stare down so if you had any concerns that this would end up being a film that happened to feature both ghosts as opposed to a feature in which the pair of them actually come into direct conflict, those fears would appear to be misplaced. Take a look below!

Do you feel this content is inappropriate or infringes upon your rights? Click here to report it, or see our DMCA policy.
horrorj-horrorjapanju-onringosadako vs kayakothe grudgethe ringtrailer