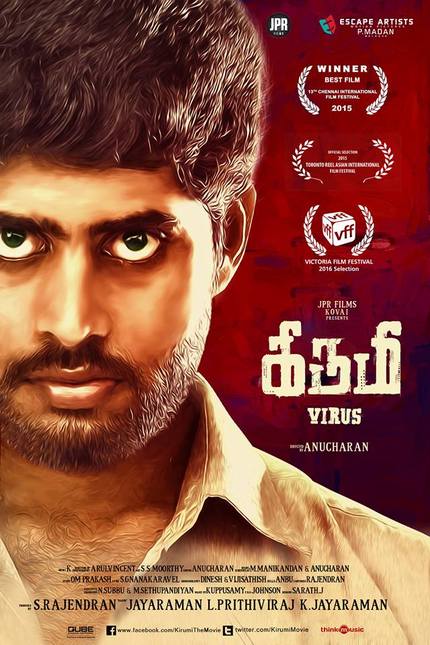 Director Anucharan's debut feature, Kirumi, is the kind of calling card that every filmmaker dreams of. This thrilling drama boasts well drawn characters, enough twists and turns to keep the audience guessing, a visual style that is confident without feeling flashy, and solid writing; all of the elements needed to give a rookie a leg up on his competition. This tale of a hustler trying to get his piece of the pie is not unlike an Indian version of Goodfellas, only with the roles all confused. Cops become robbers, robbers stay robbers, and snitches play both sides.

Kathir (Kathir) is a young man on the grind. He's broke as a joke, but trying to make ends meet for his family with one hustle after another, sadly nothing seems to stick. He has a beautiful wife and infant at home, but he spends most of his time just hanging out with his friends, who also seem to have nothing but an abundance of time and pride on their hands. When his neighbor and mentor, Prabhakar (Charle), hips Kathir to the fact that he works as a police informer, the light in the young man's head goes off, and it's all downhill from there.

Kathir works the dirty jobs that are given to local layabouts by the corrupt police as a way of keeping them in check and the cops coffers full. When Kathir begins to show his value to the force, his position as majordomo to the cops on the make quickly solidifies, but too much is never enough. When he gets in between a pair of feuding police inspectors over a local illegal card game, a close friend gets caught in the crossfire and suddenly Kathir goes from hero to goat, and before he knows it, he's running for his life.

Kirumi, which translates in English to Virus or Germ, is Anucharan's first feature, but he's very fortunate to have some talented help in making this film work. The film was co-written by Manikandan, who recently had a huge critical and commerical hit in India with Kakkaa Muttai (The Crow's Egg), a film that many called the best Indian film of 2015. Their script is a pitch perfect example of how to write a thriller. The film never plays for too long without something to grab the audience. Subplots never feel extraneous and always help the viewer connect with characters to whom they need to feel a emotional bond. There are no clear cut heroes, no clear cut villains, but everyone's scheming does claim plenty of victims.

From the opening strains of the brilliant score by Indian composer K, Kirumi sets a tone that is unmistakable and unique. Yes, this is a crime story, and even though the characters aren't overtly criminals, they are very clearly nobody's heroes either. Kathir, while he is definitely our protagonist, is far from a white hat in this film, as established within the first reel which shows him visiting not only his wife, but his mistress as well. In spite of all of his faults, though, we sympathize. Manikandan and Anucharan have written him as a character with a believable arc that wams the viewer to his cause, even as he begs, borrows, and steals his way through life.

I've said it before, but it certainly bears repeating, Tamil cinema is the most exciting foreign cinema in the world about which no one seems to care. Every year for at least the last half dozen, something great has come out of Tamil Nadu, and every year I'm shocked when those films get passed over. Is the stigma against Indian cinema so strong that it overwhelms cinephiles' curiosity? Kirumi takes some of the greatest themes of recent Tamil critical hits -- corrupt police, low level hoodlums, underworld conniving -- and gives them a new and exciting voice.

Kirumi's characters, along with those in films like Visaranai, Aadukalam, Jigarthanda, and Soodhu Kavvum, exist in a recognizable world shared by the best of Tamil Nadu's filmmakers (Vetrimaran, Karthik Subbaraj, and Nalan Kumarasamy, respectively) . These amazing artists have created a body of work that is closing in on similarly iconic visions like New York in the '70s, Japan in the Samurai era, or occupied Hong Kong that is instantly recognizable to viewers willing to take the chance. The only difference is that those worlds are well known by film fans, and gritty Tamil Nadu is looked over.

Anucharan is clearly as student of film just as much as he is now a teacher. Kirumi is one hundred percent Indian, and even moreso, one hundred percent Tamil; but at the same time embraces the world of western gangster films that has influenced filmmakers, and film fans for decades. In the future, film scholars will look back on these years in Tamil cinema and wonder how they managed to sleep on it for so long. Consider this your wake up call, Kirumi is a great film that deserves a broader audience. The new Indian cinema is here and waiting for you to pay attention, all you have to do is give it a chance.

Do you feel this content is inappropriate or infringes upon your rights? Click here to report it, or see our DMCA policy.
Anucharanifflaindian film fest lakirumitamilM. ManikandanCharlieDavid Solomon RajaMarimuthuTamilselviCrime