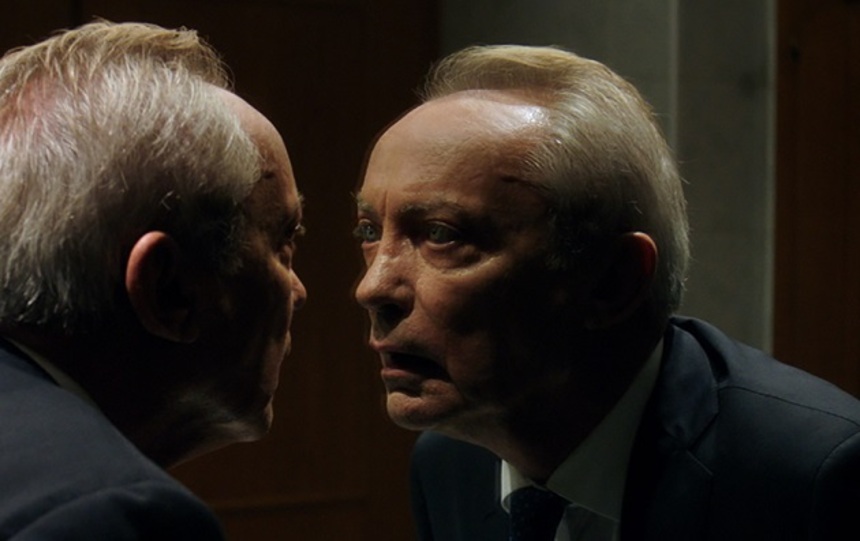 This year, the International Film Festival Rotterdam had a section dedicated to television series. In it, you could see episode-collections shown as films, and films that are soon to become adapted as television series. But one of the most spectacular entries was a full-length screening of David Schalko's 2015 series Altes Geld (meaning Old Money), all eight episodes in one gargantuan 375-minute long chunk. I was much tempted to go see it, because the festival's synopsis was hilarious:

An evil billionaire needs a liver transplant and ignites a war among his children, one of whom will be the only heir if (s)he provides him a liver. According to its author, this leads to a "Dallas for psychos", which at the very least provides some crazy fun and Austrian decadence.

Wowzers! Need I add that the billionaire is played by Udo Kier? An absolutely fantastic career-best-level Udo Kier even?

Still, 375 minutes make more than six hours, and during the festival I couldn't free that much time for it. Annoyingly, everyone who saw it kept telling me how great it was, one even saying that "six-and-a-half hours flew by as it it were six-and-a-half minutes". Grrrr...

Luckily, the Austrians have already released the series on DVD and Blu-ray. Even more luckily, these releases include excellent English subtitles. So when this arrived on my doorstep last week, I immediately plopped in the first disc, and watched it. Or, as I should say, binge-watched it. For it truly is a great, funny, and thoroughly wicked, wicked series. The synopsis is a good one, and the series wastes no time in reaching its premise: Rolf Rauchensteiner is the leader of an industrial empire and diagnosed with several types of Hepatitis, meaning he'll die in a year if he doesn't get a new liver. Being a billionaire, getting a new liver shouldn't be all that difficult, but Rolf gets a few nasty surprises: when you're in the spotlight, organs are hard to get illegally when you need legal surgery afterwards, and getting a liver legally means every agency involved tries to blackmail Rolf out of all sorts of favors, if they don't sabotage him outright.

Disgusted, Rolf presents his chosen solution to his family: the one who provides him with the liver he so desperately needs, will be the sole heir to his empire.

As the Rauchensteiners aren't exactly a family overflowing with empathy, this announcement is at first greeted with scoffs and sarcasm by Rolf's children, and open dismay by his current wife. But soon the race is on, especially when Rolf falls ill faster than expected. And things get a lot dicier when friends, in-laws, business partners, crooked scientists, politicians and gangsters (both foreign and local) try to shift the odds in favor of their chosen champions...

For starters, the Rauchensteiner dynasty had its roots in both Hebrew Israel and Hitler's Nazi party, meaning Rolf had an interesting childhood to say the least. His empire has been involved in every political corruption scheme in Austria for the last half-century, and the current generations of his family treat drugs and incest as party games for beginners.

Writer-director David Schalko soon shifts things into higher gear, as people's plans coincide or crash messily, and more and more colorful side characters are introduced. Many of the people in Altes Geld are decadent and irredeemably corrupt, and gleefully contemplate murder as a means to an end. All actors are visibly having a field day playing their parts in such a poisonous group, but a special mention must be made of Udo Kier. The man is simply magnificent here, and I even think I've never seen him better than here. His Rolf is icy, arrogant and manipulative, but when you consider the pit of vipers he tries to survive on a daily basis you stop hating him after a while, and as his health deteriorates (creepily shown by the yellowing of his eyeballs) cracks appear in the character's armor, allowing for pity. Fun though the series in its entirety is, when Udo is absent for long periods of time you do long for his speedy return.

But David Schalko keeps all his story-lines spinning well enough to never have the series stalling for long, and he carefully manages to mix the shockingly extreme with everyday reality. On top of that it all looks and sounds great, polished, sometimes suitably baroque even. Altes Geld is a caustic satire, a hilarious thriller, and a spectacularly sadistic soap all in one. If this sounds like your cup of tea, do not hesitate to check it out. Do you feel this content is inappropriate or infringes upon your rights? Click here to report it, or see our DMCA policy.
Udo KierSunnyi MellesNicholas OfczarekEdita MalovcicComedy