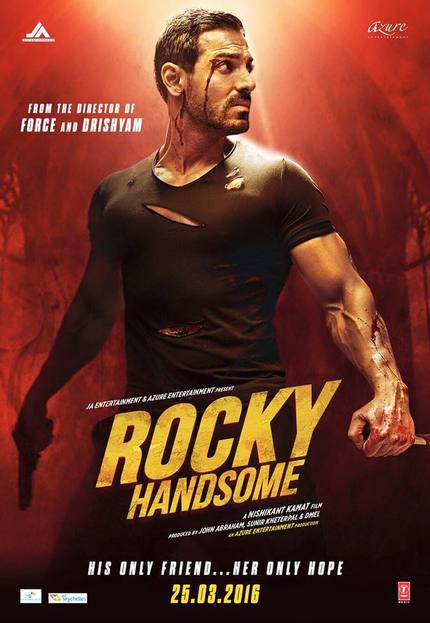 I am also an evangelist for mainstream Indian cinema, I see the boisterous cacophony of sounds and colors and the way these dovetail with one another in an often glorious melange of textures, both emotional and physical, of which Western film can only dream. I want the world outside of India to see what I see, it's become something of a calling for me.

Then something like Rocky Handsome happens and I wonder why I even bother.

Director Nishikant Kamat's Rocky Handsome is a remake of 2010 South Korean revenge thriller The Man From Nowhere. The latter is a superb example of a niche genre that South Korea has mastered in a spectacular way. In the years following Park Chan-wook's Oldboy, the revenge thriller has become the hallmark of South Korean cinema, and of the massive catalog of films in this genre over the last 15 years, The Man From Nowhere is in the very top tier. It is a nearly perfect film. Ridiculous and over the top in all the best ways, vicious and visceral, the film utilizes a kitchen-sinky hodge-podge of exploitable elements to create a perfect storm of violent redemption.

Rocky Handsome, on the other hand, takes each of those elements and explains it into submission, rendering the visceral impact of the film moot. If you've never seen The Man From Nowhere -- a film I highly recommend -- the plot is as follows: A man takes care of a young girl in his apartment complex who is the daughter of a junkie. When the girl is kidnapped the man shoots, punches, kicks, and stabs his way through an army of drug peddling, organ harvesting, child selling gangsters to get her back. Individually, all of these elements are at home in Hindi gangster cinema, collectively, this should have been a grand slam. The nature of the Bollywood market, however, cripples what should've been a taut thriller and turns it into just another song and dance.

John Abraham stars as Kabir Ahlawat, the "man from nowhere," nicknamed "Handsome" by his young friend's mother. This is where the trouble starts. I made the critical mistake of watching the original film in the morning before heading out to my screening of the remake, just to refresh my memory so see where liberties were taken.

In The Man From Nowhere, Won Bin plays the protagonist and is able to fade into obscurity specifically because he looks like any average guy. John Abraham, on the other hand, is a massive hulking figure, at 6 feet tall he towers over every other character in the film, making it difficult to blend in. Not only is he tall, he has the physique of a professional wrestler, an attribute he's used in the past to sell workout videos in India. This stark contrast in leading performers is just the beginning of a thousand missteps that sink Rocky Handsome pretty much from the word go.

The film opens with an extended romantic song sequence featuring Rocky's lost love, Rukshida (played by Shruti Hassan), which takes away almost all of the mystery behind his sullen appearance. The man from nowhere suddenly has a past, and he has yet to throw a single punch. Now, it's difficult to make a film in the Bollywood studio system without a love story, but it can be done. Rocky Handsome just chooses to circumvent that aspect of the character's arc by explaining it away right off the top. A huge mistake.

Apart from the horrendous miscasting -- John Abraham produced the film, so it's hard to fault him for wanting to play the role, but still... -- there is the question of faithfulness to the source material. Bollywood has no dearth of dodgy remakes in its past, but over the last decade they've at least had the decency to start licensing the original works so as not to draw legal ire.

This doesn't exactly avoid all issues, though, as sometimes slavishness to a certain film's every beat can lead to false notes, especially when you transplant the story to another culture. In the case of Rocky Handsome, Kamat and Abraham make no adjustments for shifting the setting of the film to Goa, and the results are embarrassingly lazy.

Almost every major scene in the film is cribbed entirely from the original, dialogue and all. Ritesh Shah is credited as adapting the film from the source, but he should probably have just been given a translator credit, since that is all he really does. But the original is great, so why wouldn't this film be just as good? Well, John Abraham's performance in incredibly wooden, and at the oher extreme his antagonists, Kamat as Kevin and Teddy Maurya as his brother Luke, are cartoon villains. None of the performances are believable, and the action, where to start with the action...

Action choreography in films is not unlike dancing. There are pre-planned moves that must be executed perfectly in order to sync up with your scene partners in a way that is believable. One would think that in an industry like Bollywood, where dancing in films isn't the exception but the rule, action choreography would be easy for veteran performers to master.

Except that John Abraham is one of the worst dancers Bollywood has to offer for the exact same reason that Salman Khan is probably the other worst dancer in the nation: they are just too damned big to do the steps. John Abraham has muscles on muscles, which means he looks great in clothes, and not too shabby out of them, but his flexibility is nil. His action sequences are designed to look like he's cutting through his opponents like a hot knife through butter, but what it actually looks like is that he's sleepwalking through the moves, even when -- perhaps especially when -- he's supposed to be in the most pain. It's horribly distracting and cringe inducing, and saps all of the urgency from the violence, making it look dreadfully staged.

Speaking of dreadfully staged, Rocky Handsome also forces its audience -- who no doubt showed up to see some asses get kicked -- to sit through no less than three Bollywood production numbers. Where do these fit into a story of a former special agent murdering dozens of hoodlums with guns, kinves, and his bare goddamned hands? Wherever the hell they want! Apart from being jarring digressions at some of the tensest moments in the film, they are just horrendously choregraphed, stupidly overlong, and embarrassing inclusions in what is already a trainwreck of a film.

Rocky Handsome didn't have to be as bad as it is, that is probably the most infuriating thing about it. Yes, John Abraham is a terrible choice to play the lead. However, if the adaptation wanted to submit itself to the market fully, rather than simply including a few songs for the sake of selling ringtones, it could have been something interesting. Make your adaptation your own, don't simply run the original script through Google Translate and hope for the best!

Every year I find a few great mainstream films from India that deserve attention that they never get. Whether it is last year's NH10 or Badlapur, or 2012's Agneepath (people will fight me on this one, but it is everything I love about Bollywood), it's always an uphill struggle to get people to give these films a chance. Rocky Handsome is the reason that people don't want to listen. It is the epitome of lazy Bollywood filmmaking. This is the kind of film that someone will see on Netflix in three months, watch it because they are feeling adventurous, and immediately swear off Indian cinema forever the second the credits roll, if they even make it that far.

I've dug in far too deep in this world to give up on my evangelism now, but Rocky Handsome is the kind of film that tests my faith. Save yourselves before it's too late.